The prayers of families in Faleasiu-uta have finally been answered following the commissioning of a water supply project.

In his keynote address, Tuilaepa said the Samoa Water Authority has achieved a milestone as water has now reached Faleasiu-uta and towards Lepale and Fasito'o-uta.

According to the Prime Minister, the project also included the construction of a 250 cubic meters tank by King Construction, which was also funded by the E.U Budget Support at the cost of $134,550.

A 5.4 kilometre pipeline was also installed by Bluebird Construction and was funded by the World Bank at a cost of $531,333.25, through its Enhancing the Climate Resilience of Coastal Resources and Communities Project. 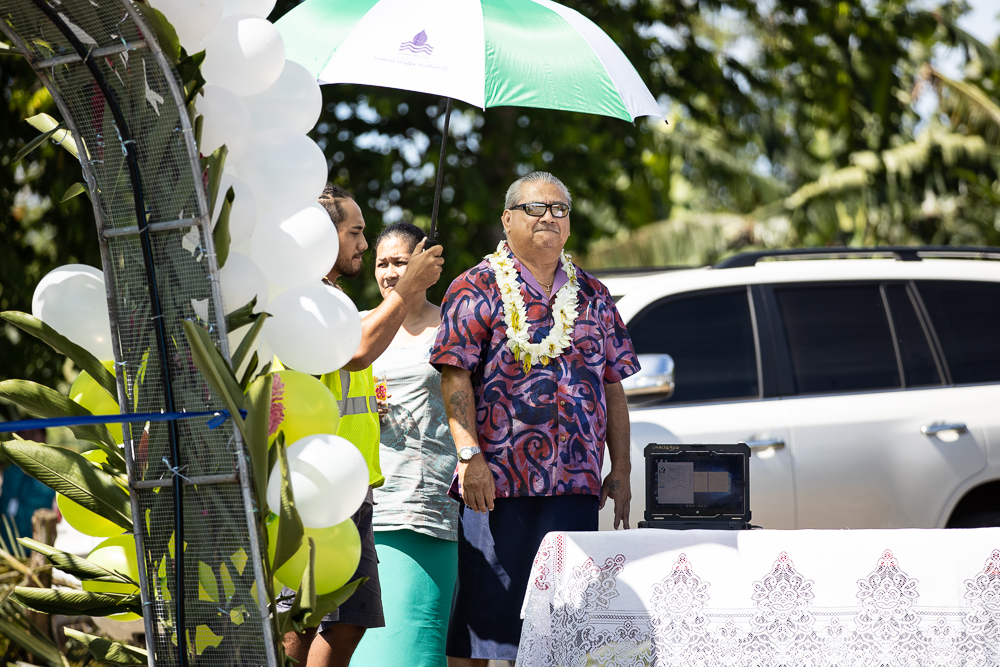 Material cost for all works totalled $896,470.92 which was also funded by E.U. Budget Support.

The second phase of this project is supplying water from the borehole to Upper Sapulu Faleasiu, Lepale, and Fasito'o-uta and consisted of three packages.

Package 1 of Phase 2 was a 13.2km pipeline installation at Upper Sapulu which was installed by Lucky Construction at the cost of $1,000,957.06 and funded by the World Bank.

Package 2 consisted of a 7.6km pipeline installation at Lepale that was installed by Bluebird construction at the cost of $709,318.83 as well as a 250 cubic meter water tank set up by Bluebird Construction at a cost of $91,136.12 and Package 3 consisted of a 10.8 kilometre pipeline installation at Fasito'o-uta at a cost of $799,586.30 which was all funded by the E.U. Budget Support.

Faleasiu-uta village mayor, Sauvao Maiava, told the Samoa Observer in an interview that their village prayed every day for water to be installed.

"Generations have passed and they did not receive this, this generation is thankful for the water that we now receive," he said. "The water we used before this project was from the rain. Water tanks were used for rainwater but some families did not have any water tanks.”

Sauvao, who is 68 years old, said this is the third time he has served as the village mayor and their village is happy that water has finally been connected.

"I am very thankful. I am now 68 years old and I thank the Government for the project that has been completed in our village. Water should be used wisely and not wasted," he said. "I thank Tuilaepa and the Government because the majority of the village now has access to water."

G7 commits to rebuilding economically from the impacts of the COVID-19 global pandemic.

Parties in an Aana Alofi No. 1 seat legal dispute have adhered to court orders they advertise their intentions to withdraw post-election legal challenges saying doing so is in their best interest and their constituency's.