Welsh referee, Nigel Owens, has admitted that the International Rugby Board, now called World Rugby, changed the law for referees after the controversial end to the clash between Manu Samoa and the Springboks during the 2011 Rugby World Cup.

But the world record holder for the most test matches refereed stopped short of admitting that he should never have refereed the clash, which saw Samoa lose to South Africa, 5-13, the narrowest scoreline between the teams in history.

Speaking during an interview with Super Sport Rugby, Owens also admitted that the red card he gave to Manu Samoa fullback, Paul Williams, at a critical point of the game, was a recommendation from the Television Match Official (T.M.O.).

“It was a huge learning curve for me,” Owens said.

“Here I was caught in the cauldron of the huge rivalry between Samoa and South Africa particularly at the World Cup.” 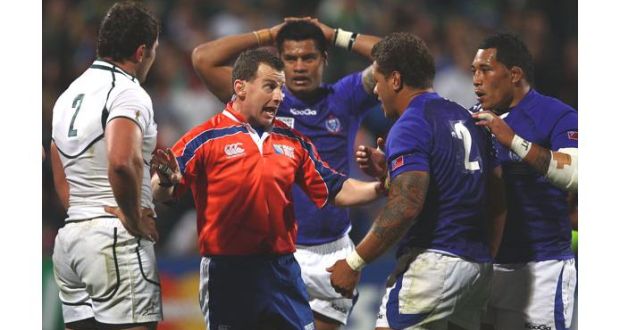 The Welshman said the atmosphere was tough.

“I was up against it even before the game because Samoa, South Africa and Wales and Fiji were in the same group at that World Cup.”

South Africa had beaten Wales during the pool game and Wales was getting ready to play Fiji. Wales needed to win to advance to quarterfinals. Samoa also needed to beat South Africa to get through.

“If Samoa beats South Africa and Fiji beats Wales, Samoa would be through as the runner up in that group and all of a sudden some of the Samoan press, or some of the players before the game and even the public were saying you (Owens) shouldn’t even be refereeing this game. There was lot of pressure going into that game with all this hype going around this.”

The Manu Samoa certainly did their part to put Owens on notice.

“I remember going into the Samoan changing room and the players barely looked at you, you could feel they didn’t want you to be there. It was a real strange feeling, it was the first time I experienced this.”

The referee recalled that the game a “brutal, brutal” clash.

“So no matter what decision I was going to give in that game, I was going to be up against it.  And it changed after that world cup,” he said. “After that in 2015 and 2019, you wouldn’t referee a game if your team was in the same pool because it just took away that perception from people.

“It made no difference to me, you know if Samoa had won that day and Wales had lost the following day then I’m there to do a job. Wales went on to beat Fiji.” 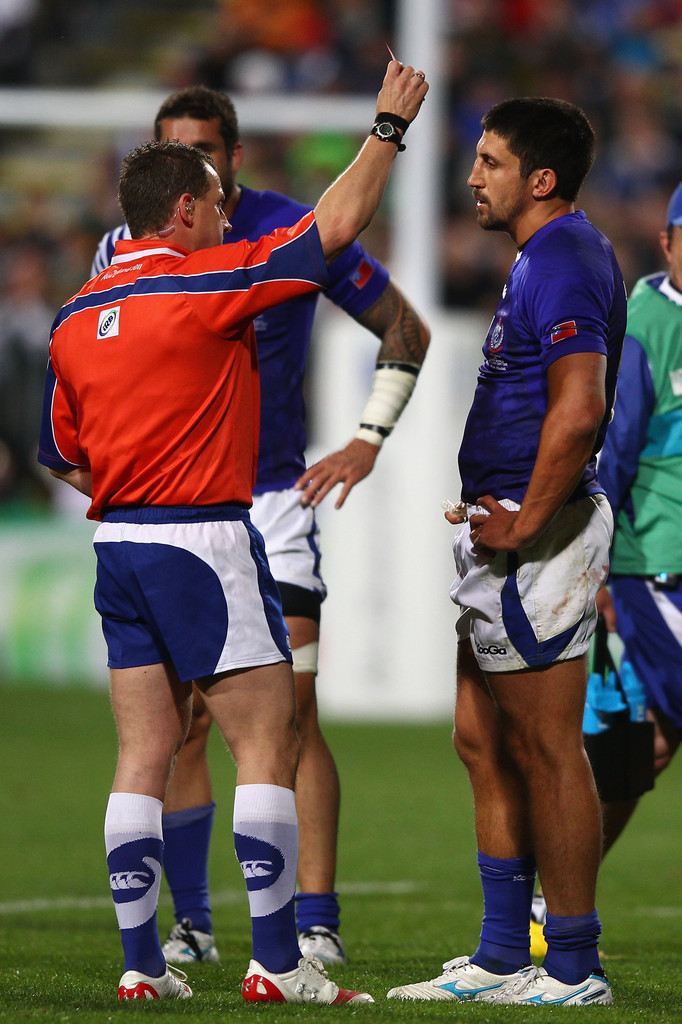 As for the red card that ended Samoa’s hopes of beating the Springboks, the Welshman said he didn’t make the decision alone.

“Paul Williams was sent off on the assistant referee advice,” he said.

“I didn’t see the incident myself, it was brought to my attention, we checked with the T.M.O. who came in and said Paul Williams had chucked a punch.

“I asked him what’s your recommendation and he said recommendation a red card so we sent him off. The pressure was massive, it was a huge learning curve for me in that game.”

Owens handling of the game was heavily criticised by the international press at the time who felt that the Manu Samoa, captained by Mahonri Schwalger at the time, was hard done by. 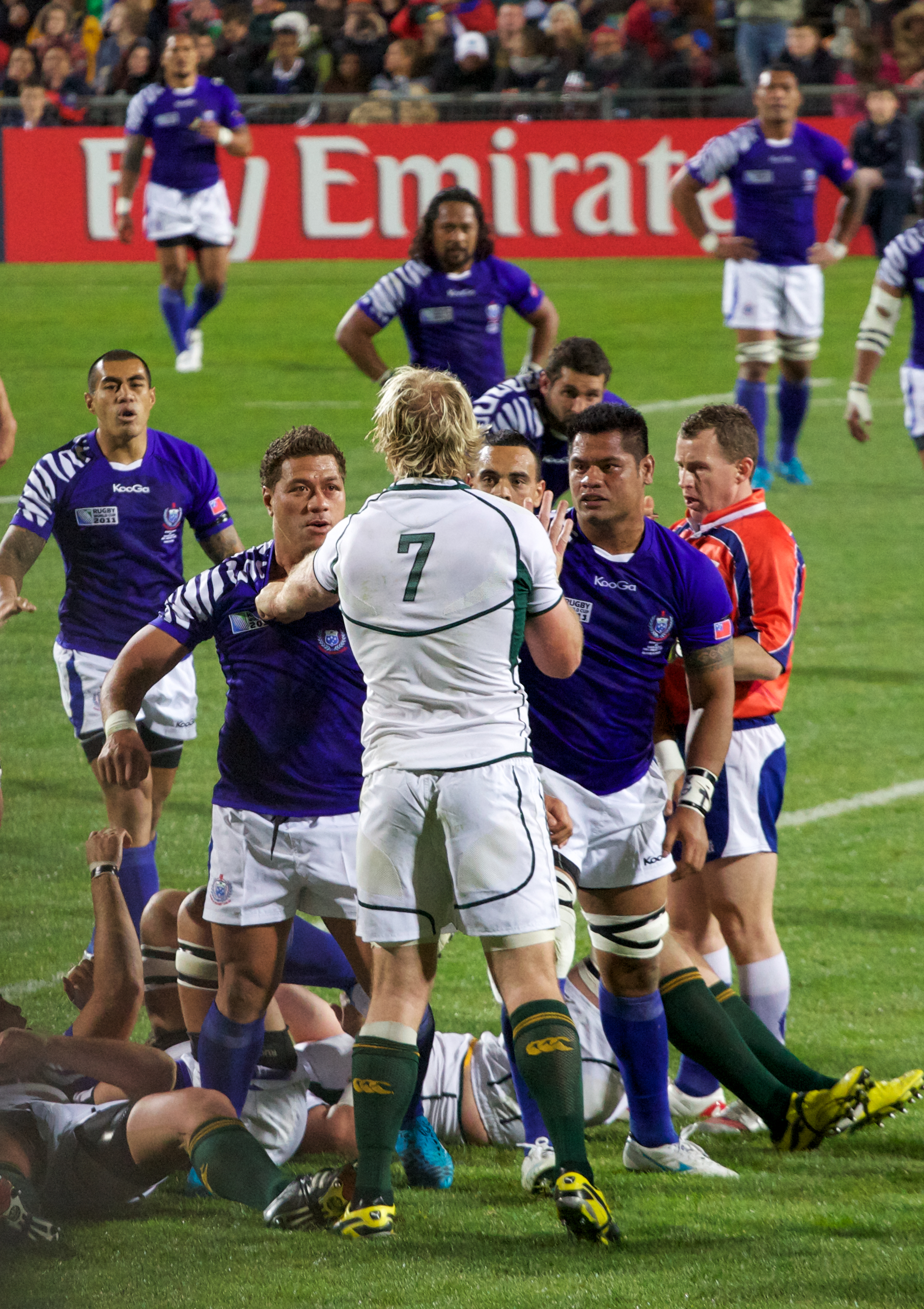 Manu Samoa centre at the time, Eliota Fuimaono-Sapolu, did not hold back on his criticisms of Owens.

"Wow! Just watched the game! Man we got some horrible calls,” Fuimaono-Sapolu said.

"[It] wasn't about world cup today. RWC has been invalidated when they give us half the rest as the rich. It was about us v world champs.

"Get s.a into next round. The plan was obvious. Can't wait 2 meet irb members in public."

He also called Owens a "racist, biased prick" and the Rugby World Cup a "f***ing joke".

Fuimaono-Sapolu said Owens should never have refereed the game as the result of the game was pivotal in determining whether his native Wales qualified for the next round.

"[I] feel for him a bit. He's a victim of IRB script writing. He should’ve never refereed that game given the conflict of interest."

At the time, Owens hit back on his Facebook page, telling supporters: "I go out to referee every game to the best of my ability.

“Fairly and honest, just like the way I have been bought up to be. I am human and will make mistakes on the field, and will hold my hand up when I do, and if I do that I shall have no regrets.

“But one thing I am not is racist and a cheat. I am the last person who would be racist, am gay and know what its like to be in the minority.”