A 22-year-old from Magiagi has topped his Bachelor of Commerce programme and taken top honours in the National University of Samoa online graduation.

Fa’aiva Tolupeni told the Samoa Observer that the sleepless nights studying for his final exams as well as working on assignments has paid off.

“All my life (not just in university), I had befriended midnights with my mother bringing me coffee every night to keep me awake while I study,” he said. “Since Friday until today, my feelings have been and are indescribable. The one thing I wanted was to help my dad bring food on our table.”

Mr. Tolupeni acknowledged the hard work that his family did to ensure all his university fees were settled as well as purchase stationery, despite the financial challenges that it created for them.

“If there is one challenge I can never forget was my family struggling to pay for my school fees but despite it being a major havoc in our family, my parents have never failed to provide for my education and I am blessed to have such parents,” he added. “They made sure I don’t miss a stationery and I know everyone is aware that as our education moves forward, so are the prices for the stationery [items], especially in university but my parents never failed to provide me with that.”

In fact at one time, Mr. Tolupeni was forced to work part-time at the casino in town in order to help his father pay the bills as well as his school fees. Consequently, after the exams in November last year, he found himself a job at the office of the local accounting firm Binder Dijker Otte (B.D.O). 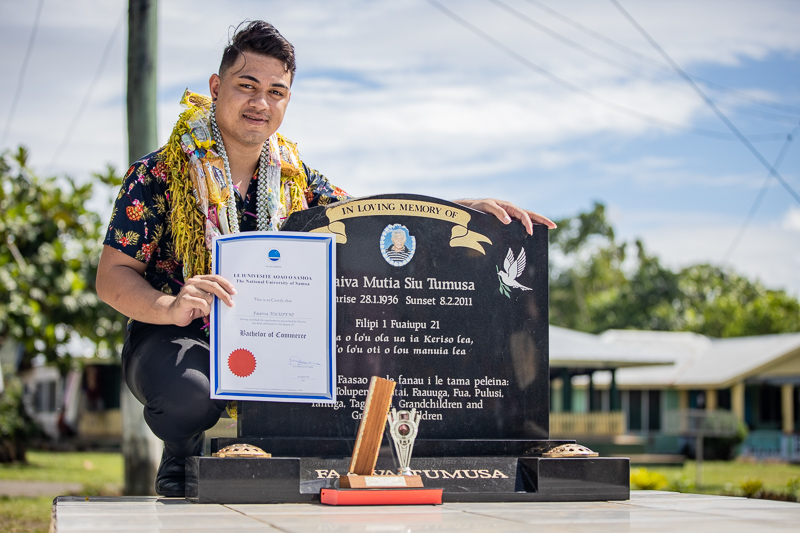 His dream is to become a successful accountant in the future to learn and assist in the economic challenges facing his family and Samoa.

According to his proud mother, Susana Tolupeni, her son’s achievements were worth the sleepless nights they shared.

“My poor son has had a habit of staying up so late to study even if it’s not his exams,” she said. “I’m just super proud and all thanks to God for guiding us through the challenging years trying to pay his school fees as well as my youngest daughter.”

After receiving his award along with other top students on Monday, his extended family hosted a small party at Magiagi on the same day to mark his graduation and the completion of his studies.

“Having them with me through my journey was an inspiration and I cannot wait to make a change in my family in God’s will,” he added.

Mr. Tolupeni also paid special tribute for his award to his late grandfather and namesake, Faaiva Tumusa Tolupeni as well as his church, village and country.

“One thing I’ve noticed while receiving my award today was that the awardees were all females and I was the only male,” he said. “Quite often that males find it believable in the saying that females are more successful than males but if we put our hearts into it and focus on our dreams, nothing is impossible.”

Mr. Tolupeni is the second born among his three siblings.