Princess To‘oā Tosi Malietoa, daughter of the late Head of State His Highness Malietoa Tanumafili II, and Mrs. Greta Percival with a cake to signify the occasion. (Photo: Vaitogi A. Matafeo)

Deputy Prime Minister, Fiame Naomi Mata'afa, members of the diplomatic corps and community leaders on Friday joined members of the Bahá’í community at Tiapapata to mark the 75th anniversary of the signing of the United Nations Charter.

The celebration at the Bahá’í House of Worship began with an interfaith devotional service featuring scriptures from Hinduism, Christianity, Islam and the Bahá’í Faith, and in four languages: Samoan, English, Japanese and Hindi.

Titled “Flowers of One Garden,” the program was dedicated to unity in diversity, a fundamental tenet of the Bahá’í Faith. The service ended with a prayer recited by two children, representing the future of humanity. 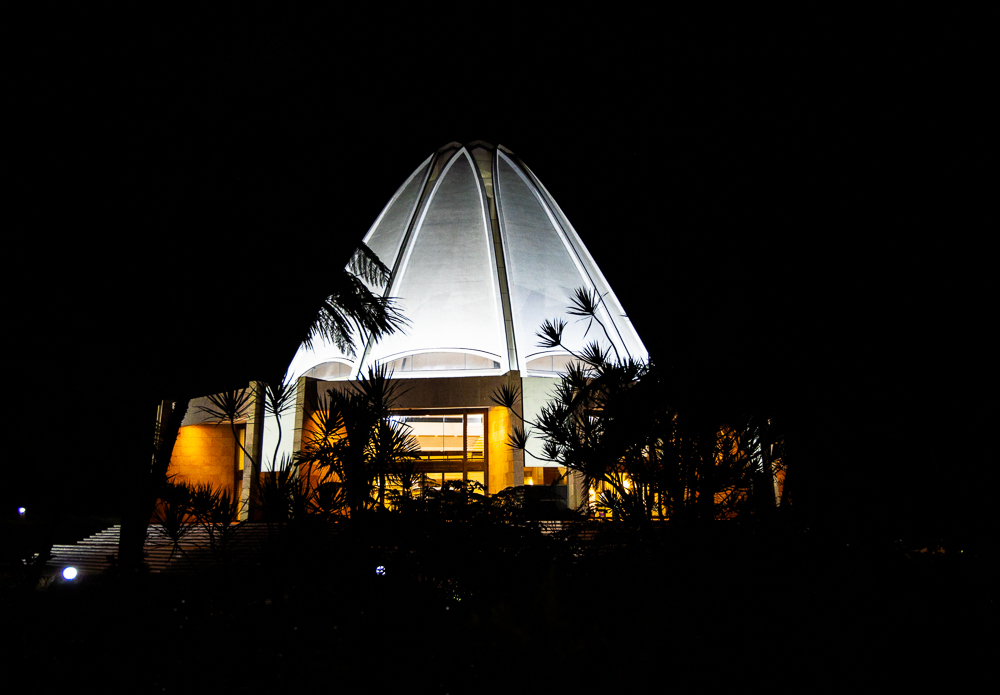 The reception that followed included a video message from Simona Marinescu, the U.N. Resident Coordinator, who has been unable to return to Samoa due to the coronavirus [COVID-19] global pandemic.

She referred to the adoption of the United Nations Charter that 50 nations signed in San Francisco 75 years ago as one of the most important events of the 20th century.

“The Charter,” she went on to explain, “was ratified on the 24th of October, 1945 and, ever since, has defined our identity as a humanity aiming for peace and justice, solidarity and shared prosperity, values that guide the work of the United Nations everywhere. Ever since, in the name of unity and peace, nations come together under the United Nations flag committing to never allowing the mistakes of the past century to repeat themselves.” 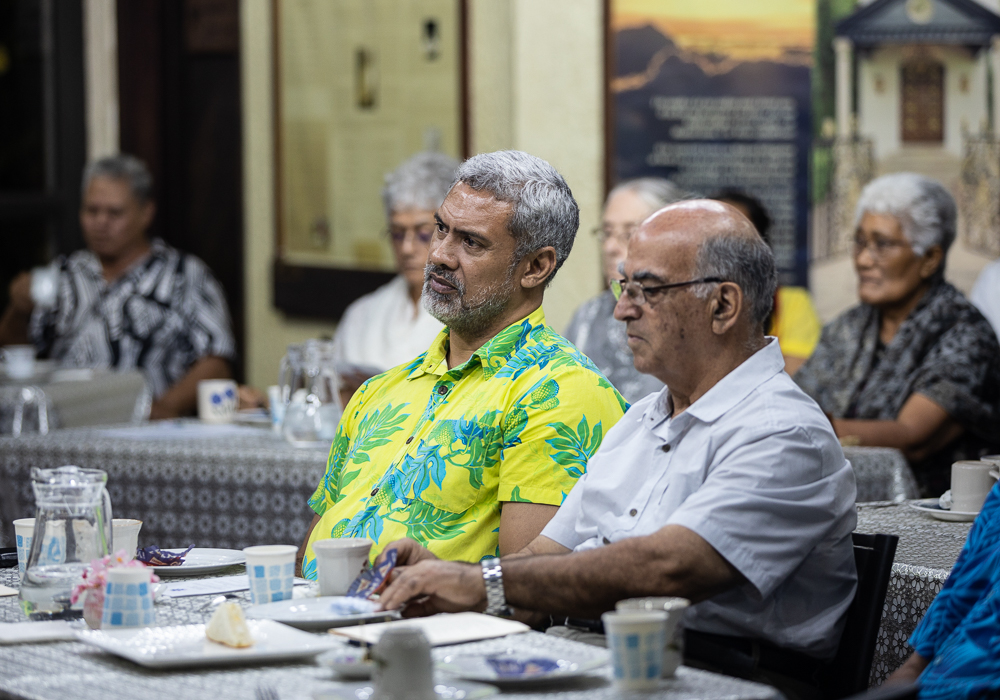 “The aspirations, the vision and the mission of the United Nations are, in many ways, closely aligned to those of the Bahá’í Faith whose watchword is unity in diversity.,” a spokesman for the Bahá’í community stated.

Baha'u'llah, the Founder of the Baha'i Faith, wrote that “The well-being of mankind, its peace and security, are unattainable unless and until its unity is firmly established.” 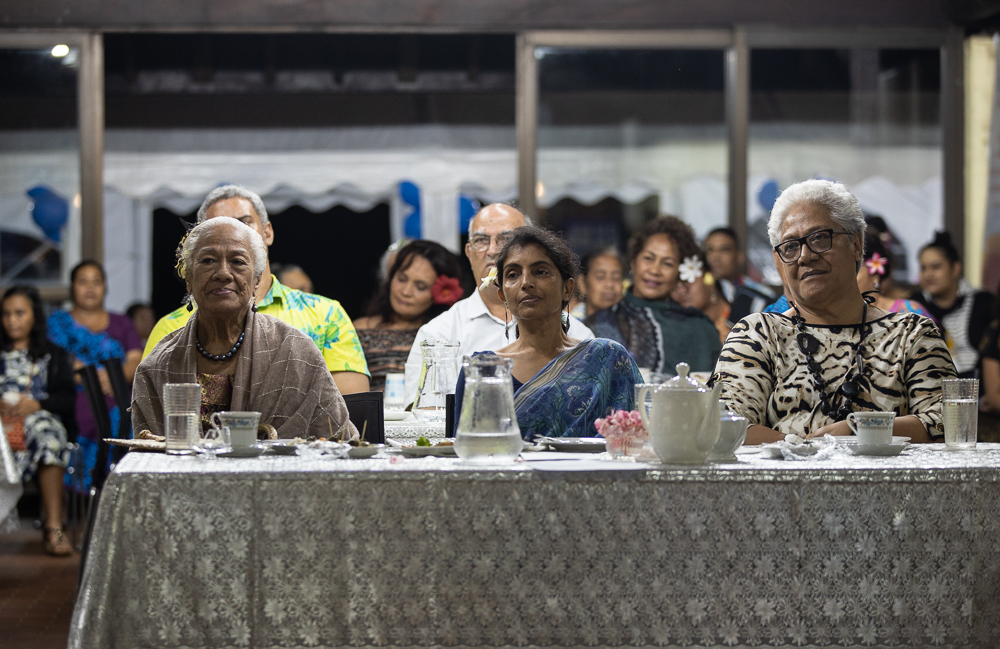 A cake with candles arranged to form a 75 was fanned out by two elders of the Bahá’í community to the singing of happy birthday, Princess To‘oā Tosi Malietoa, daughter of the late Head of State, His Highness Malietoa Tanumafili II, and Mrs. Greta Percival, who recently celebrated her 90th birthday. 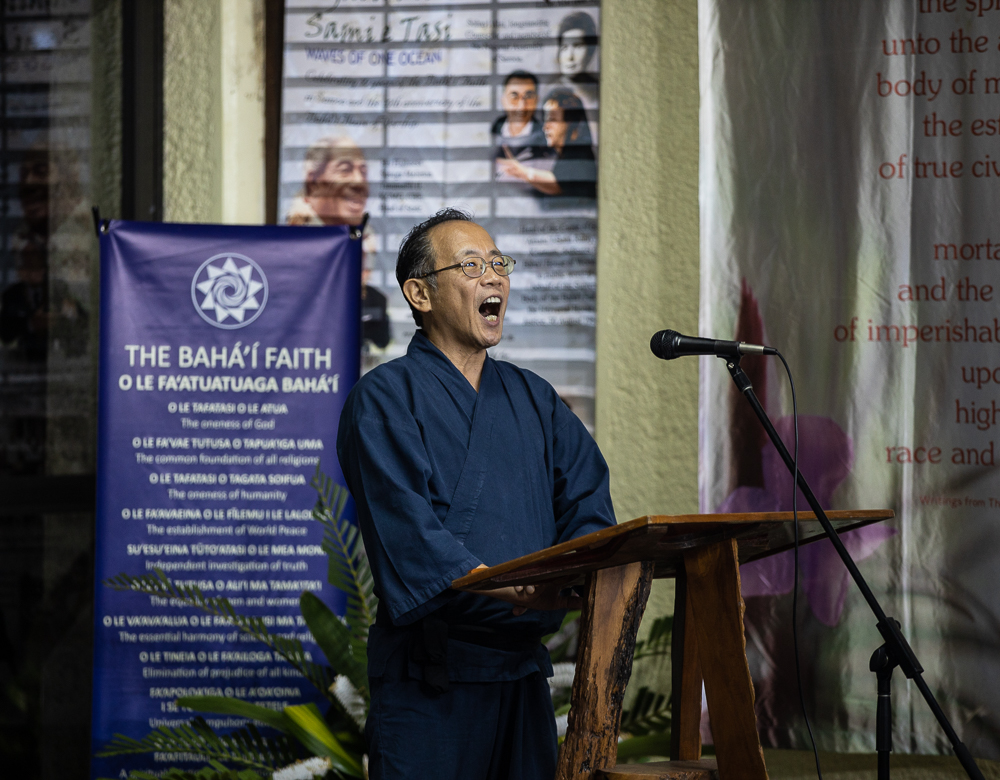 A highlight of the evening added further color to the theme: the recital of ancient Japanese poetry in an equally ancient style of chanting by the Ambassador of Japan to the Independent State of Samoa, His Excellency Genichi Terasawa. Selected from a collection titled “Man-you shuu,” the poems were known to be sung and recited over a millennia ago ago – from the then Emperor to ordinary people.

“The poem,” the Ambassador explained, “is rich in imagery and beautifully captures the enchanting seascape of Samoa on a quiet night.” Much to the delight of the audience, the Ambassador sang the poem not only in Japanese in an ancient style of Japan, but also in English and Samoan using the same style.

Cloud waves rise in the sea of heaven.

The moon is a boat that rows till hides in a wood of stars.

(Tentatively translated in Samoan language by Embassy of Japan staff)