Chlamydia can lead to an increase of infertility in women and other health complications such as ectopic pregnancy amongst women of childbearing age in Samoa, an expert says.

These first, national-level prevalence estimations of a variety of sexually transmitted infections (S.T.I.s) was published by the World Health Organisation (W.H.O.) earlier this year.

The research covered rates of syphilis, gonorrhoea and chlamydia in women aged between 15-49 in Fiji, the Federated States of Micronesia, Papua New Guinea and Samoa between 1995–2017.

According to the report, Samoa holds the highest estimated prevalence of chlamydia amongst the four countries in the study.

While Chlamydia has fallen by about 10 percentage points in Fiji and Papua New Guinea, infections rates have fallen only slightly in Samoa where the disease affects 30.6 per cent of all women.

Rates of infection were found to have risen slightly in the Federated States of Micronesia but remain significantly lower at less than 25 per cent. 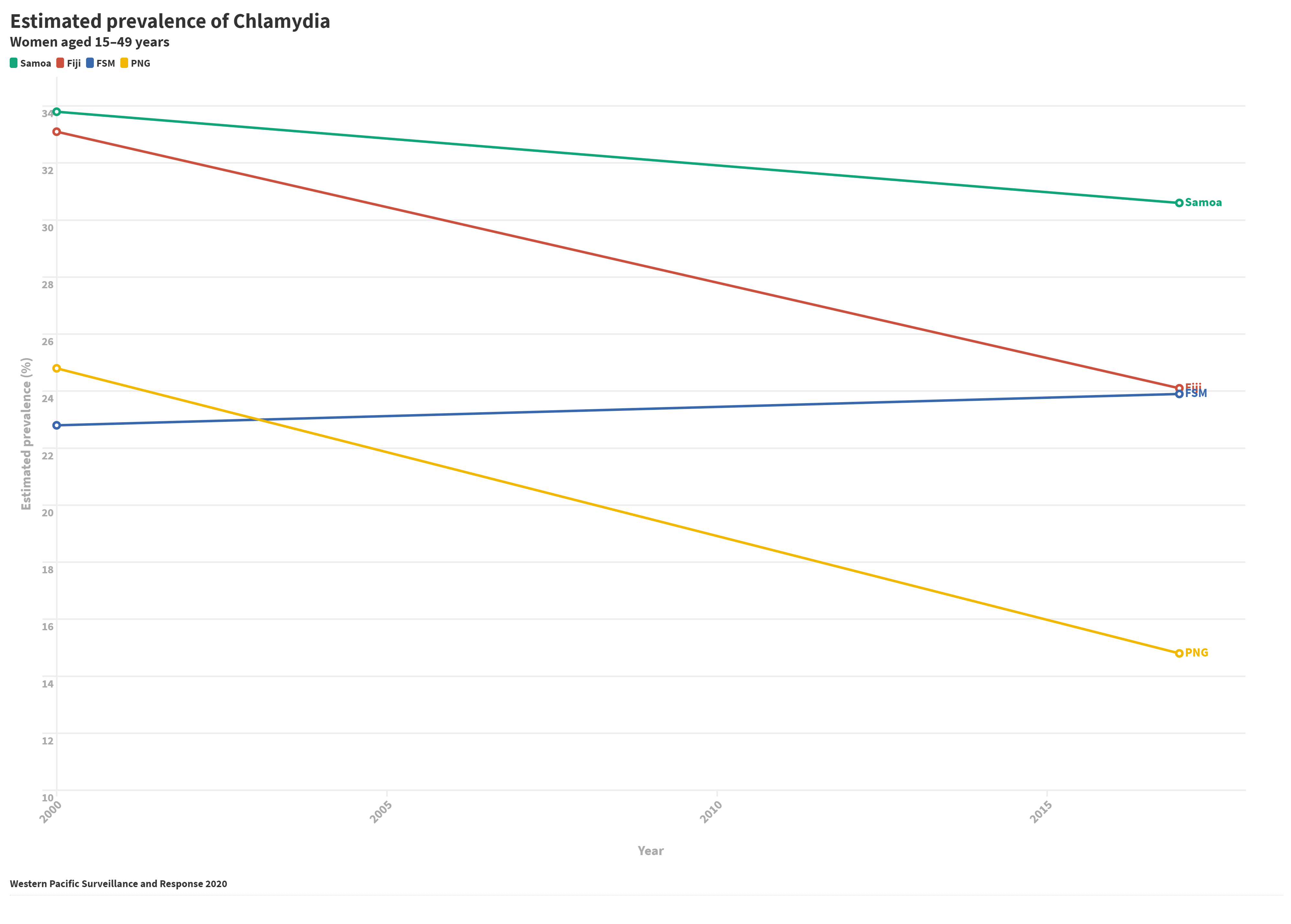 The consequences of untreated S.T.I.s can be life-altering and life-threatening.  Untreated chlamydia can cause pelvic inflammatory disease, infertility and fatal pregnancy.

"We don't really know what the rates are with men so we only make sense that nearly 1 in 3 women of childbearing age has chlamydia, it could be a little less or a bit more but basically what it means is that there is a likelihood of a decrease in fertility and more ectopic pregnancy in women who have chlamydia," she said.

In a comparative table in the report, Samoa was found to have the lowest rates of active syphilis among all nations studied but there was a slight increase in its estimated prevalence over the years (from 0.14 per cent in 2000 to 0.16 per cent in 2017). Rates of gonorrhoea have also fallen slightly to reach 1.6 per cent.

The report notes that Samoa's chlamydia prevalence has not fallen since 2000, which may be due to the low awareness amongst providers and target populations and the lack of an operational strategy for partner tracing.

Although Professor Wolf noted that the difficulty in detecting cases and seeking treatment also stems from attitudes towards seeking sexual health in Samoa.

"It makes it so much more difficult to be able to rid chlamydia amongst single women who are [engaging in sexual activity] with their boyfriend or more than one boyfriend over a long period of time," she said.

"It tends to be throughout the community and young women in particular, and I really think [for] Samoa, it really is time to think [about talking more openly about it]. You're not reducing your rates."

The nation’s chlamydia rates are expected to be a lot higher than projected in the report as only cases among women are reported, the report found.

Data tends to be dominated by women as most cases are detected when women are pregnant and undergo antenatal care.

"We just don't know about them and chlamydia, we do not [have] that data because we only collect it from those who go to the STI clinics and those who go for treatment," she said.

"We only really have data on women, so it's really important to be collecting data on men because [women] don't get chlamydia from the toilet seat, you're only going to get it from a male partner or sexual partner.

"Most want to be able to have babies, whether men or women at some stage in their life, they want children. Children are really important in Samoa, aren't they?"

Due to the estimated high prevalence of S.T.I. in the four countries, the Professor suggested that several areas in their surveillance and treatment needed improvement.

"Clearly, all countries studied here would benefit from implementing periodic prevalence assessments during [antenatal care] and assessments of men and women in the general population.

“Given these countries’ high S.T.I. prevalences, such assessments could be small-scale and yet, with careful site sampling, yield valuable representative data indicative of national time trends."

In women, most gonorrhoea and chlamydia infections are asymptomatic, meaning they do not show symptoms.