The LAVA Hotel will not be serving food to non guests on Sunday. (Photo: Vaitogi A. Matafeo)

The LAVA Hotel will close its doors on Sunday after concerns were raised about their compliance with state of emergency (S.O.E.) restrictions preventing hotels from serving food to non-guests, on Sunday.

LAVA Hotel Limited’s Chairman, Pepe Christian Fruean, declined to respond to questions about the hotel advertising it was open on Sundays catering to'ona'i (sunday lunch) to the public.

On Saturday 20 June 2020, the hotel advertised their Sunday to'ona'i specials; customers were advised to order no later than 5pm. 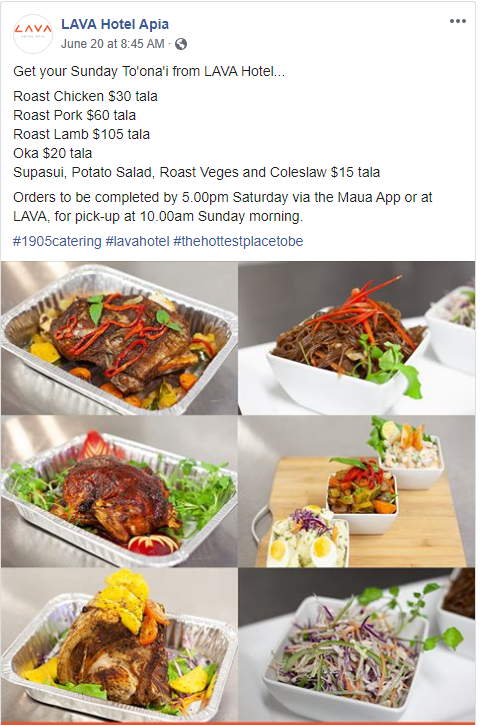 On Friday evening, the LAVA hotel took down their Sunday to'ona'i advertisement on social media and notified customers that they will be closed on Sundays.

"Dear Customers, please be advised that due to the revised S.O.E., LAVA hotel will be [closed] on Sunday," the notice read.

According to the Deputy Police Commissioner, Papali'i Monalisa Tiai, LAVA Hotel was approached by the Police but due to complications, the matter was referred for legal advice.

"We are aware of the issue and approached the hotel in question. It was made known to the officers that some in-house guests had invited families over for lunch [or] toanai. As such the matter was referred for legal advice," she wrote in an email responding to questions from this newspaper.

"Advice was received and share to N.E.O.C. who have also contacted the Chamber of Commerce with regards to this matter and hopefully hotels will now adhere to the arrangement; a) No alcohol is to be served in hotels bars on Sunday; b) Restaurants will be opened to serve in-house guests [only]."

She reiterated that a breach of these arrangements such as allowing outside guests to dine on Sunday in their restaurant will result in Police issuing a state of emergency infringement fine.

"Hotels are allowed to open their restaurants to serve [or] cater [to] their in-house guests only," Papalii said.

LAVA is entirely owned by the mobile phone company Digicel (Samoa) Limited.  Located on Mulinuu Road in Sogi, the hotel opened its doors to the public for the first time just last month. The LAVA Hotel joins Hotel Tanoa Tusitala, Hotel Elisa, Amanaki, Le Sanita Hotel and Hotel Millenia on that side of Sogi.

On Thursday, following advice from the Police and the National Emergency Operation Centre, the Chamber of Commerce had sent out a reminder to all hotels and resorts on their membership list reminding them of Sunday closures.

"Please be reminded that as stated in the State of Emergency orders, All businesses are to be closed on Sunday, except small shops and supermarkets in the restricted opening hours," the Chamber Secretariat wrote.

"N.E.O.C. has informed us that the Ministry of Police, Prisons and Corrections will be emphasising in terms of enforcement (monitoring and issuing of penalties) the following conditions for Hotels and Resorts on coming Sundays: restaurants and Bars in Hotels shall be [closed] to the Public on Sunday; restaurant [only] can be opened to cater for in-house hotel guests only."

Two other hotels contacted by the Samoa Observer on Saturday, Aggie Grey’s in Apia, and the Taumeasina Island Resort said they had not been offering food to customers other than hotel guests.