The Association of the University of the South Pacific Staff has written to the Council in the wake of Vice-Chancellor Professor Pal Ahluwalia’s suspension by the Executive Committee last week.

The Association is calling for transparency in management and fair treatment of University academics and professional staff.

In a letter released on Tuesday, the A.U.S.P.S. union detailed a list of questions to the Council over whether proper practices were followed in the Professor’s suspension and the events that followed.

It requested a copy of any material used to justify Professor Ahluwalia’s suspension, asked whether a quorum of three regional members were present in order to enact the suspension and whether the Pro-Chancellor Winston Thompson, who had a “clear conflict of interest” recused himself from discussions over the Professor.

Last week Mr. Thompson had Professor Ahluwalia suspended over alleged material misconduct, months after the only recently instated Vice Chancellor had revealed rampant misspending by University leadership and resolved to end it. An independent investigation by B.D.O. Auckland confirmed many of the Professor’s allegations.

Citing the universities rules on disciplining a Vice Chancellor, the union asks whether processes around confidentiality were followed correctly, and whether the alleged misconduct was both “material and a breach of Fijian law.

According to the U.S.P. Ordinance, the Pro-Chancellor and the Executive Committee may suspend Professor Ahluwalia during an investigation, but only if “acting reasonably, consider the misconduct to be both material if proven" and if it could result in sanctions being imposed on the Vice-Chancellor.

The union also asks whether the Council has followed the rules on how an investigation should be carried out: that a sub-committee should make its draft report available to the Vice-Chancellor within five days of finishing the investigation, who will then have 15 days to reply.

Only then, with the response considered, the sub-committee should finalise its draft and make recommendations to the Executive Committee within five days of receiving a reply.

“We remind the U.S.P. community that staff, students or management shouldbe treated equally in cases of breaches in policy, procedures and or regulations,” A.U.S.P.S. writes.

“In taking this stand, A.U.S.P.S. is mindful of its mandate and wishes to remind staff and the greater U.S.P. community that we shall need to show respect to the University Council and its member countries, due processes in place, good governance, transparency and the rule of law.

The Vice-Chancellor's ouster has led to protests by students and staff, more than 500 of whom have signed a petition threatening action if he is not reinstated.

The Executive Committee should never have had the powers to suspend the Vice-Chancellor, she added – that is the role of the University Council.

“It is our view that the University Council had determined how it would deal with these issues and the Council asked the Pro-Chancellor and Vice-Chancellor to work together and keep to their own mandates, but it had become very obvious that the Pro-Chancellor is very obstructive,” said Fiame.

She said the clash between the two rests atop a wider problem at the institution – that it has been under Fijian leadership, and based in Fiji for so long that the local administration is fighting back against regionalism.

Fiame has called for a summary of the B.D.O. report to be made public, and said she intends to ask this of the Executive Committee. 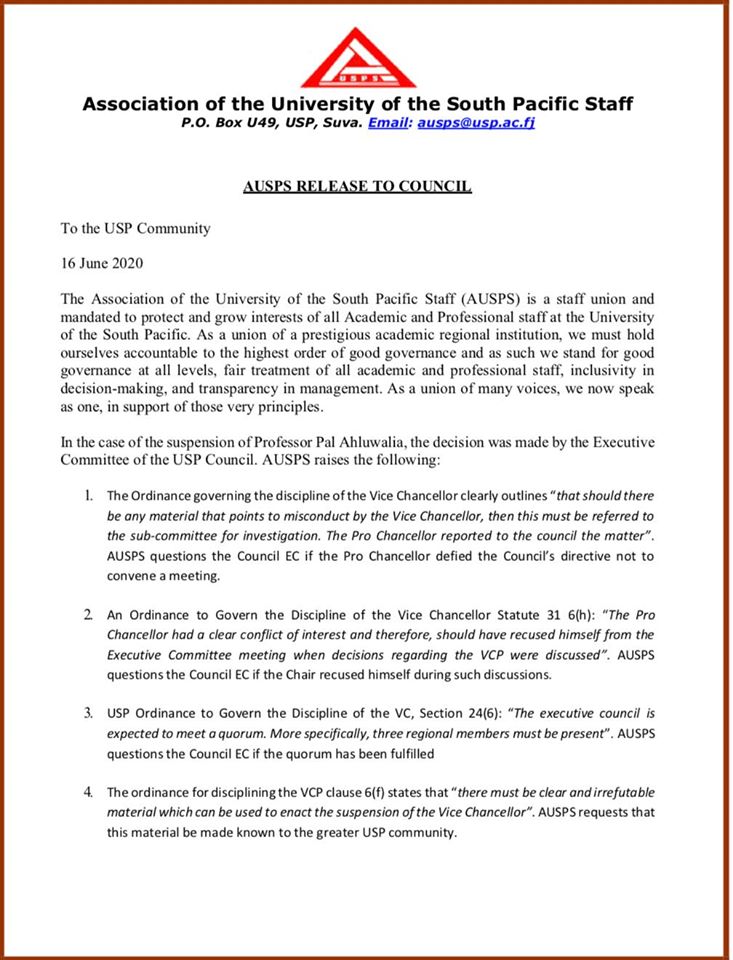 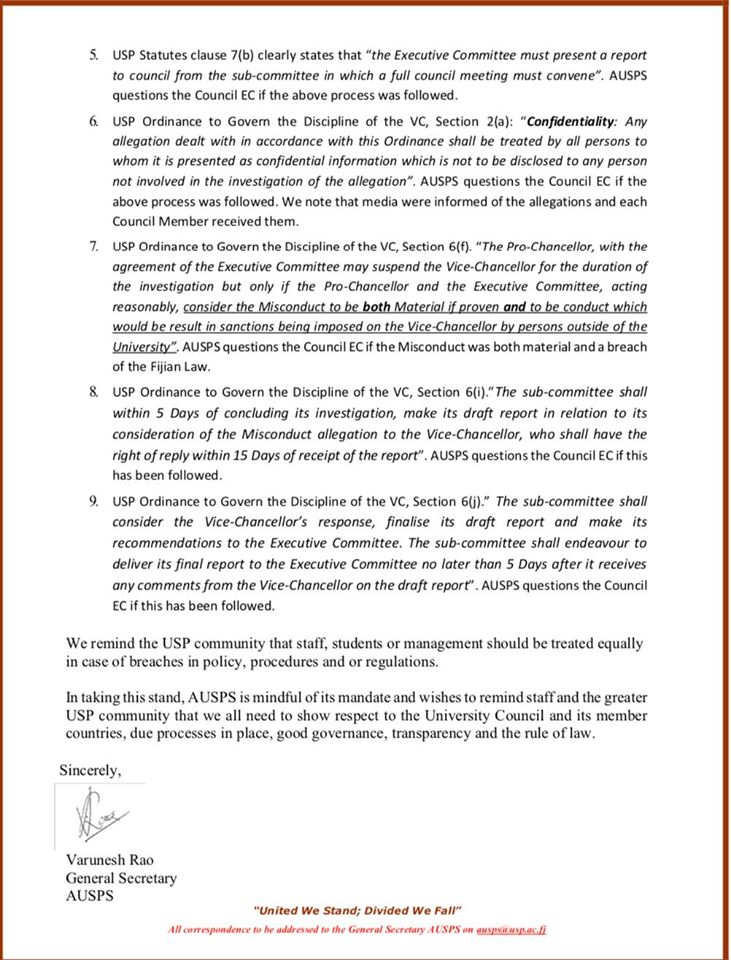