Murals of Samoa’s national bird, the manumea, can be seen in a few places in Upolu and Savaii which is all part of the Save the Manumea campaign.

The murals are the outcome of the training hosted last year by New Zealand based artists, Charles and Janine Williams who shared their knowledge of painting native birds in an accurate and authentic way.

Ielafi Faitua of Faleaseela is an artist who studied art for two years at the Leulumoega School of Fine Arts and has taken part in the creation of four Manumea murals across the country.

Mr. Faitua, art teachers, and M.E.S.C staff had taken part in the three-day training held last year in regards to the art of large scale outdoor painting done by Charles and Janine Williams who painted a “larger-than-life” Manumea on the side of the New Zealand High Commission.

“I have taken part in the creation of four Manumea murals so far. The first one was at Malifa where we worked together with other people who were part of the training,” Mr. Faitua said in an interview with Samoa Observer.

“The next one was the mural at Faleaseela. The one in Salelologa was created after the one in Faleaseela was finished and the one here at Malololelei is the fourth one,” he said. 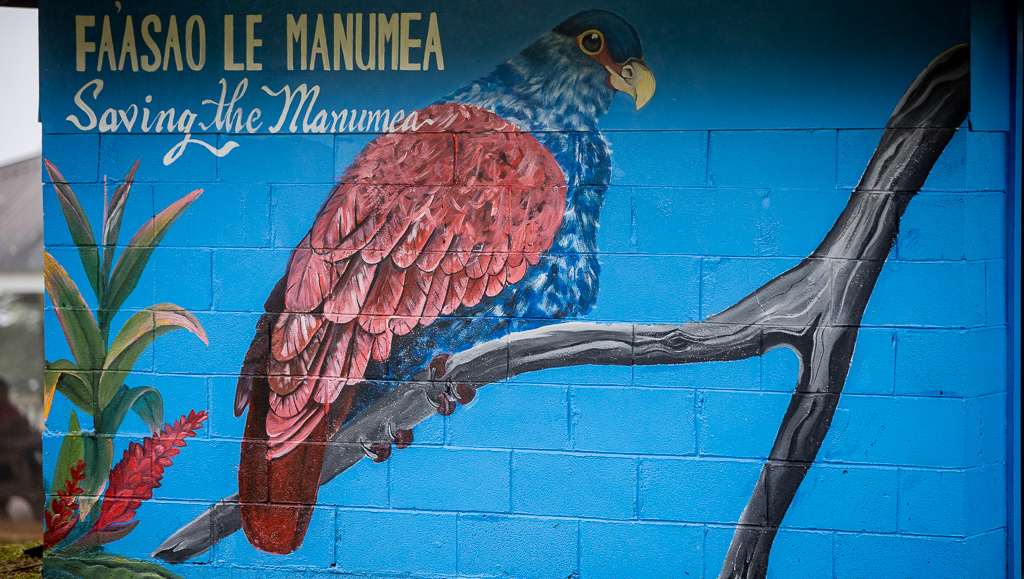 The Manumea mural at Faleaseela was the work of four artists which were Mr. Ielafi Faitua and a few of his brothers.

“I worked on the one found in Savaii together with Jane and a few people that were there to offer their assistance,” he said.

Mr. Faitua gives thanks to everyone they have worked together with. He stated that he has learned a lot of important things for the future and would also like to thank James Atherton and the Samoa Conservation Society for this important programme.

Jane Va’afusuaga of the Save the Manumea Campaign told the Samoa Observer that the training last year of local artists including Mr. Faitua was part of their campaign and they had worked together with the Ministry of Education Sports and Culture (M.E.S.C).

“We had some art teachers from M.E.S.C and we also brought some artists from our local communities, and Charles and Janine conducted a three-day workshop,” she said.

The murals are the outcome of the training hosted last year by Charles and Janine Williams who shared their knowledge of painting native birds in an accurate and authentic way.

The Save the Manumea campaign collaborates with many local artists such as Mr. Faitua and his brothers for the painting of the Manumea murals that can be found at the New Zealand High Commission, Malifa, Faleaseela, Salelologa and Malololelei.