As the power struggle at the University of the South Pacific (U.S.P.) Fiji’s main campus deepens, its local branch is asking for an end to the drama among university leaders.

But more than 500 staff and students have put their name to a petition threatening drastic action including a potential walkout unless the Vice-Chancellor is reinstated;

The university’s local campus today added its voice to a growing chorus of protest against what the President of Nauru described as the “hijacking” of university governance.

The suspension of the Vice-Chancellor came just a week ahead of the Campus’ final exams for the first semester.

The executive acted to dismiss the Vice-Chancellor without consent from the U.S.P. Council, which is made up of the 12 member countries who co-own the University.

The executive committee inludes Mr Thompson, his deputy Aloma Johansson and Chair of the Audit and Risk Committee, Mahmood Khan.

Supporters of Professor Ahluwalia argue he only began to be investigated after raising concerns about serious misconduct involving his predecessor.

“We are trying our best to function as normal as we can under the circumstance. This is the time of the year when we’ve been disturbed with COVISD-19 and the lockdown, so the students are currently on a study break,” said Dr. Veitayaki.

“It’s not really a good time to have this thing over our heads.”

This led to an external audit by accountants New Zealand accountants BDO that revealed millions of dollars in improper salary payments and expenses, and disturbing claims of a “sex-for-grades” scheme that was covered up.

The report names Mr. Thompson, who has since advocated for Professor Ahluwahlia’s dismissal.

Alafua Campus Dr. Veitayaki said the University’s Students Welfare Officer had informed him of students who have expressed concerns on the year-long issue, which continues to unfold.

“[This is sad.] This is the time when we want our students to focus totally on their work and not to have this type of distress, and there is no flight in and out [of Samoa]. Students are definitely feeling more stressed than normal,” he said.

“For our staff, we are working as normal [as possible], we want to maintain the normalcy with what we’re supposed to do and worry about our students as they prepare for exams.

“So it’s not a very good time for this kind of disturbance.”

Since Professor Ahluwalia’s suspension on Monday, he has been replaced by Derreck Armstrong who is acting in the role.

That news was met with a protest from hundreds of students and staff at both the main Suva and regional campuses. 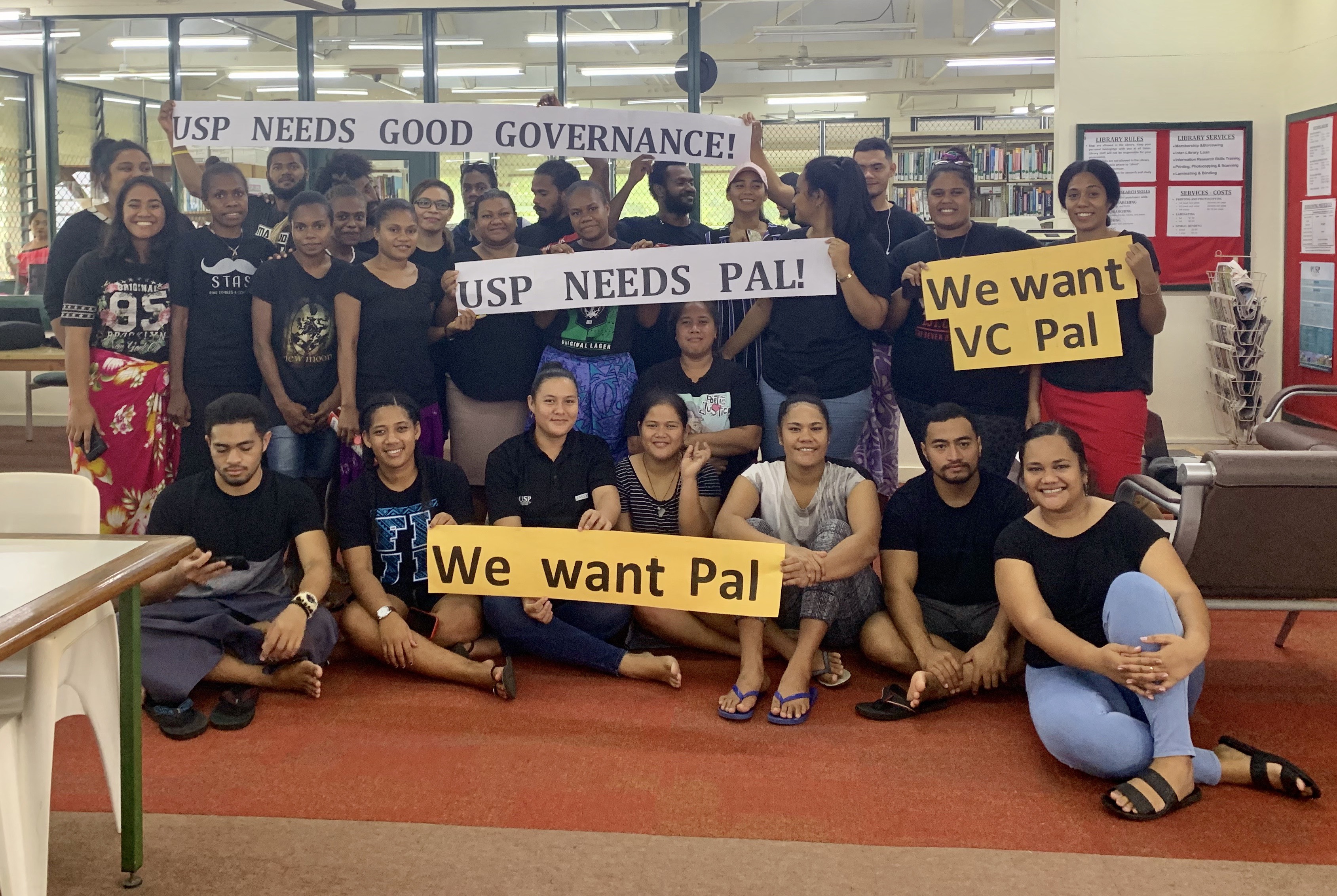 On Thursday, the Alafua campus students and staff wore all black in solidarity with their peers and colleagues on other campuses to show opposition for the suspension of Professor Ahluwalia.

“We are currently in our study break and with what’s been happening, it is toxic,” said Mr. Moses, an international student from Vanuatu.

“We do not recognise the Acting Vice Chancellor and we will wait for the U.S.P. council to meet and resolve this issue as soon as possible.”

A member of the U.S.P. Council, Semi Tukana, expressed his disappointment in a letter to Mr. Thompson for his insistence on pushing on with investigations against his colleague.

"What spurred Mr. Khan to make this surprise move is a mystery. There is no urgency here to warrant a rushed approach to the handling of his complaint as the university is continuing to operate well even under health and economic crisis," he wrote.

"If anything for anything, Professor Pal Ahluwalia should be congratulated for his prudent approach in managing the operations of the University and in keeping it above water and in the black even during the COVID-19 crisis."

Dr. Veitayaki also noted that the commotion in Fiji could be classed as a case where organisations use the chaos of COVID-19 to pursue their own agendas.

“In this day and age our students are studying online and [yet] they cannot have a meeting with Council members online? It is hard to believe,” he said.

“We have an online meeting so often with Laucala [Campus], so why can’t the highest body of the U.S.P. use the same means. It does not make sense.”

The same issue was addressed by the Deputy Prime Minister of Samoa, Fiame Naomi Mata'afa, who said the executive has taken over the powers of the Council under the cover of COVID-19.

Nauru's President, Lionel Aingimea and the incoming chancellor of U.S.P. is calling for an urgent meeting of the full U.S.P. Council.

In a letter to the University’s Council following the suspension of the Vice Chancellor, Aingimea wrote that the "future of our regional Pacific University is now seriously in jeopardy," and that the full Council must meet urgently to "reverse this illegitimate decision."

The Australian Minister for Foreign Affairs, Senator Marise Payne issued a statement on the issue at the U.S.P. saying they are concerned about leadership issues.

"We have called for a special meeting of the USP Council.  It is important to find an acceptable solution for all Pacific countries, that is in the best interests of the university and education in the region," she said.

The Samoa Meteorological Service is preparing for the cyclone season with a regional meeting of more than 130 meteorologists and scientists.