Disability volunteer recognised by the Queen

Fa'aolo Utumapu was awarded one of the Queen's Points of Light awards. (Photo: Francis Faalili)

A Samoan woman, who is a volunteer in the disability sector, Fa'aolo Utumapu-Utailesolo, has received an award from the Head of the Commonwealth, Queen Elizabeth II, in recognition of her work.

The award is the Commonwealth’s 132nd Points of Lights Award initiated by the Queen, to properly acknowledge and celebrate people from all over the Commonwealth countries, who worked to promote the wellbeing and improvements of their communities through their own voluntary work.

Mrs. Utailesolo, who is also blind, told the Samoa Observer in an interview of her experience working with other volunteers since the disability movement began in Samoa in 2001.

“There was no office and funding and no nothing but what pushed us to do it is because we felt that for so long, people without disabilities have been running the show,” she said.

“They make all the decisions about us, like what they think is best for us is what’s best for us. So we thought that we should be the ones who make the decisions on the things that should be improved. That's why we set up the Nuanua o le Alofa to make our own decisions.”

According to Mrs. Utailesolo, the disability movement faced many challenges back then as people did not accept them and assumed that those with a disability could not do anything.

“It’s hard for people to accept, and they still think of us at that time that we’re disabled and we’re sick that we can’t do it and that we lack the abilities to do these things,” she added. 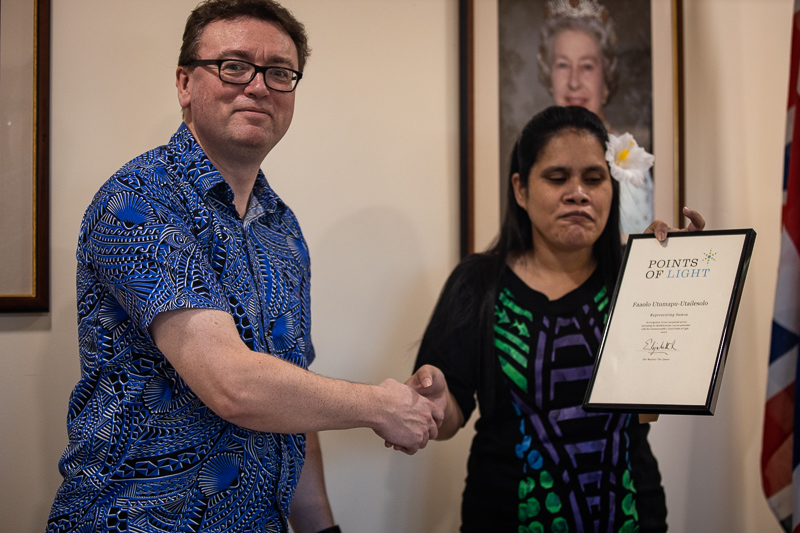 But everything changed after the establishment of the Nuanua O Le Alofa (N.O.L.A), which has become the voice for those living with a disability.

Going back to her award, Mrs. Utailesolo said she was humbled at being Samoa’s recipient of the award.

Mr. Ward said he was elated that Mrs. Utailesolo was a recipient and it was his first time to present the award in Samoa.

“I think it’s one week since then who have given significant and outstanding contribution to the development of their community and today we are here to pass on this recognition from the Queen to Faaolo Utumapu, signed by Your Majesty the Queen, in recognition of her exceptional service advocating for disabled people.”