A European missionary couple have taken it upon themselves to clean a block of land in Vaitele-tai that has become a public eyesore in recent years due to reckless littering.

Angelica and Stephen Merrit, who are both missionaries of the Pentecost Church of Samoa, worked for three days this week to clean a privately-owned block of land between the Frankie's Hypermart and the Farmer Joe supermarket.

The couple were sighted by the Samoa Observer cleaning the area on Wednesday, assisted by two Samoan youngsters.

They told this newspaper that they saw an article in the Samoa Observer a fortnight ago, which exposed the level of littering and the don’t-care attitude of the public, and were concerned about the issue.

Mr. Merrit urged Samoans to respect their land and not litter as they live in one of the Pacific’s most beautiful islands.

“Respect your lands. Ownership, that’s what’s stuck in my head. This is your country, your village, you live in one of the most beautiful islands in the Pacific and if you feel this to be your home, pick up trash,” he told the Samoa Observer.

“We shop at Frankies and Farmer Joe and we saw and realized how much rubbish there was so we just decided that we’ll do something about it.”

Working for three hours a day from Monday to Wednesday this week, the couple was able to get the block of land cleaned, using rakes as well as trash bags and with the help of young locals who happened to be around that time.

Mr Merrit said cleaning that block of land was driven by his passion and heart for Samoa, as he first travelled to the country when he was 15 years of age, and had a soft spot for the nation.

“I was here when I was 15 and I’ve always had a connection to Samoa so we’ve got a four year visa and we’re trying to make a difference in the bible school but also in the community,” he said. “I’ve been involved with Samoa doing missionary work for about six years just in and out doing some work in New Zealand and Tonga but my heart was always in Samoa.” 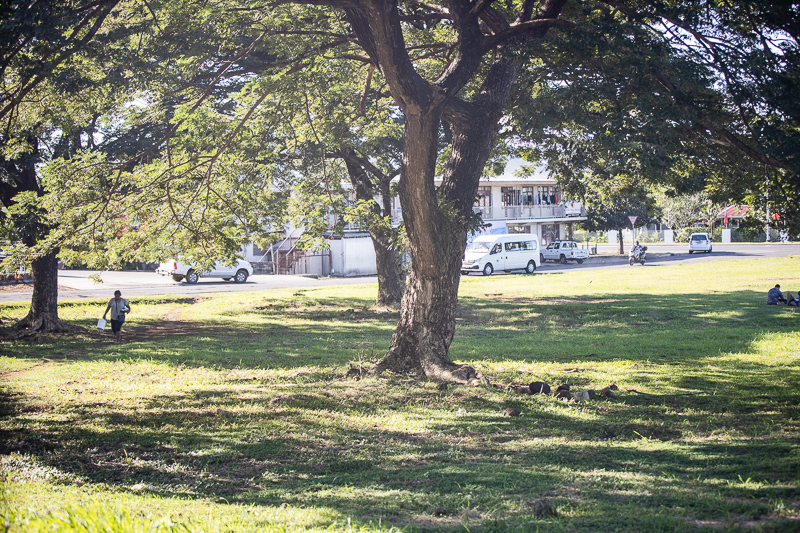 Hoping that their three-day work will have a positive impact on locals and highlight the issue of proper waste management policies, Mrs Merit said the signs are encouraging.

She said the Samoan youngsters who assisted them were given food and asked to dispose of their rubbish properly.

“We gave them food yesterday and we told them to put their rubbish in the bins and we came today and there was no trash so it was encouraging,” she added.

And coming from a community in Europe where fines can be as high $10,000 for dumping rubbish, the couple hopes local authorities legislate to address littering.