The protest movement came as a result of the death of African American George Floyd, who died after a white police officer knelt on the back of his neck last month in Minneapolis.

Rev. Thompson and his Faletua are graduates of the C.C.C.A.S. Kanana Fou Theological Seminary and lead the Dominguez Samoan Church in Los Angeles, California.

Responding to questions from the Samoa Observer, Rev. Thompson said George Floyd died violently after he was tortured by a police officer.

“He was tortured by a police officer. If you watch the final moments of his life, you can see the malicious look in the officer’s eyes as he plunged his knee deeper into Floyd’s neck each time Floyd screamed ‘I can’t breathe’. In a final call for mercy, Floyd called out, ‘Mama’, one last time as he slowly slipped away into unconsciousness and eventually death,” Rev. Thompson said. 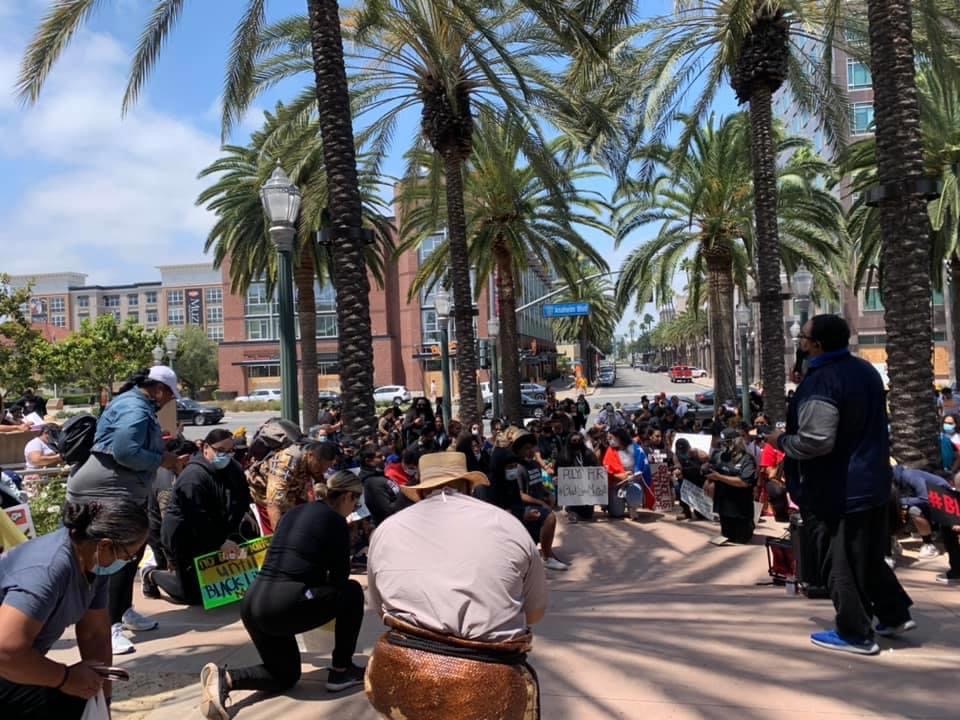 “I feel angry as a human being, a father, a husband, Samoan, American, and as a faifeau. I am angry that someone who is sworn to protect the public clearly has racial bias in carrying out his duties. That’s not good police work, that’s domestic terrorism hiding behind a badge and the law. Yes, there are good cops, but there are plenty of bad cops that good cops make excuses for. That’s irresponsible and weak. But it’s also the way American law enforcement consistently covers up these murders that has led to the current social crisis.”

White supremacy, according to Rev. Thompson, is a “deeper sickness” in America and added that Samoans are also guilty of “lifting up white privilege.”

He said it is not hard to recognise white privilege and racism going hand in hand, and there are strands of it in Samoa.

“It’s not hard to recognize white privilege and racism–if you’re looking for it. If you look close enough, you see strands of it in Samoa. And sometimes, we encourage it. I was once at a market in American Samoa. I stood in line and the woman behind the counter was extremely rude and cold for no reason. As soon as I was done, a white couple behind me was greeted with so much hospitality and warmth,” he said.

But Rev. Thompson said he doesn't blame the worker behind the counter and Samoans know what is racism.

“But I don’t blame the young lady behind the counter. Those are just some of the ways we lift up white privilege in our islands that have been passed down to us. I think times are different today. Samoan people understand racism. We understand how it works, and who benefits from it. The younger generations of Samoans are teaching us. But the question is: are we listening?”

The couple and one of their church youth member, Letonu Tenari, participated in a ‘Black Lives Matter’ two-mile march to Anaheim City Hall and protested on Thursday, 4 June in Anaheim, California. Tenari’s parents Le’aula and Elisa Tenari are from Palauli and Papasataua, Savai’i.

The protest was organized in two days by Pacific Islander seminary students and clergy. 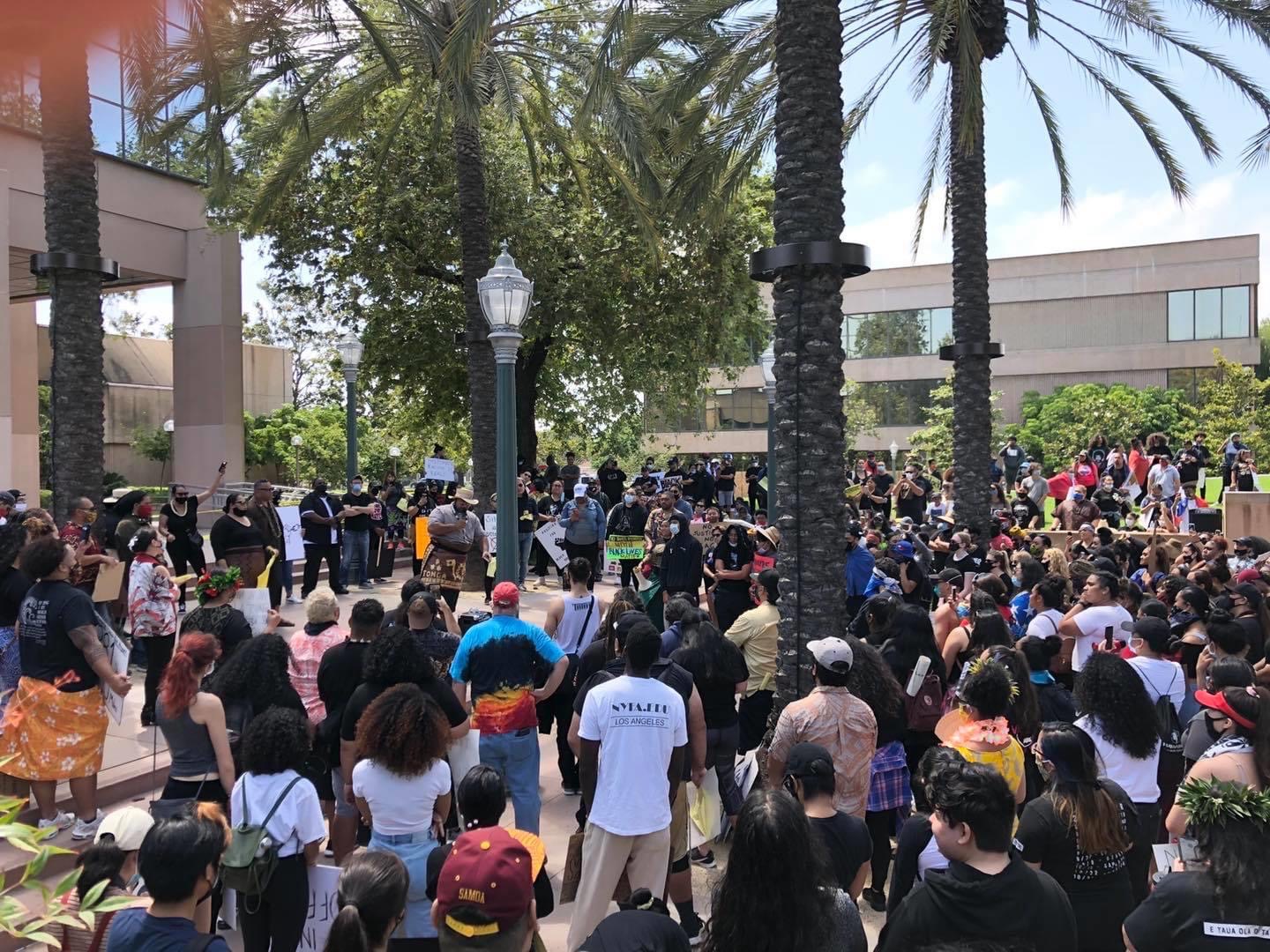 “This was a collaborative effort between mainly the Samoan and Tongan community in Southern California. A friend and colleague by the name of Ainise ’Isama’u reached out to me and other community members and clergy,” said Rev. Thompson.

“The procession of the march was approximately two miles, and it ended in front of the Anaheim City Hall where pastors, community leaders, and young people ranging from 13-18 years of age gave moving testimony and voiced their solidarity with the Black Lives Matter movement,” Rev. Thompson said. “It was a powerful show of solidarity that was peaceful. Yet vocally, there were various moments of frustration and rage on behalf of all Pasifika people residing in America concerning, not only the treatment of Black people, but all communities of color in America–Pasifika included.”

The crowd, he described, began steadily at about 200-250 people “but it began to grow immensely as we marched on the streets.”

“Many Pasifika people who noticed the march while passing by on the road parked their cars and joined the procession leading up to Anaheim City Hall. As the march came to a full stop at City Hall, approximately 500-600 people were in attendance.”

It was not the first time Rev. Thompson has stood in solidarity with marginalised people and he participated last Thursday because he wants to ensure love and justice wins.

“In truth, this is not the first time I have stood in solidarity with marginalised people. Yet I participated in Thursday’s march because I want to do all that I can while on this earth to ensure that love and justice prevail. I am a Samoan Faifeau with a platform, and I must decide what that means in relation to my neighbors. Who are black people? They are my brother and sister, they are my neighbors,” he said. “If they are oppressed and suffering, I feel it just like I feel it deep in my soul when the sons and daughters of Samoa experience pain. Traditionally, it’s not expected for Samoans or faifeaus to participate in movements for social change outside of their own community. I don’t agree with that at all. In fact, I outright reject that type of thinking. It diminishes us as a people. It portrays us as selfish and non-educated. All things not true. The problem in the world is that we don’t get involved enough with the suffering of others.”