Samoan teacher honoured by the Queen

A Samoan educator, Afamasaga  Agnes Rasmussen, has been honoured with a Queen’s Service Medal for 52 years of service to education and the Pacific community.

From 1985 to 1995, she served 10 years on the Samoan Catholic Schools’ Sunday School Core Team in New Zealand.

Her award was announced on 1 June. She was, among 180 individuals to be recognised with Queen’s Birthday honours, according to New Zealand’s Department of Prime Minister and Cabinet on its website.

Afamasaga initially wanted to enter the field of accounting but in the early 1960s, the New Zealand scholarship panel didn’t allow women to pursue that area of study.

“There were only two choices offered – nursing or teaching. I didn’t like either. I told the panel I wanted to be an accountant and the reply was: accounting was only for the boys. Wow, how discriminatory, I thought. So reluctantly, I chose teaching,” she told the Samoa Observer. 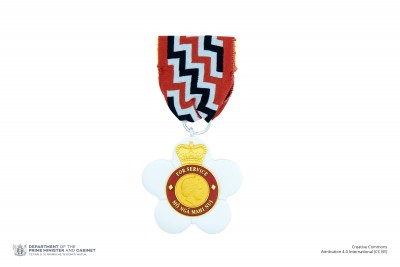 She thanked her late mother and teacher, Sister Emerentiana, who were both at her scholarship interview and believed that she could take up the challenge.

“I had a firm plan to find employment in Samoa after college, so I could be close to Mama and look after her. At the scholarship interview, I begged her not to send me away but she signed the necessary documents," she said.

“Fifty-two years later, I am still with teaching and a very successful educator.[…] above all, thank you Lord for being with me throughout this long, successful life journey as a teacher.”

In 1996, she entered New Zealand politics and ran for office with the newly formed political party, the Advanced New Zealand Party.

She was not elected.

“So [my husband and I] eventuated a plan to return to Samoa and look after both our elderly mums,” she said.

Afamasaga’s 52-year career in teaching began in 1964 with a New Zealand Government Scholarship for Teacher Training. She trained at Ardmore Teachers’ College in Papakura and did a practicum year with Henderson North Primary Auckland in 1967.

In 1968-1970, Afamasaga taught at Leifiifi Intermediate School under Principal Dick Bishop.  From 1971-1975, she taught Apia Primary School with Principal Lisi Vaai and then returned to New Zealand and became a relief teacher at Jean Batten Primary and Kingsford Primary in South Auckland.

Afamasaga taught at Nga Tapuwae College Mangere from 1978 to 1986.

In late 1986 she was appointed as Senior Woman at Tangaroa College. In 1978, she became a lifetime member of PACIFICA: a national group for women and girls. Afamasaga served on the post-primary Teacher’s Association multi-cultural Education Advisory Committee from 1984-1985.

“My legacies are with my children, family and communities in New Zealand and Samoa and with the numerous students who I taught for 18 years, between Nga Tapuwae and Tangaroa College who, in their own way, acknowledged with sincere gratitude many teachers of these two colleges,” she said.

“This award, this honour is for you all…continue to shine in whatever you do…those who I still currently teach as a reliever, and/or sometimes short term permanent teaching roles, this goes to you all as well as for a successful future.”

In 1987, Afamasaga was selected for the Hillary Commission Women’s Task Force for Recreation and Sports. She was appointed by New Zealand’s Minister of Welfare, Michael Cullen, for a three-year term on the commission but served six years. She was the first Pacific Island woman appointed to the commission.

She was later appointed to the De La Salle College Board of Trustees in 1988 and sat on the board for nine years.

Afamasaga was appointed Deputy Principal of Tangaroa College in 1989 and served in that role from 1993-1995.

Afamasaga still teaches but as a relief teacher at St. Mary McKillop Catholic School in Mangere.

She was elected as secretary of the Samoan Catholic Finance Committee in 1990. The committee was instrumental in the construction of the Malaeola Centre, home of the Auckland Catholic Diocese Samoan Catholic Community Chaplaincy.

“I thank sincerely my late maternal grandparents, Velia and Toleafoa Paaniani, and my extended […] family at Lepea, my paternal grandmother Sauiafa Launiuvao Strickland and Torea Strickland Ngatangi’ia Rarotonga and my extended Strickland family, Lotofaga, my darling parents Akaka (Agatha) and Louis Strickland, my brothers and sisters, my own dearest immediate family Paul, our four children, their spouses and our precious grandchildren,” she said.

“Continue to shine in all the good pursuits you are chasing in life. God bless you all.”

Afamasaga previously worked as a proofreader for the Samoa Observer.