A farmer in a 58th Independence video from the Samoa Tourism Authority.. (Photo: Screen Capture)
TM
By Tina Mata'afa-Tufele, 02/06/2020

Individuals, companies and nonprofits held competitions and special events as well as published special Independence wishes in compliance with state of emergency (S.O.E.) restrictions that limited public gatherings to five.

“Radio Polynesia and TV3 are encouraging you to live here in Samoa or if you are overseas! If you have a phone, video record your flag raising and send it to us at TV3 so we can show it on our Monday 1 June program,” TV3 said in a statement.

The station issued their invitation to participate last week.

“These little bubs are all ready for independence. It's a little different this year but we are hopeful as we look at these future stars of Samoa,” TV3 wrote. 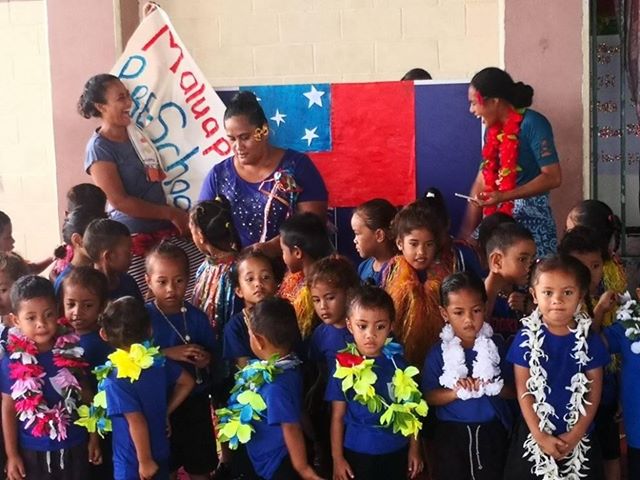 “God Bless you little ones and we wish you all the best in your futures. Thank you to the wonderful teaching staff who sent these in! We live on our grandchildren's land...practice love as we turn 58…[the] world is your oyster!”

Early Monday morning, the legendary woman skipper Vaimasenuu, Zita Martel, who dominated longboat racing (fautasi) in both Samoa and American Samoa, published a post on Facebook, declaring her sovereignty as “a freedom child.”

“I am a freedom child, and I am eternally grateful to our freedom warriors who fought valiantly for the freedom I enjoy today as a Samoan citizen,” she wrote.

“Wishing all our Samoan families and friends here and far, a beautiful day filled with love, kindness, and courage as we celebrate 58 years of Peace and Independence. May we always remember and not take for granted our freedom.”

Photos of her championship crew from Don Bosco and champion longboats the Segavao I and Segavao II from fautasi races of 2008 and 2012, accompanied her Independence Day post.

The Samoa Tourism Authority (S.T.A.) also hosted an Independence Day Photo Competition. The tourism sector has been negatively impacted by the closure of Samoa’s borders and they are informing their Facebook followers that “beautiful will always be here.”

In a special Independence post, they showed a video of Samoans, children and adults alike, all waving the Samoa flag.

“Today, Samoa celebrates its 58 years of Independence. Although we are apart, we celebrate together. Happy Independence Day,” said the STA in a 1 June post.

Businesses across Samoa joined in the Independence Day virtual celebration.

“Our great-great grandfather Timu Laufa, great grand uncle Timu Kolio represented Gagaifomauga #1 in pre-Independence days. We are grateful to Samoa's forefathers and all who made today possible,” the company said in a post on its Facebook page.

“Since then, late grandfather Leaupepe Pita served from Aana #1 and our dad the late Faasootauloa Sam Saili served 18 years through Gaga'emauga #2. We are grateful for their example and we continue to instil the values of ‘tautua’ in all we do. Happy 58th Independence Celebration Samoa.”

Skyeye’s Agnes Saili Kerslake also wrote on her personal account that in Samoa we are “free to worship our Triune God, free to run for office (if it's your cup of tea), free to own land (if you work hard enough).”

“The liberties afforded to us by our ancestors,” she said.