The collision involved a taxi from the Feiloaimauso Taxi Stand and a grey-colored privately-owned Toyota Corolla.

The unidentified driver of the Toyota Corolla had an old woman as his passenger.

Vaoesea Fidow, the wife of a taxi driver from the Feiloaimauso Taxi Stand in Apia whose vehicle was involved in the accident, said everyone was taken to the Moto'otua hospital to be checked.

"For accidents like these, we always have to look at the lives of those involved and I'm glad that everyone is safe as I keep checking the hospital," she said.

The Police were at the scene of the collision. Attempts by the Samoa Observer to get comments from them were unsuccessful.

According to Mrs. Fidow, the taxi collided with a grey-colored Toyota Corolla which was coming from town. The collusion occurred when the taxi made a right turn next to the fish market at Vaigaga. 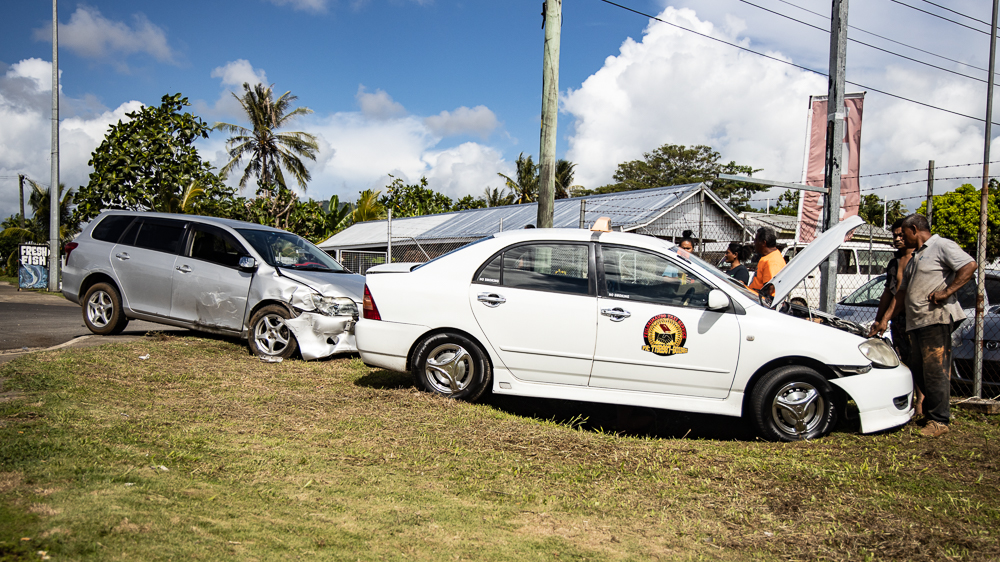 And both vehicles were flung by the impact of the collision towards Pasefika Motors, only to be stopped by a metal pole next to the road and in front of a car dealer, thus preventing any damage to the parked new cars.

A Vaigaga resident who witnessed the incident, Toloa Aniseko, told the Samoa Observer that the Toyota Corolla was allegedly speeding and the taxi should have also given way.

"I know the taxi should've given way to whatever vehicle that was coming from town but the grey car should've stopped to prevent such a crash," he added.

Mrs. Fidow said investigations will be conducted by the Police after the medical checks at the national hospital are concluded.