Now 82-years-old, the former Member of Parliament for Safotulafai and the first Samoan Government Printer, Asi said the previous colonial powers of Samoa were not good for his nation, and it needed to stand on its own two feet.

Asi was fresh out of high school and on his way to study engineering in New Zealand when Samoa’s road to independence intersected with his life.

It was 1955 when, having graduated Samoa College and earned a scholarship for university in New Zealand, Asi was told that instead of engineering, he and three others were being deployed to Wellington to study printing, much to the young man’s dismay.

“On our way to New Zealand the wheels of independence were revolving and the United Nations told Samoa that Samoa will become independent in 1961 or 62,” he recalled in an interview with the Samoa Observer.

“But one of the things you must have is a printing office to print all the papers for the Fono (Parliament).

“We were told to go immediately to Wellington, and I didn’t like it one bit. I came here to do science, I do not know printing, I do not want to be a printer and that is it,” he said.

But young Asi was not given a choice. His mother, Jane Therese Stowers Fruean, did not accept his misgivings and told him to quickly forget his scientific passions and throw himself into his new task. And that he did.

“I wasn’t too happy but I went and did the thing and I worked very hard,” he said.

In 1959, Samoa summoned him and his peers - Leali’ie’e Rudy Ott, Jack Meredith and Ronni Dunn – back home to get the Government printing presses up and running.

Accompanying them was Vic Wilson, an experienced Government printer from New Zealand who stayed with them until the mid-1960’s when Asi took over as head of the department.

It was a busy time. Every single document, discussion and standing order in Parliament had to be printed and signed by the Head of State, and it was Asi and his team’s responsibility to ensure they were correct and delivered on time.

And when whispers of dissent on independence reached the United Nations in 1960, the printing team worked day and night to print thousands of voting papers for a national plebiscite on whether Samoa should split from its colonial rulers. The majority vote of course, was yes.

Nearly a decade later, Asi was sitting outside in his village one day, when an older matai, 96-year-old Letufuga Pa’o turned to him, and told him his generation were lucky to live in an Independent Samoa.

“When he was a young man, a gunship used to come and stay off the coast of Safotulafai and used to shoot into the villages, killing people.

“They had to organise beach watches, climbing up on coconut trees to see, and once they see them everyone would rush into the mountains to hide. They had put the old and sick people behind rocks.

“I didn’t know that. Both the Germans and the Kiwis […] used to think we were target practice. Our village got shot up all the time.”

On Independence Day in 1962, he stood with his family watching the Samoan flag go up, and sang the national anthem alongside his nation.

His grandfather, Henry Stowers, had three brothers sent to wars fighting for Queen and Country. So for his parents, independence meant peace had come to Samoa.

For himself and his peers, the mood was jubilant.

“We were just happy to be running our own show. The only thing we wanted was to reduce the cost of living.”

A few years into his work as Deputy Government Printer, the Government of the day sent him on his second scholarship, this time to the University of New South Wales to study graphic design, industrial estimated costing and supervision. 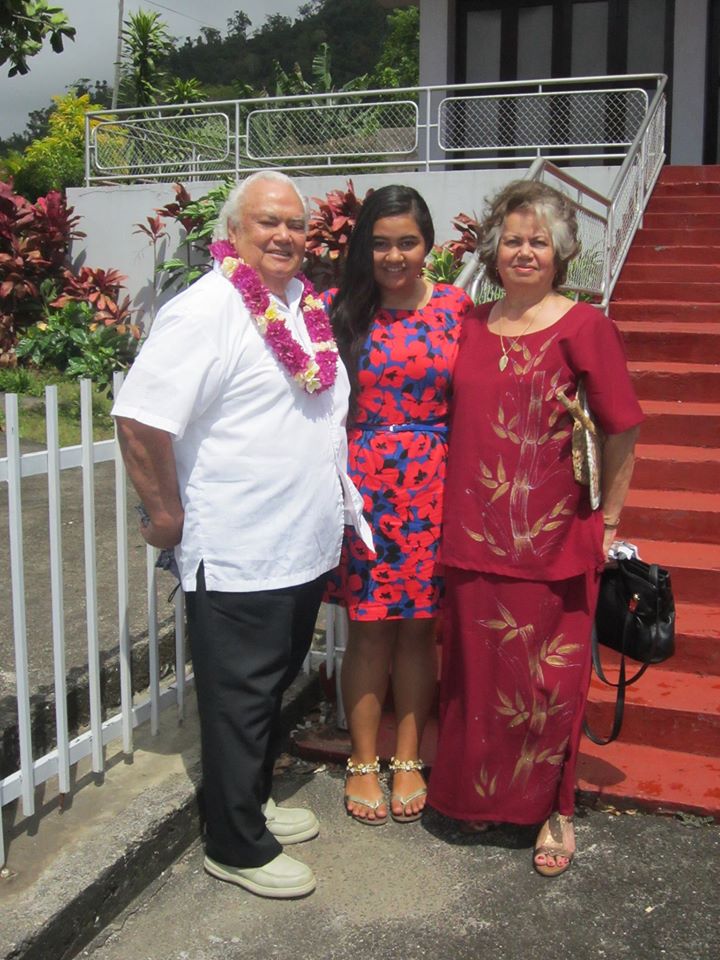 His girlfriend, Mary, headed home from America, the two were married and moved to Australia where they lived for two years.

When they came back and the young printer was promoted to head of the department to take over from the New Zealander Mr. Wilson, he was quickly disappointed to learn he would only be receiving half of his palagi predecessor’s salary.

In the coming years, he would join the thousands of protestors in 1966 demanding better working and living conditions as the Government of the day hiked up the cost of living.

Caught in photographs at the front of the protests in Mulinuu, Asi found himself summoned to the Chairman of the Public Service Commission office for a talking to.

“Have you read the Constitution, Mr. Commissioner?” he asked at the time.

“The Constitution allows me to protest as long as it is without arms, and I have done that. I applied for leave on that particular day and I followed the rules.”

It was hardly the first time Asi was consumed with the issue of fairness. He told the Samoa Observer even his first day at school was a frustrating battle with inequality.

At the time, palagi children were admitted into school at age five, while Samoan children were asked to wait until five and a half. With no way around it, Asi – a January child – ended up aged six and a half before his first classes.

“That is how things in Samoa were,” he said.

After his discussion with the Chairman, the office of the Prime Minister rang to see Asi.

But Fiame Mata'afa Faumuina Mulinu'u II wanted to ask Asi about the strike, not berate him for attending. The two discussed the increased tariffs and fees, and the burden on the cost of living.

Eventually Asi’s role in the protests led to rumours that his days in the public service were numbered. He left and turned to business, buying the Samoa Printing and Publishing Company with Leali’ie’e Rudy Ott, from Eugene Paul, a former politician himself and the first Leader of Government Business at the preparations for Independence.

“I was happy doing my business with Ott, but in our second year he said as much as he doesn’t want to he has to leave, he has seen the future is in heavy earth moving equipment.

“So Rudy left to do his business and I stayed back in the printing office. We grew it to 35 employees with brand new machines and I was happy.

“Then S.C.O.P.A. came along as said you are the only person that is not a matai, and you are the president! So I asked my family at Safotulafai and had the title Asi bestowed on me.”

Not long after, he found himself being asked if he was ready to be the faipule of Safotulafai, to which he said “like hell, I don’t want to be a faipule – I am a businessman!”

But two weeks later his village chief and the Member of Parliament in Safotulafai Leilua Iuliano asked him to stand for the next election and take his place.

He told Asi that he was starting to lose his eyesight and that he needs someone with guts in his Parliament seat. The election came, and he won in 1973

Despite his hesitation, it was not long before Asi realised the good he could do in Parliament. One of his first acts was to revive the dormant tradition of Question Time, held after prayers on Thursday mornings, to put one question to the Minister of Education Alfonso Phillip.

“So on the morning on Thursday after prayers, they said the Faipule from Safotulafai wants to ask a question.”

Some debate ensued. The Minister of Education called for recess to establish whether the law did in fact discriminate between children as to when they started school, and then told Asi that the law would be changed “when we want to change it,” according to Asi.

“We had a few words and the Speaker was not used to this kind of thing so he asked me can I leave the Chamber.

“I was sitting outside with a kava bowl with a few mates, next thing I know someone is touching me on the back and it’s Mata’afa. He came down and said you know, your dad and I were friends (Asi’s father was Sinbad John Fruean).

“I never knew there was this disparity. We have to do something, I will tell Cabinet.

“And that is how they changed the laws so that all the students in Samoa can get in at five instead of what was on the law books.”

In 1976 Asi was appointed Minister of Economic Affairs, Tourism and Civil Aviation, and remained a cabinet minister until he and his family moved to New Zealand and settling in Auckland in 1998.

Health and Finance Ministers from around the Asia Pacific have joined forces to endorse a future in which sustainable universal healthcare is a reality.