The life of one of the founding members of the Human Rights Protection Party (H.R.P.P) and a former Speaker of Parliament, Leota Leuluaiali’i Ituau Ale, was celebrated yesterday.

Leota, who died two weeks ago, was granted a state funeral before he was laid to rest at Solosolo.

The Head of State, His Highness Tui Atua Tupua Tamasese Efi, Prime Minister Tuilaepa Sa’ilele Malielegaoi were among the mourners.

His final service was held at Solosolo Catholic church where his body was carried by Police officers while villagers stood on the side of the road to pay their last respects to one of their high chiefs.

The former M.P for Anoama’a West needs no introduction to the thousands of people who know him. For many of them, they simply remember him as the man with a big smile.

Prime Minister Tuilaepa paid tribute to Leota, hailing a successful political career that spanned 31 years. While many M.Ps would only last for one term, Leota was the exception.

“He loved to talk to people no matter who they are,” Tuilaepa recalled. “Even when you are angry at him for something, the moment you meet with Leota and start talking, you forget all about it, you just laugh at his jokes.”

During a conversation with a Catholic priest, Tuilaepa said they talked about Leota being very talented and someone who always puts Solosolo first. During March General Election, Leota ran against the current M.P., Fonotoe Pierre Lauofo, and lost.

Tuilaepa recalled that Leota visited his office after he lost the election.

“Every other candidate they would be sad but Leota he was happy,” he said.

“He told me he’s happy that he had lots of votes which means that it was not important to him that he wins the election rather what was more important to him was winning more votes from his villagers.”

Before Leota passed away, asked the Prime Minister if his village could perform in the upcoming Independence celebration. Tuilaepa responded to him that there are plenty of days.

He remembered that in 1979, Leota was elected as Deputy Leader of the Human Rights Protection Party while Va’ai Kolone was the Leader.

Tuilaepa said Leota did not want second place and as a result, he resigned from the party and supported the government that was led by Tupuola Efi.

The former Speaker is remembered for some of the historical changes in Parliament that he contributed tp. One of them is amending the term in Parliament from three years to five.

According to Tuilaepa, in order for the amendment to be passed, the government needed two third majority. Leota had the “foresight and wisdom” and went against the Opposition by voting for the change.

Tuilaepa also acknowledged Leota for supporting a motion he made in 1981 when he first entered Parliament. The motion was to allow Tuilaepa to deliver his maiden speech in Parliament when he won the by-election to be done without a timeframe to finish it.

He said Leota was the first to support the motion.

Leota’s wife, Taulapapa Wilma O’killy Ale nee Wornell shared many fond memories of her husband. She said he was someone who never turns anyone away if they asked for help. “Even when he’s about to lie down to rest and someone approaches home at night, he gets up and takes them in,” she said.

Taulapapa also remembered that just after the general election a lot of youths from the village came to Leota for assistance in filling in their forms for the New Zealand quota.

“When they left, I said to Leota you know none of them voted for you in the election because they know we don’t have any money to give them.

“His response was ‘don’t be like that they are looking for help but don’t use those weak things to stop us from helping them.The election is over now and all we can do is pray that they will succeed’.”

Taulapapa also spoke about the pain they had to endure when they went through trouble with the village. She remembered how their house was stoned and burnt but Leota was not bitter about it.

“He told me that was my problem that I say my rosary but I don’t have faith,” she said.

“For eight years (that we were banished) we went through a lot of pain but he kept saying to forgive them and be patient. So I said to him you might as well go and be a pastor.”

Leota went to Toamua Primary School and later attended Samoa College. He went on to study at Whangarei Boys High School, Auckland University and the University of South Pacific.

His career life started from the Prime Minister’s office where he was a foreign officer.

Leota was also the Private Secretary to Prime Minister Mata’afa and Tupua Tamasese.

In the Judiciary sector, he was the senior interpreter and translator at the Legislative Assembly and the Supreme, Magistrate Courts and Land and Titles Court.

He was a teacher at Samoa College and at the Institute of Samoan Studies.

Apart from being a Deputy leader for H.R.P.P. he had also worked as the Manager of Congregational Christian Church of Samoa Museum at Malua for two years. 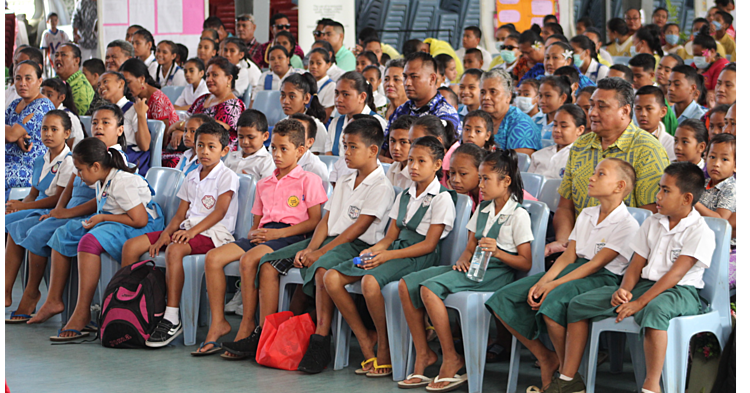 The Attorney General’s Office has admitted that the Office of the Electoral Commission made an error when they entered incorrect information in a candidate’s nomination form. This form led to the approval of the candidate's registration for next year's General Election.