CUTTING OF THE RIBBON: Minister of the Ministry of Works, Transport and Infrastructures, Papali'i Unasa Niko Lee Hang with representatives from World Bank and the Australian Government were given the honors of cutting the ribbon. (Photo: Sialai Sarafina Sanerivi )
Savaii

The ceremony, which was held after the bridge and access road was opened to the public two weeks ago, was officiated by Reverend Elder Reupena Tauiliili of the C.C.C.S at Samalaeulu.

Prime Minister Tuilaepa delivered the keynote address, speaking on behalf of the Government of Samoa and donors about the importance of such a project. 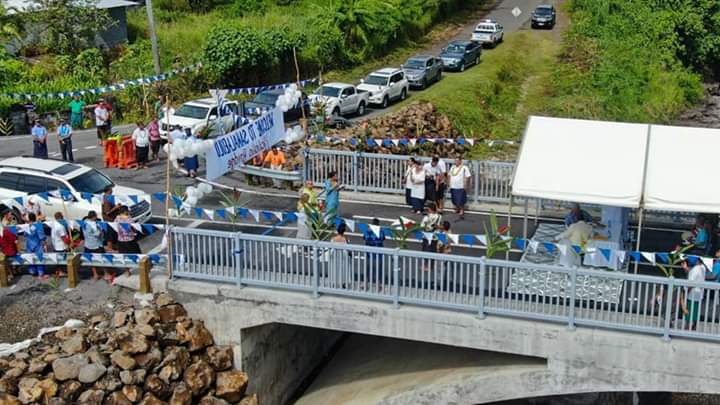 "For many years, the existing ford here at Samalaeulu would become impassable when heavy rainfall and flash floods occurred," said Tuilaepa.

"The construction of a bridge to cross the Mali’oli’o River was identified as one of the priorities in the Vulnerability Assessment of Samoa’s road network which was funded by the World Bank in 2017."

The new bridge is 37.4meters in length and is accompanied by a new 1.5km long road, which Tuilaepa said is designed to withstand extreme weather events, which will allow a safer crossing for all road users.

"It also satisfies the Strategy for Development of Samoa, Key Outcome No. 10 to provide a sustainable, safe, secure, and environmentally responsible transport network that supports Samoa's economic and social development." 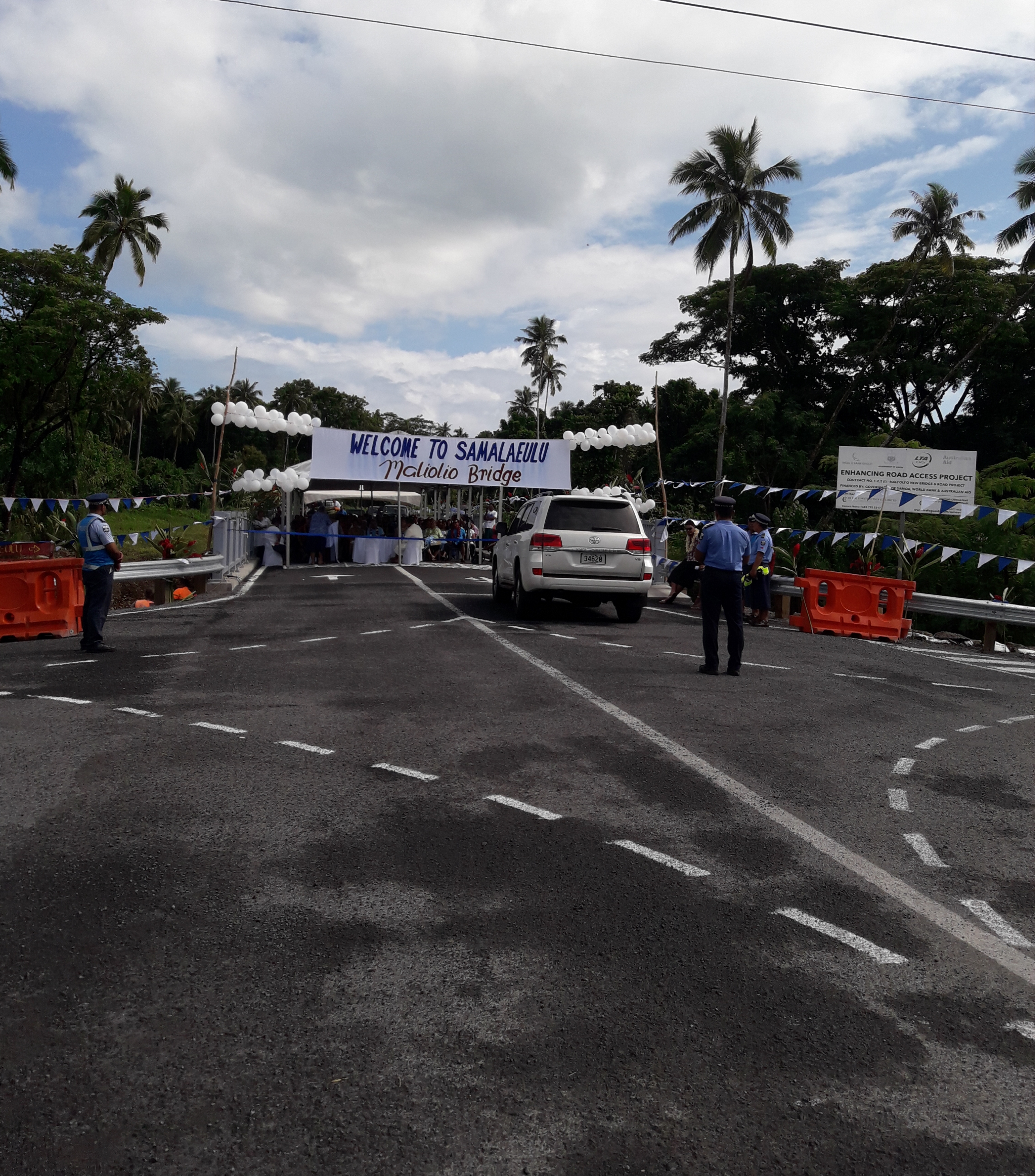 Funded by the World Bank and the Governments of Australia and Samoa, the construction of the Mali'oli'o Bridge and the access road was undertaken by Ah Liki Construction. The construction contractor was Tinai Gordon and Associates as well as Isikuki Punivalu and Associates who headed the Project Management Unit.

Moreover, Tuilaepa informed the gathering that works for the Vaia'ata Inland Route are underway.

"The Vaia'ata Inland Route was also identified as a priority road for climate resilience in the Vulnerability Assessment.

"The Vaia'ata Inland Route will complement the Mali’oli’o Bridge in providing a land transportation link to boost the agricultural, commercial and tourism activities and more importantly provide a safe and efficient road network during natural disasters." 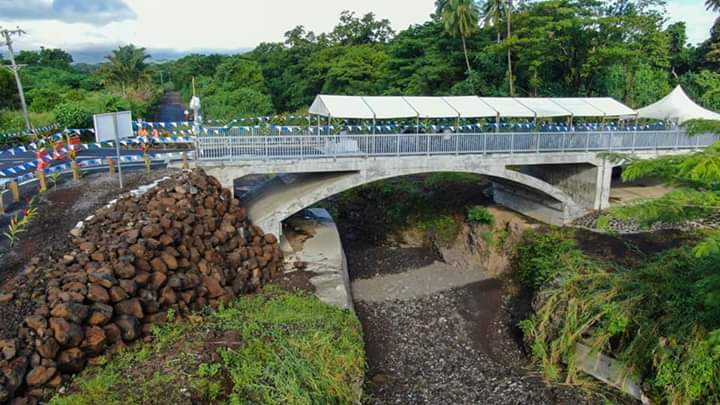 But that is not all as Tuilaepa said the Government of Samoa will continue to work on other major road infrastructure on the big island.

"The Government of Samoa with the assistance of its development partners will continue to collaborate in the upgrade or construction of other major road infrastructure projects such as the Lano and Sapapali’i Ford here in Savaii."

He also took the opportunity to thank everyone who worked hard and funded the project.

Minister of Works, Transport and Infrastructure, Papali'i Unasa Niko Lee Hang was joined by representatives from the World Bank and the Australian government to cut the ribbon that signalled the official opening of the bridge.

The opening of the Mali'oli'o bridge has been highly anticipated by people on the big island of Savai'i.

Ioane Tiai, a 22 year old father from Samalaeulu gave the project the thumbs up and praised the Government for the initiative.

"This is a great project. It isn't just the people of Samalaeulu who are happy about the opening of this work. The whole of Savai'i is also enjoying it," he told Samoa Observer in an interview last week. 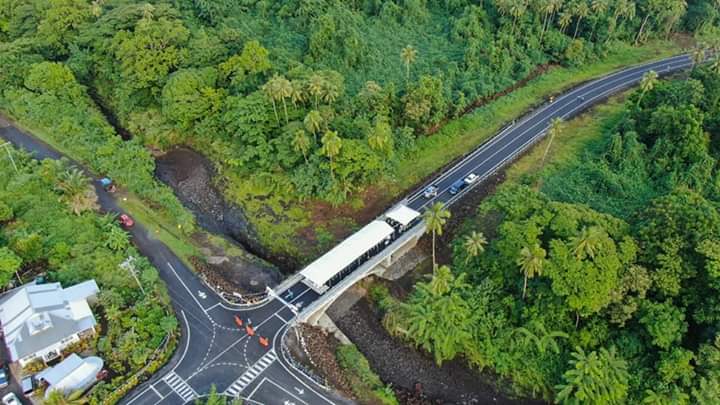 Mr. Tiai said that in the past the villagers of Samalaeulu feared for the lives and safety of the community whenever the river banks burst.

"Especially during bad weather condition and it causes the currents to flow strongly," he said.

"However, now that we have opened the bridge, we all benefit from it.

"We are so grateful that the work is completed and is now opened to the public," he told the Samoa Observer.

"In the previous years, each time it (Mali'oli'o River) bursts, I am either late to school or have no choice but to call in and excuse myself from school.

"I’ve witnessed so many times in the past how people struggle to get through to the other side when it bursts. Therefore, knowing that we now have another way to get through safely it what excites me more about this newly opened project.

"We are so happy and thankful that the government committed to making sure they complete this project as it will benefit everyone on the island."

Ah Liki Construction Company was awarded the T$7.64 million for the project, which comes from a US$26.35 million grant from the World Bank and Australia’s Department of Foreign Affairs and Trade (D.F.A.T.).

The grant was awarded to Samoa to restore key road sector assets damaged by extreme weather events and to enhance the climate resilience of critical roads and bridges in the country.