A senior lecturer at the National University of Samoa (N.U.S) believes that mothers are the backbone of all family developments.

Alo Dr. Silia Finau Pa’usisi, who is a senior lecturer at the National University of Samoa, shared that her late mother, Lepetiomalo Asomaile Finau, had inspired her throughout her life.

Dr. Pa’usisi graduated from the Victoria University of Wellington in New Zealand in 2017 with a P.H.D. in Philosophy.

During her studies, she felt the need to return home to look after her mother.

“Mum, because I am the eldest daughter, I know I have a role to play and that particular role is to look after you," she said.

"She only said, no. That was the only word she said. And that one word was meaningful and was able to determine a million words to me. The whole explanation behind her saying no is the fact that she wanted me to complete this degree.

“Because she has always been emphasizing the significance of education. She usually said to us, your future lies with education,” she said.

“When you concentrate and focus on education you will have no problems in the future finding what you want. I actually believe in that and in addition to that, she usually wants us to stick to our Fa’a Samoa norms and values.” 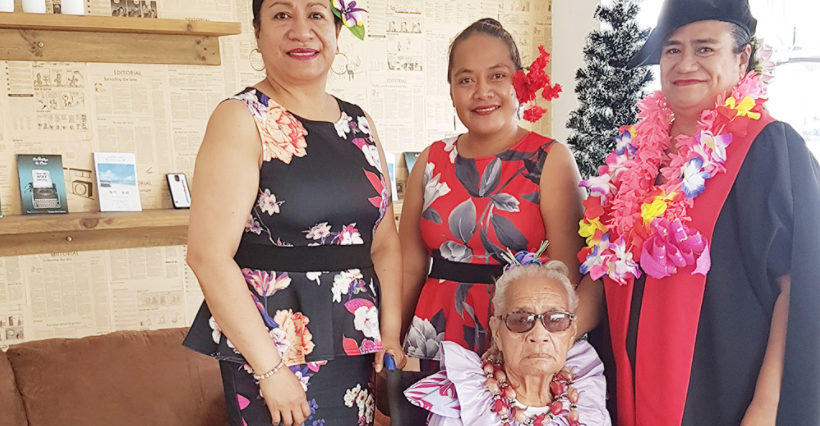 “Sometimes I felt like giving up but I couldn’t because she was always by my side. She is the one who usually reminds us of the morning and evening prayer. She trained us how to speak properly especially to the older people of the community and older relatives and anybody who comes into the house,” she said.

“Mothers are usually by our side, she never leaves us. She is always around.”

She also believes that mothers are the backbone and platform of all family development.

“You see all these churches and how they are functioning. They heavily depend on mothers. They are always around giving the support and advice. Even the tone of the voice, you can easily tell she is angry when she raises her voice, even at a distance but she is always calm when she needs to be calm,” she said.

She further stated that mothers are the strength of every family and it is our mothers who care about everything such as the way we speak, the way we look, and the way we dress and make sure that we have good food to eat. Mothers make sure that the community is healthy.

Dr. Pa’usisi has been a teacher for more than 40 years. She started teaching in primary schools and shared that she treated her students as her own children

“I usually make sure that they are comfortable in the school environment just like how comfortable they are at their homes with their own mothers,” she said.

"And mothers should be able to know the fact that they are born leaders. It’s only a matter of ensuring that they utilise those talents, to lead their families, lead a group like the village community, to lead churches and to become Members of Parliament so that they contribute to making decisions for the benefit of the whole population."