Motorists and residents of the big island of Savai'i have embraced and welcomed the opening of the Maliolio Bridge, which has made travelling a whole lot easier and safer for them. They have also commended the Government for being true to its motto of "what's good for Upolu is also good for Savai'i."

Unlike the usual Government practise of grand opening ceremonies amidst much fanfare, the project was opened to the public last week.

Since then, Project Supervisor for FICO Constructions, Junior Finau, said members of the public in Savai'i have nothing but good comments with regards to the project.

The multi-million-tala project at Samalaeulu was built by Ah Liki Construction Company and funded by the World Bank, Australia, and Samoa.

Ah Liki had subcontracted FICO Construction and Apia Lua Construction, supervised by Tinai, Gordon and Associates for the project.

The project's initial cost was $7.64 million.

Speaking to the Samoa Observer, Junior Finau said the only work they are finishing at the moment is "road marking".

"But the most important thing for us is that the public is enjoying the project," he said.

"After the road marking, we will hand it over to the government." 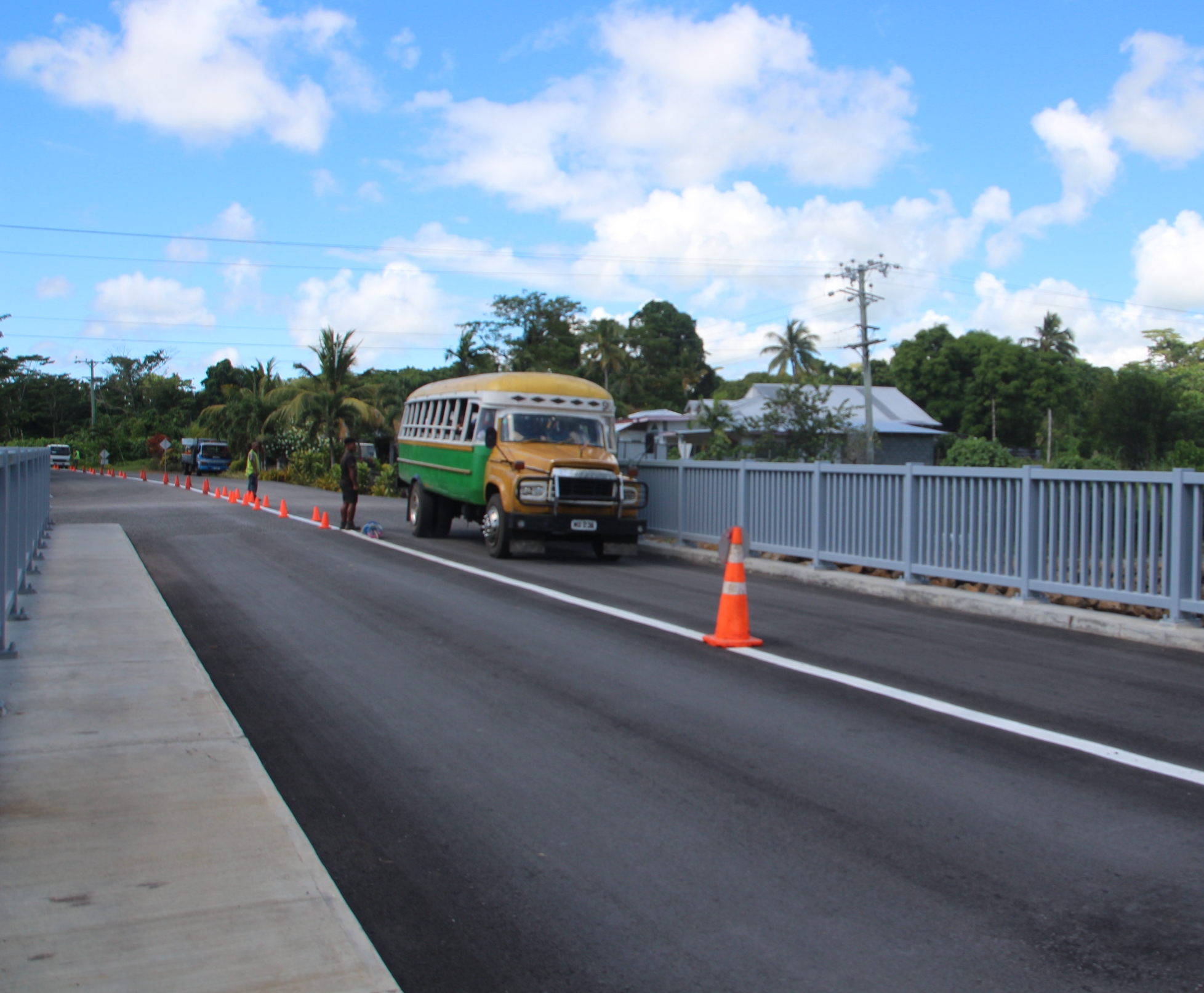 The opening of the project, according to Mr. Finau, was highly anticipated by the people of Savaii.

"For so many years, the people of Savaii have been waiting for the completion of this bridge, and to see it come into fruition is amazing.

"There was a bit of delay with construction because of bad weather and so many unforeseen circumstances, but all turned out well at the end."

He went on to say that the newly opened project will benefit everyone in Savaii.

"As I said, this is a great project for the people of Savaii. The risk factor was that lives were always in danger when the river banks burst.

"And as you know lives were lost in the past when people tried to cross to the other side while it was bursting. We all are aware of how dangerous it is when the river bursts.
"However, that’s going to change with the opening of this project. Sometimes during bad weather getting across to the other side of the island and vice versa are cut off for two days or more because of the strong currents and flow of the mali’oli’o river.

"However, people in Savaii now have the advantage to continue traveling even in bad weather.

"We will be able to continue traveling and cross to the other side.

"This project started off from a green-field. There was a lot of work needed to be done, but it turned out okay at the end and we are grateful that it’s done are people are enjoying it."

Ioane Tiai, a 22 year old father from Samalaeulu gave the project thumps up and praised the government for the great initiative.

"This is a great project," he told Samoa Observer.

"It isn't just the people of Samalaeulu who are happy about the opening of this work.

"The whole of Savaii is also enjoying it."

In the past, said Mr. Tiai, the villagers of Samalaeulu fear for the lives and safety of the community whenever the river banks burst.

"Especially during bad weather condition and it causes the currents to flow strongly.

"We are so grateful that the work is completed and is now opened to the public," he told the Samoa Observer.

"In the previous years, each time it (mali'oli'o river) bursts, I am either late to school or have no choice but to call in and excuse myself from school.

"I’ve witnessed so many times in the past how people struggle to get through to the other side when it bursts. Therefore, knowing that we now have another way to get through safely it what excites me more about this newly opened project.

"We are so happy and thankful that the government committed to making sure they complete this project as it will benefit everyone on the island." 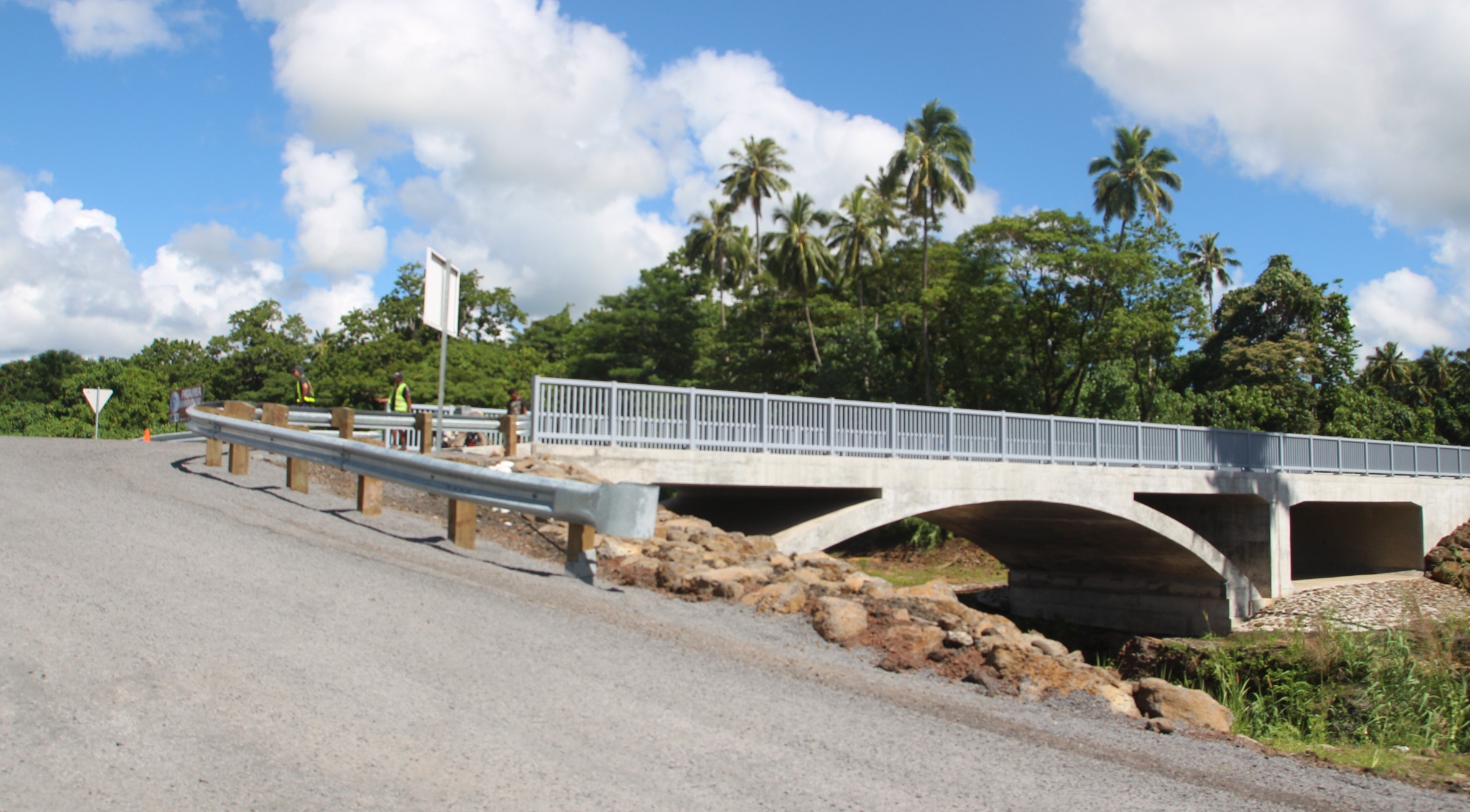 A bus driver from the village of Safotu who did not want to be named said he is ecstatic about the new project.

“As a bus driver, I was happy to find out that the project or road was opened to the public," he said.

"From experience, whenever the river bursts, we make the call whether to cross or not. It’s never easy. In some cases, people pressure me to cross as they want to get to where they want, while some want me to prioritize the safety of everyone. Therefore, it puts pressure on me. "However, now that the road is opened to the public, we no longer have to go through that, and this road provides the safest route to cross to the other side."

Samoa Observer contacted the Chief Executive Officer of the Land Transport Authority on whether an official launch or opening will be conducted for the multi-million project.

However, Galuemalemana Titi Tutuvanu Schwalger said they are yet to make a decision on that.

She said to follow up with them on Friday as they will be likely to have a final decision for that by the end of this week.