The Deputy Prime Minister, Fiame Naomi Mata’afa, has deflected suggestions from the Prime Minister she should consider resigning after a heated parliamentary exchange between the nation’s leaders on Tuesday.

Fiame questioned whether she had been compared to the “devil” by the Prime Minister, Tuilaepa Dr. Sa'ilele Malielegaoi, on Tuesday in a debate that became about Ministers' rights to make public criticism but began as a review of amendments to the Electoral Bill 2020.

After she spoke about the amendments, Tuilaepa said that Fiame, and any other Cabinet Minister, should resign if they had objections to proposed legislation. The Prime Minister said that speaking critically was something that should be reserved for Cabinet.

But Fiame told the Samoa Observer she would not entertain the suggestion she consider stepping step aside.

“No.  He didn’t choose me; I was appointed by our party," said Fiame when asked by the Samoa Observer whether she would resign.

Tuesday’s display of tension between the leaders of the Human Rights Protection Party began after Tuilaepa said there was a window of opportunity for lawmakers to raise concerns about the proposed amendments.

Fiame spoke to one proposed amendment relating to the definition of “permanent residency” - which would require voters to cast ballots in the electorate in which they reside. 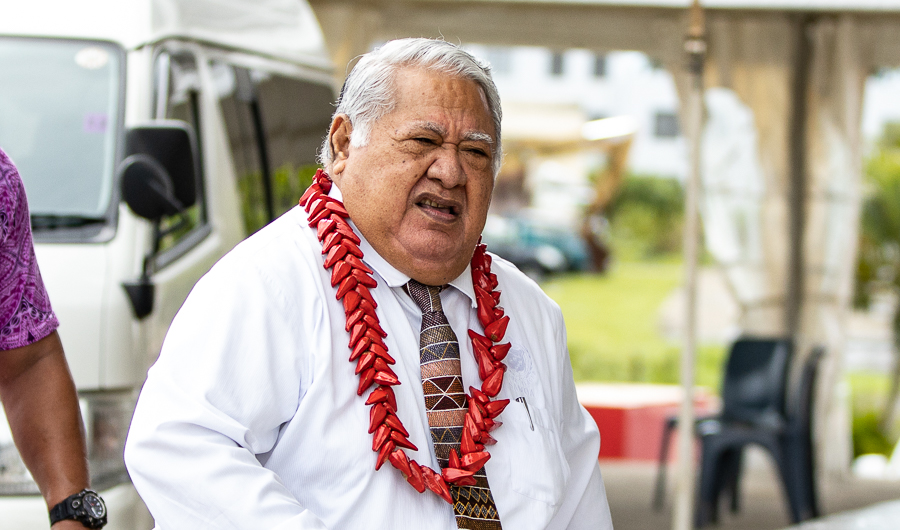 The Deputy Prime Minister said the residency requirement had  implications for Samoan culture and referenced the regularity with which electoral laws had been changed in the past. Those comments drew heated criticism.

“We have made numerous amendments including [to] the Electoral Constituencies Bill and the current amendments specifically targets permanent residency.”

The Member of Parliament from Lotofaga referenced previous amendments which made voters who reside in Apia have to return to Savai’i and rural villages to vote.

Tuilaepa responded by noting after every election inquiries are conducted to determine issues that need to be addressed which has led to numerous changes to improve the running of elections.

“[It is also to] eliminate corrupt[ion] which is what many are saying,” he said.

But Tuilaepa then stated that every time a reform is proposed: “The devil acts quickly to break it, because we will not break away from the devil.”

Fiame took to the floor and expressed disapproval at what she interpreted as having been referred to as the “devil”.

“I strongly believe that when one expresses views it shouldn’t be discouraged in here (Parliament), it doesn’t necessarily mean I am against the Bill, the Prime Minister referenced the many Bill amendments and we can all attest to that,” she said.

“In here we can freely express our views.”

Fiame then turned to the Prime Minister:

“Tuilaepa, are you saying the devil is standing here….. for expressing my views?

But the Prime Minister returned the argument by suggesting his deputy had violated the “collective responsibility of Cabinet”.

“Any [Cabinet] Minister that does not agree with us, you have the opportunity to tender your resignation,” he said.

“The decision that I rule on [...] all of you Cabinet Ministers if you disagree you know what to do.

“I speak as a leader of this Government”.

Tuialepa questioned the Deputy Prime Minister on why she didn’t raise her concerns about the amendments to the Bill earlier.

Fiame said she was not against the Bill but merely expressing her views; if the Prime Minister’s Office was offended, then she apologised, she said.

Tuilaepa further explained that Cabinet Ministers should raise issues in Cabinet not in Parliament.

“It is not pleasant the Bill is being deliberated and a Cabinet Minister expresses views after a speech in Parliament today (referring to his Ministerial speech earlier in Parliament),” he said.

Tuilaepa said the time for Cabinet Ministers to express their views was during Cabinet meetings.

Later on Tuesday, Fiame told the Samoa Observer that her expression of views followed the Prime Minister’s address in Parliament on Tuesday about Samoan culture, in the context of proposed Bills relating to the Land and Titles Court (L.T.C.).

“[Tuilaepa made a] long ministerial speech in the morning, in which he noted the importance of the fa’asamoa (Samoan way) in line with the amendments to the Lands and Titles [Court] Bill, which has to do with our respective Chiefs,” she said.

Fiame said the Prime Minister’s Ministerial speech highly touched on the fa’asamoa while the Electoral Amendments 2020 also touches on the definition of a person’s residency, something which she said lies at the core of Samoan identity.

Asked whether she was speaking as a Minister, or as an M.P. representing the concerns of her constituents, Fiame responded: “You cannot step away from the fact that I am Cabinet Minister, but at the end of the day we are all Members of Parliament.”