Convening virtual meetings of Parliament may become the new normal in the time of coronavirus and a state of emergency thanks to more than $300,000 in video conferencing equipment introduced on Tuesday.

The equipment is funded by the Government of Japan and its implementation partner, the United Nations Development Programme’s ‘Strengthening Legislatures in Pacific Island Countries Project (S.L.I.P.).

On Tuesday Parliament’s Speaker, Leaupepe Toleafoa Faafisi. extended his gratitude on behalf of the Samoan Government to the Japanese Ambassador to Samoa and the United Nations’ Resident Representative, Mr. Jorn Sorenson. during the official handing over ceremony for the equipment. 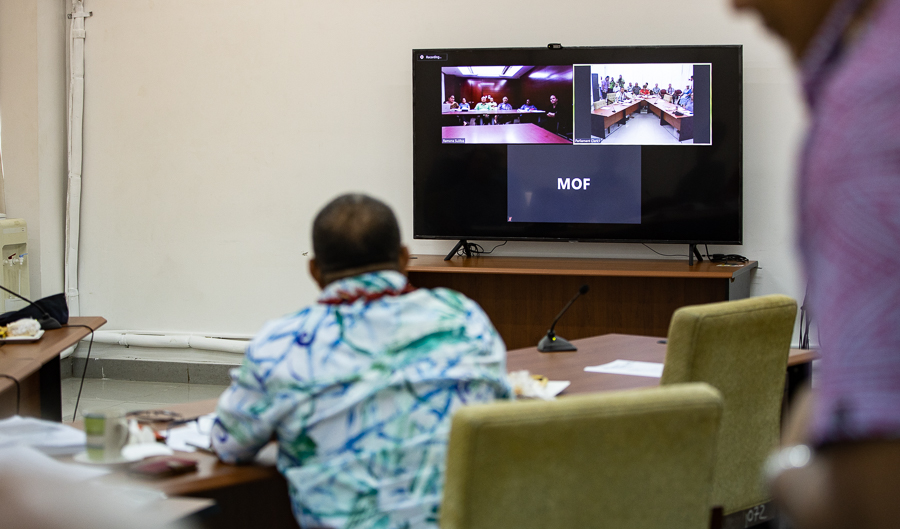 Leaupepe said these were exciting times for him as a Speaker with the advent of such equipment.

“We should have had this ages ago,” he said.

Leaupepe says the necessity of such technological equipment is shown especially in times of crisis, such as the current national lockdown.

“This equipment is all to help strengthen Parliamentary works between its personnel, as well as between other Pacific Island countries in terms of updates during this time,” he said.

“And so I thank the Government of Japan and the [United Nations Development Programme] because where else are we able to get a lot of money for such equipment?”

At the time of Tuesday’s hand over ceremony, the recipient Parliamentary Committee was already engaged in a virtual meeting with public stakeholders in another room.

This was the first time Leaupepe had seen the equipment in action.

“I was surprised to see what was happening, it’s just like they were talking face-to-face,” he said.

The last Parliament pre-sitting session ahead of Parliamentary sitting earlier this month was cancelled due to a state of emergency rule prohibiting more  than five people gathering in one place.

But this will not be the case for the next pre-sitting meeting, even if state of emergency conditions remain in force, Leaupepe said.

“Now we will be able to sit in my office or home with my own device and still be able to get the briefings of different bills or laws,” he said.

“It will limit moving around and limit the time spent on going from one place to another; this [Online Conferencing Facility] will be very instrumental.

“Now Members of Parliament will now be able to access these briefings at any time and there will be no excuse saying they do not understand because there was no briefing.”

Leaupepe said that, should a Parliamentarian show up unprepared lacking understanding of Bills and matters under discussion in Parliament; it will be their fault for not making use of the online platforms available to them:

“All these good deeds are due to the good relationship between our Government and the big countries, and as [the Japanese Ambassador] said, their assistance to Samoa is amongst their priorities.

“And, because of this, we are very grateful.”