The factory where ovens to bake the coconuts was burnt to the ground. (Photo: Vaitogi A. Matafeo )

Exporter of locally-produced coconut oil, Pacific Oil, has lost one of its factories early Thursday morning to fire.

An employee, who did not want to be identified, told Samoa Observer at the scene that the fire started after 4am.

“The fire started early in the morning and it's 7am and the firemen are still trying to put out the fire three hours later,” said the worker.

A warehouse at the company's premises at Nu'u, which contains one of the company’s combustion burners that is used to extract coconut oil, was lost during the blaze.

The Fire and Emergency Services Authority (F.E.S.A.) was already at the scene when this newspaper arrived with the Assistant Commissioner, Tanuvasa Petone Mauga referring all questions to the Commissioner.

“All comments for major fire incidents come from the Commissioner,” said Tanuvasa. 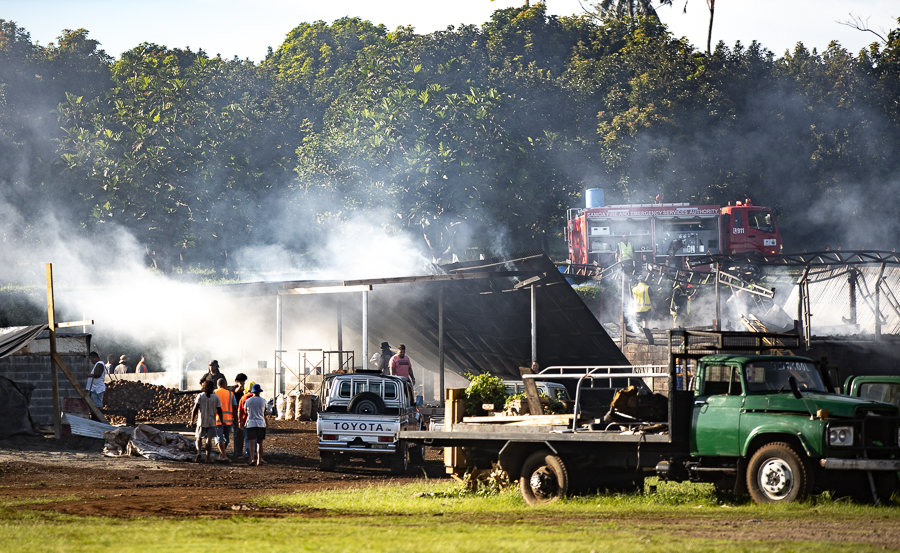 A Pacific Oil worker, who spoke to the Samoa Observer on the condition that he is not identified, said the burnt down factory contained a combustion burner for the coconuts.

“We have other ovens on that side and I think it is better to have ovens in the open rather than contained in a factory as this is the end result. The ovens should be placed in open space,” he said.

“When the F.E.S.A. responded, there was only one fire truck and then more trucks followed and it’s after 7am and there’s still fire under the debris that the firemen are trying to eliminate.”

The worker said several other combustion burners belonging to the company were also affected.