The Samoa Observer counted close to 30 people congregating in front of the money transfer company’s head office on Vaea Street on Tuesday, who appeared to be totally oblivious to the S.O.E. orders banning the gathering of five or more people, and stood shoulder-to-shoulder with other customers.

It is understood the company’s main outlet and agencies in the other suburbs have a policy of only allowing up to five customers at a time to enter their offices. However, there appeared to be no protocols put in place outside their office, to ensure each person was standing 1.5 meters apart from the next person as a defense against coronavirus (COVID-19) infection.

Western Union customer, Vaifou Telea, told Samoa Observer that he was there to collect money sent by relatives living abroad and the service has been slow as only up to five customers are allowed in at one time. 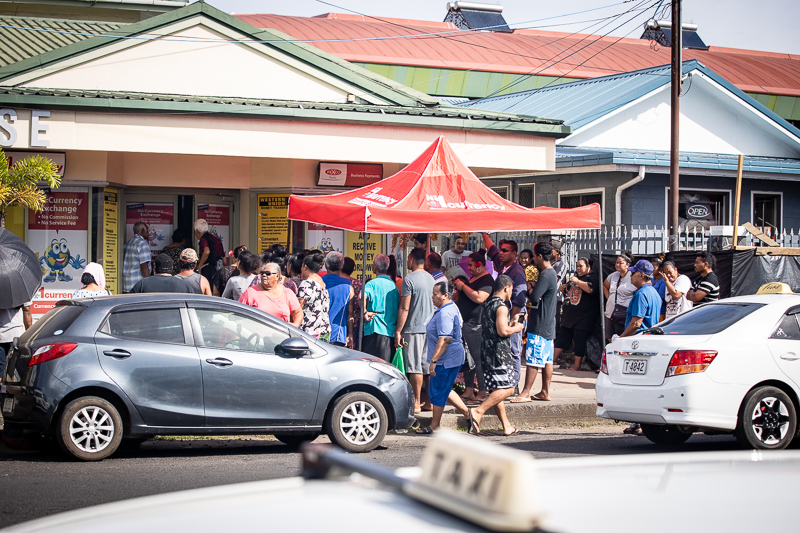 “We are all waiting here for our turn to go inside and retrieve our remittances from our families overseas, it’s going to be a long day out here since the amount of people allowed inside is limited,” he said.

A security guard had earlier told customers that not everyone could go in simultaneously as it would breach S.O.E. orders, according to Mr Telea.

“We were told by him that five below are only allowed inside at a time as part of the state of emergency process.”

The Samoa Observer also observed the build-up of a large group of customers in front of the same business premises last week.

Attempts by the Samoa Observer to get comments from the Western Union management were unsuccessful as of press time.