Michael Fatialofa can walk again having previously been told he would spend the rest of his life in a wheelchair. (Photo: Twitter)
Samoans abroad
Rugby union

In his first interview since the injury that ended his rugby career, Worcester lock Michael Fatialofa spoke about his “traumatising” last three months in hospitals.

The 27-year-old former Auckland and Hurricanes player suffered a fractured spine in a English Premiership match against Saracens in January.

Fatialofa spoke to TVNZ News’ Matt Manukia after months of public silence, having not previously wanted to relive the painful memories of not being able to move, talk or even cough.

"It's a time that's tough to think about," Fatialofa told Manukia.

"My roommates were victims of gun violence and stabbings and I could hear everything going on. Just all the beeping and no sleep. It's something I don't really like thinking about now that I'm past it.

"I heard some people die next to me. It was quite traumatising. All I could hear was a beeper go off, everyone rush in and then I have a new roommate the next day."

Fatialofa said he was still conscious after the tackle against Saracens, but remembers his body “shutting down” immediately.

"From my neck down, I couldn't feel anything or move anything," he told 1 NEWS.

"It was pretty scary, and I was really short of breath because, what I did, was the spinal cord was compressed and anything below the spinal cord is affected and that includes my lungs and I was just kinda trying to breathe."

A fracture in his C4 vertebrae and a spinal contusion caused Fatialofa “unbearable pain”, and he barely slept for the first month of his recovery with nurses required to reposition his body every two hours to avoid pressure ulcers.

"I was pretty scared," he said.

"I just didn't want to be a burden to my wife and family. But then I thought I'd just leave it with God and see what happens."

Fatialofa   is currently at a specialist spinal clinic at the Royal Buckinghamshire Hospital, where he has progressed to walking unaided after initially being told to prepare for life in a wheelchair.

"Walking is the tip of the iceberg with these types of injuries," he said.

"My hands are probably the hardest thing for me - getting my hands functioning.”

With England under lockdown due to the COVID-19 pandemic, the hospital is not allowing any visitors, including Fatialofa’s wife Tatiana. 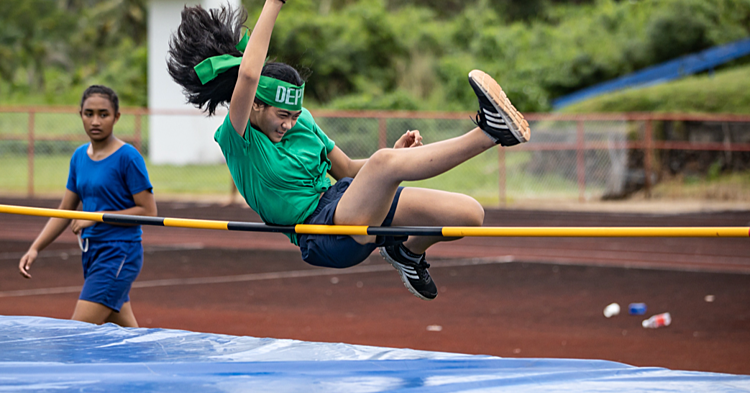 St Mary’s college was divided into four houses this week, each with their own colour, as part of an interschool athletics tournament that could lead participants onto bigger things.