The last of seven teams of Samoan doctors deployed to their homeland in the wake of the measles epidemic has left the island after a three month mission of the Samoan Doctors Worldwide Volunteers.

Over the last three and a half months, seven teams of between six and eight doctors of all specialities have been in Samoa to give a much needed boost to a healthcare system still weak from the measles epidemic.

The missions were organised with support from the University of Otago and its Pacific arm, Va’a o Tautai, and the Ministry of Health.

Faumuina Dr. Fa'afetai Sopoaga, the Head of Va’a o Tautai, said all the volunteers, who are of Samoan descent but live abroad, are continuing to pray for Samoa.

“As we head into uncertain times, and as the team members are called back to their places of work where they are now needed for the coronavirus response, [our] prayer is that God will continue to protect Samoa,” she said.

“Samoa has strength of connectedness of its people at the cultural, community, and church levels to support our Government’s efforts at this time. The foundation of our country is based on our sovereign God. He is our hope.” 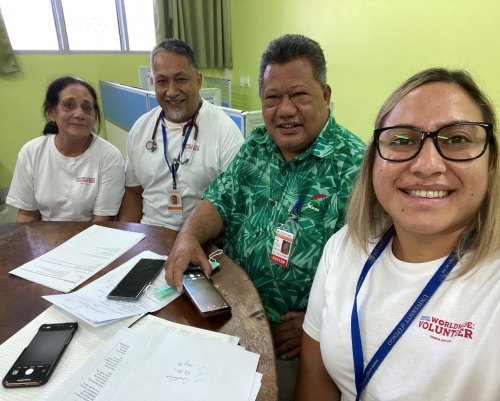 “This was an amazing effort, this shows that we can indeed achieve incredible outcomes for our health sector,” said Leota Dr Lisi Petaia, psychiatrist at the Mason clinic, in Auckland who was part of the organising team for the mission.

“We are in this journey for the long haul to serve Samoa where we are able.”

The doctors were based at the National University of Samoa at Otago House throughout their stay.