United efforts led to capture of all 36 prisoners

The Ministry of Police, Prison and Correctional Services have acknowledged the assistance of the community in the recapturing of 36 convicted criminals, whose dash for freedom on Monday night made it the largest breakout in Samoa's history.

Speaking on behalf of the law enforcement agencies, Police Commissioner Fuiavaili'ili Egon Keil said they wouldn't have been able to round up the prison escapees without the community's help.

“We want to thank the members of the community, the aumaga, and village councils that assisted the Police that were working around the clock to capture the prisoners," he said.

"And out of the 36 prisoners that escaped we managed to take them back into custody.”

Female Prison Guard, Tafaili Matautia, told the Samoa Observer during an interview in the wee hours of Tuesday that she is fortunate to be alive and the break out was initiated by three male prisoners.

Mrs. Matautia told of the horror she saw when one of her colleagues was struck on the head and beaten quite badly by one of the prisoners.

According to Fuiavaili'ili, there are several theories behind the mass breakout, which included resentment amongst the inmates at the sharing of a television amongst the cell blocks.

"When one cell block has too much television time, the other cell block didn’t like and that television that was passed around was one of the first things they destroyed." 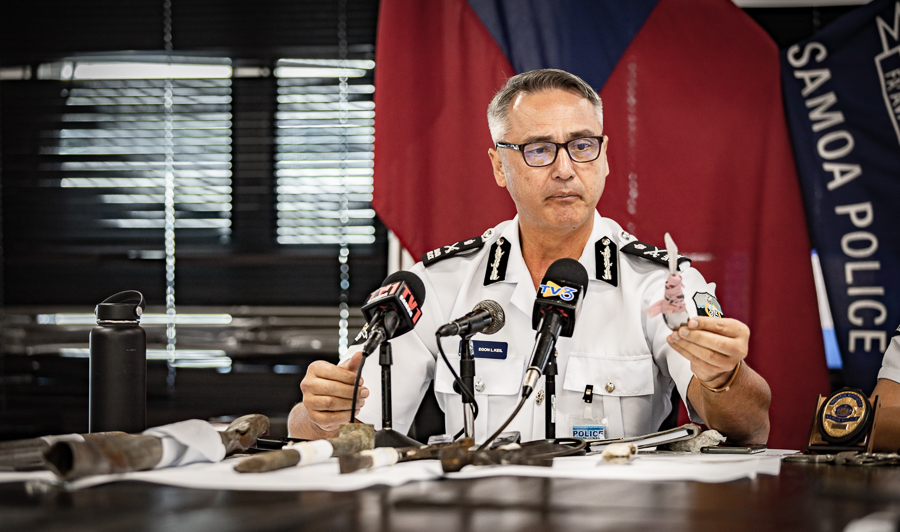 During the press conference, it was revealed the prisoners used shank (spoon that's sharpened used as a stabbing tool), crowbars, hammer, knives and medals and there were also cell phones  found on some prisons.

On Monday night following the breakout, 21 prisoners were recaptured and by Wednesday the Police had another 11 in custody, with the remaining four apprehended early Thursday morning.

The Commissioner made special mention of the Catholic Catechist Pio Filipo Paiti and Mariana Kolisi Paiti Faleseela-uta, for notifying the Police, which lead to the capture of the last four prisoners.

“They took care of the four prisoners; they fed them and encouraged them to do the right thing,” he added.

Fuiavaili'ili also praised the professionalism shown by the Police on the night of the breakout and over the following days, which led to the recapture of the 36 inmates.

“I can safely said that our mission has been accomplished and I like to thank our staff who were working [around the clock] to bring these prisoners back into custody, and they did it with such professionalism, efficiency and [outstanding] coordination that we managed to achieve this mission,” he said.

Ex-policeman Autagavaia Tipi Autagavaia commended the Police for recapturing most of the prisoners in less than 48 hours.

“This is the biggest mass prison break out and they managed to capture them in such a short time and that is commendable,” he said.

“This mass prison breakout a total of 36 prisoners escaped and they (Police) did a phenomenal job in securing the safety of our people in the middle of an epidemic,” he added.