There will be no more flights into Samoa nor will people be allowed to travel between Upolu and Savaii from midnight on Wednesday. (Photo: Vaitogi A. Matafeo)

Cabinet has moved to completely close Samoa’s borders from midnight on Wednesday, and will stop people travelling between Upolu and Savaii until further notice.

The decisions, which include a restriction on supermarket opening hours, were among sweeping measures passed in a Cabinet meeting on Tuesday morning. They follow the hastening spread of the coronavirus in the region and a Monday night mass escape of prisoners from Tanumalala Prison.

The final incoming passengers coming to Samoa before the lockdown will be quarantined at the Faleolo Health Centre.

Announcing the changes on Tuesday afternoon, the Prime Minister, Tuilaepa Dr. Sa'ilele Malielegaoi, acknowledged Samoans who could be stuck overseas because of the changes.

“We are looking at having flights to Fiji so we can bring our people in Fiji, same with Tutuila. We have citizens stuck there and the last flights will allow them back into the country and once that’s finished, we can close our borders and we will have nothing to worry about,” said the Prime Minister.

"These are the final flights and if they miss out, that is their problem. Keep in mind during these  are critical times and there is an epidemic they should have never traveled, knowing what is happening.

“There are students overseas who have opted to remain, because it is riskier to travel. But if they remain indoors, they wouldn’t have a problem.”

But those who do not have positive proof dated within five days of their arrival that they do not have the coronavirus will face 14 days' quarantine.

The Prime Minister thanked the Church of Jesus Christ of the Latter Day Saints for making church buildings available for quarantining purposes..

"They have opened their church building for these people and more than 800 people can be housed in this building," the Prime Minister said.

The border closures do not apply to cargo, fishing or fuel ships.

Cabinet has also appointed an advisory committee for the duration of the state of emergency. It will be headed by Aumua Ming Leung Wai with Fepuleai Patrick Fepuleai and Savalenoa Mareva Betham-Annandale.

Supermarkets will now only operate from 6am until 4pm, and the Price Control Board will be on the lookout for unnecessary price hikes.

“The supermarkets’ will remain open and there is no need to panic shop and purchase in bulk,” Tuilaepa said. 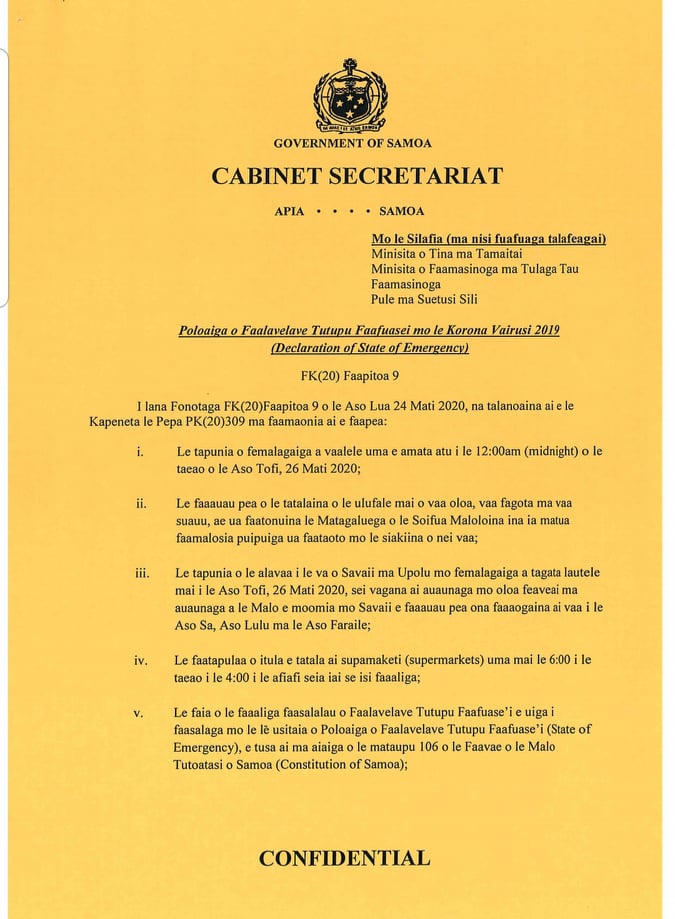 No people are to travel between Upolu and Savaii from midnight on Wednesday, but the ferry will travel carrying food and supplies.

The crackdown on movement and Samoa’s borders come a day after New Zealand moved to Alert Level 4, closing its borders and severely restricting movement in a bid to stop further community transmission of COVID-19. 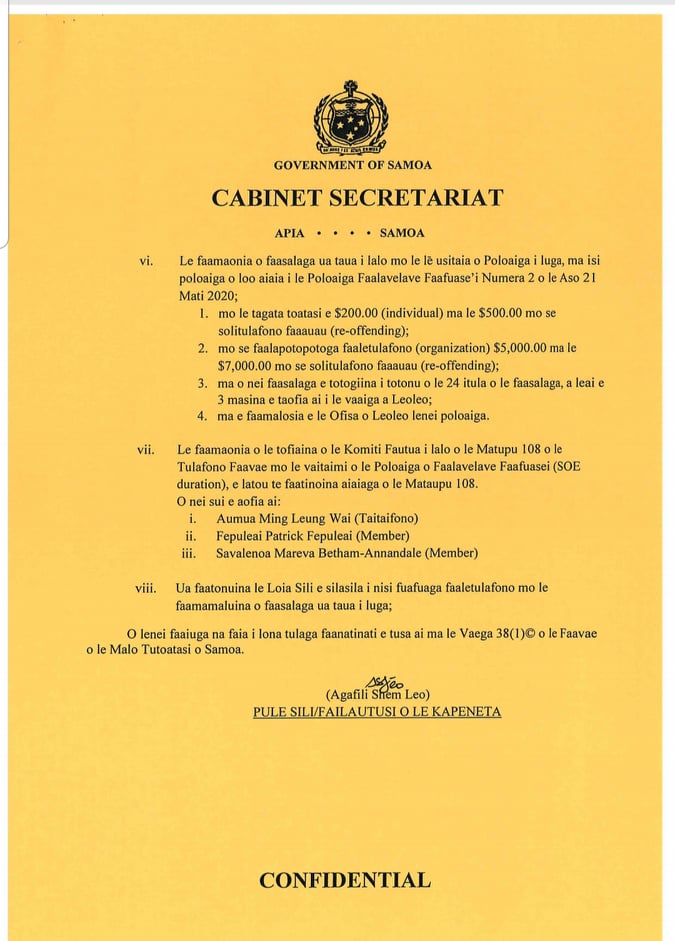 The nation has 155 cases as of Tuesday 24 March, four of which are confirmed as having been infected in New Zealand, not abroad. Three are in Auckland and one is in the Wairarapa. Schools and non-essential workplaces are now closed for four weeks.

A planeload of Air New Zealand passengers arriving from Auckland shortly before 2pm were the first to experience the consequences of the new state of emergency regime. More than 100 passengers from the plane were taken straight from the airport and into a shared quarantine facility.

The amended orders, which come in addition to restrictions announced on Friday, were summarised by a Government circular as follows:

“Effective from 12am of Thursday morning, 26 March 2020, travel for passengers between Upolu and Savaii cease. This does not include ferry travel for trade and Government services,” says the SOE.

Opening hours for all supermarkets is also restricted by the new orders from 6am-4pm, until further notice

And lastly but not the least, Penalties can now be imposed as mandated by the new orders which prescribes that;