A total of eight prisoners remain at large warns Police after a mass prison break on Monday night.

Twenty-nine prisoners escaped from Tanumalala Prison after they attacked the guards, ransacked the offices and broke free.

As of 8.00 am on Tuesday morning two prisoners were arrested and three turn themselves in to the authorities, leaving 10 on the run.

"We just caught another one," Police Commissioner Fuiavailiili Egon Keil confirmed to the media on Tuesday morning.

The on-the-loose prisoners were found in villages such as Aleisa and Fasitoo uta.

Another prisoner, Sofi Uale, was captured before noon.

Uale's capture came after Pauna Kalolo was caught at Fasitoo-uta, according to a statement released by the Police.

The Commissioner also said that they have stationed Police Officers at the Fiaga Power Plant and increased their patrols of other essential utilities, Embassies and high profile institutions. 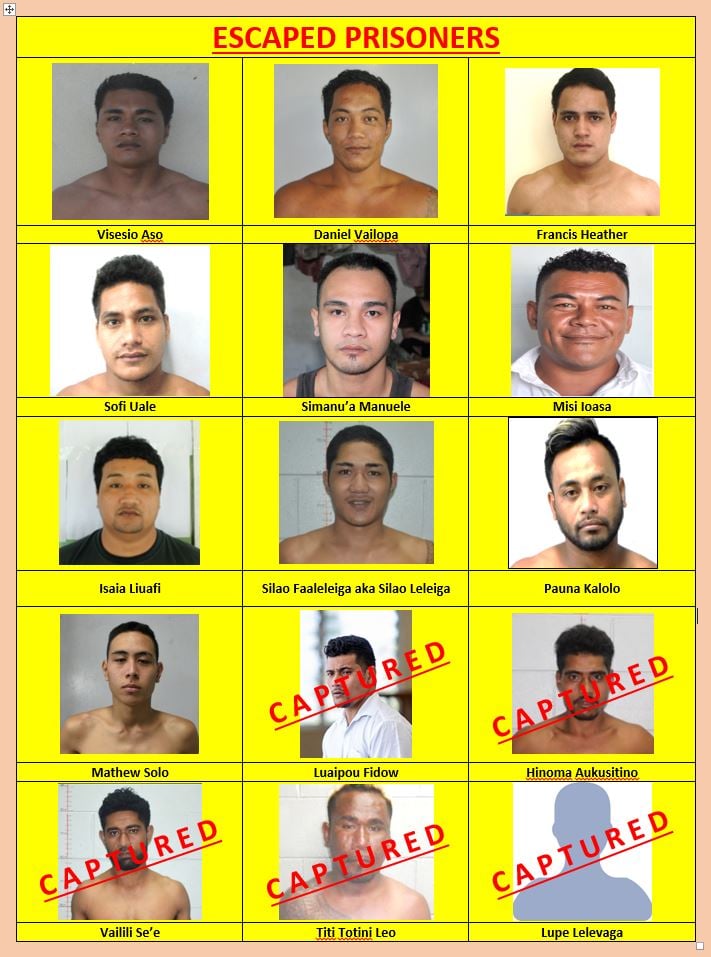 Doctors and nurses were called to return to work to deal with injuries from the incident on Monday night at the Tupua Tamasese Meaole Hospital.

"They are dangerous fellas these guys so we're trying to get them in as quick as we can and we're going to go all the way until we capture these nine remaining guys," the Commissioner told reporters this morning.

"Do not approach these guys let us do our work".

Among the injured were Prison Guards; one of them is listed in a critical condition.

According to a female Prison Guard, Tafili Matautia, she said that the attack and the break out were initiated by three male prisoners.

Mrs. Matautia told of the horror she saw when one of her colleagues was struck on the head, beaten quite badly by one of the prisoners.

The Samoa Police Service has urged members of the public that the prisoners are considered dangerous and refrain from approaching them.

“We advise the public especially those living in Aleisa, Tanumalala, Leulumoega areas close to Tanumalala prison to be vigilant and report any suspicious activities around your area,” the Police said in a statement.

Police have urged the public to contact (685) 22 222 or any police station near you for any sightings or information relating to these prisoners.

The Police also thanked all of Samoa for the support and the information relay to police as we work to capture these escaped prisoners.