A man facing an attempted murder charge, who left the country despite surrendering his travel documents, is in Australia for the seasonal workers scheme, the Samoa Observer can reveal.

A senior Government official, who spoke on the condition of anonymity because they were not authorised to speak to the media, confirmed that Mr. Vai, whose full name is Jr. Vaituutuu Timu, left for Australia for the seasonal scheme.

A scanned copy of the accused’s passport obtained by the Samoa Observer, shows that he was issued a Samoan passport on 5 September 2019 under the name Junior Vaituutuu Timu. 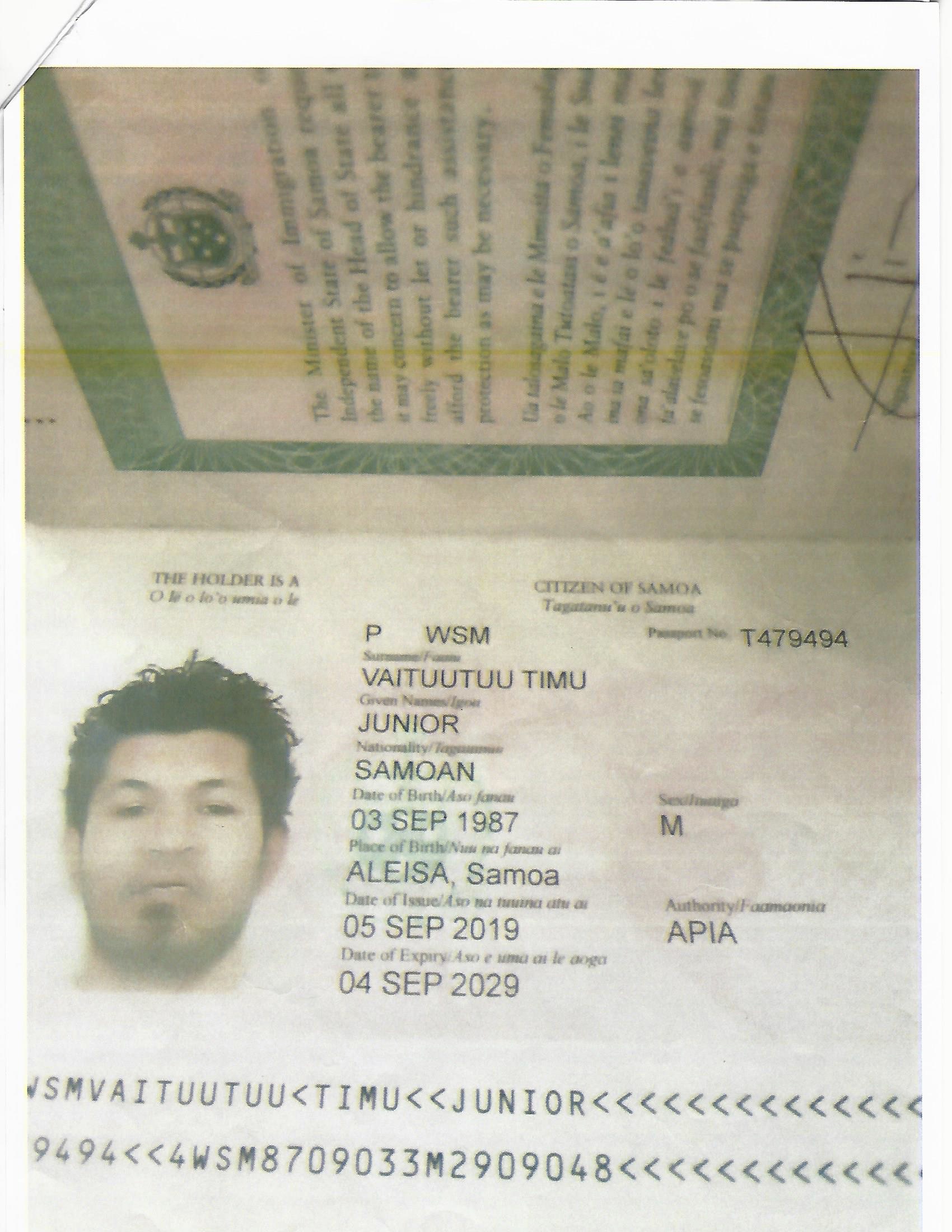 A Police Clearance Report dated 5 September 2019 shows that the same person is said to have “no previous convictions as to the date of issuance of this report”.

But a response from authorities made clear that the man being known by two names and the absence of a Departure Prohibition Order preventing him from leaving the country allowed him to slip past authorities.

The Chief Executive Officer of the Ministry of the Prime Minister and Cabinet, Agafili Shem Leo, said that there is no person by the name Junior Vai recorded on the Border Management System.

Agafili did, however, confirm that a person by the name Junior Vaituutuu Timu was issued a passport in 2019.

"Junior as you always refer [to] is a different person from Junior Vaituutuu," he explained.

"Now, as I said last week, there is no such person as Junior Vai on the [Border Management System]. That means Junior Vai, (if there is a person with that name), has never had or applied for a passport.

"[The] Junior Vaituutuu Timu you are now referring to, has a passport that was issued through the normal immigration processes last year on 5th September.

"Our records show that he lodged his application on his birth certificate and had complied with requirements for applying for a passport."

The C.E.O. added this is the first travel document issued to this individual.

"On the question of whether or not we had received a [Departure Prohibition Order] on this individual, I confirm that we did not,” he said.

Nor was a response received to further questions sent to the Attorney General’s Office.

Last week the District Court sentenced another seasonal worker who had left the country in 2016 - 2018 by using his brother's identity to get a new passport.

He was jailed for two years after pleading guilty to the offences.

Agafili recently Immigration did not receive a D.P.O. for the 33-year-old from Vaitele and Aleisa.

When Agafili was asked about a person by the name Junior Vai and whether records concerning such a person existed in the immigration system, he said:

“No person named Junior Vai was ever issued a travel document.

He added that, after communication with the Office of the Attorney General, it was confirmed that there was no travel document or D.P.O. ever issued to a Junior Vai.

Furthermore, Agafili said it is important to note that the Border Management System (B.M.S.) tracks the identity of a person based on the “biodata” of the passport holder, specifying the name, date of birth, place of birth, place and date of issuance, and date of expiry of passport, he said. 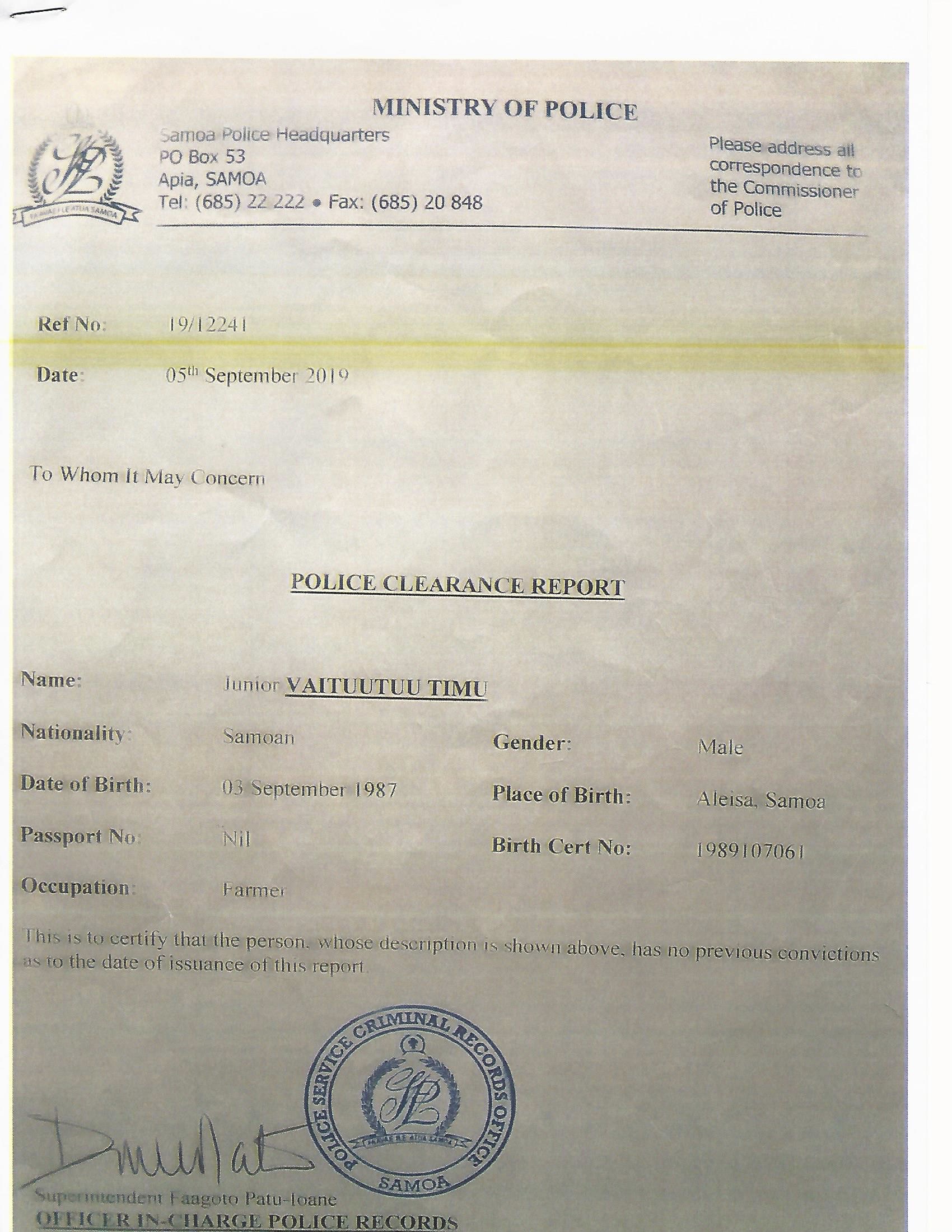 The matter concerning the accused surfaced in Court earlier this month when the 33-year-old farmer failed to appear in Court for his matter.

The prosecution had informed the Court that the accused had his travel documents surrendered on 17 July 2019 and was asked to sign in with the Police station.

The charge against the suspect stemmed from an alleged incident at Vaitele in 2017.

Justice Leiataualesa Daryl Clarke had urged the prosecutor to find out how the accused managed to flee the country after surrendering his travel documents.