Some of the Saint Mary's Primary School students that took part in the awareness programme. (Photo: Renewable Energy Division )

Nine Primary Schools have been selected to take part in an awareness programme to educate them on various environmental issues affecting Samoa.

The programme is facilitated by the Renewable Energy Division (R.E.D.) of the Ministry of Natural Resources and Environment (M.N.R.E.) in partnership with the Improving the Performance and Reliability of Renewable Energy Power System in Samoa (I.M.P.R.E.S.S.) Project. 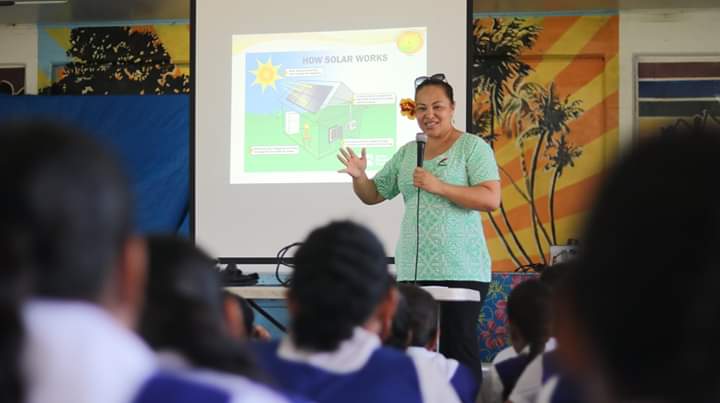 The programme promotes the role played by M.N.R.E. in partnership with stakeholders and communities to achieve Samoa’s obligations to international conventions.

According to a statement from R.E.D., it stated that one of the phenomenal issues being widely discussed in today’s global platforms, workplaces and communities is climate change and its adverse impacts on small island nations.

“On the national scale, Samoa with its features as a Small Island Developing State (S.I.D.S.) and geographical location in the Pacific, is highly exposed to and is prone to intense impacts of climate change,” reads the statement.

It added that cross cutting efforts in various departments of the Ministry [M.N.R.E.] enacts the development and implementation of policies, legislations and projects which aim to reduce and mitigate the level of greenhouse gas (G.H.G.) emissions which primarily depletes the ozone layer resulting in increased global temperatures.

“Consequently, even though our small islands and developing economies contribute an insignificant amount of GHG compared to foreign countries.

“Samoa is still committed to achieve its Nationally Determined Contribution (N.D.C.) target goal “100% of the electricity to be generated from renewable energy sources by the year 2025” to replace our dependency on fossil fuels.”

For some schools that took part in the awareness programme such as Saint Mary’s Primary School and Marist Primary School the aim was to educate students about Renewable Energy Division and its purpose.

Some of the positive feedback from the awareness programme is that schools have asked if it is possible for the Ministry [M.N.R.E.] to organize field trips for students.

The I.M.P.R.E.S.S. project is a multi-million dollar project that aims to enhance sustainable and cost-effective energy production in the Small Island Developing State.

The project is set to support national efforts towards achieving 100 per cent renewable energy electricity generation by 2025, while also contributing to improved energy for everyday Samoans.

R.E.D. is a project based division which was established in 2007. It is one of the 15 Divisions which make up the M.N.R.E.

Its role is to promote climate change mitigation through renewable energy and energy efficiency.

The Police have appealed for information in relation to the death of a man whose body was discovered under the Lelata Bridge last month.