With biscuits and tea, let's now look at other waste of money expenses

Every sene counts. And in tough times like this where our nation is being challenged on different fronts, health and finances especially, the idea that the Government is taking the lead in cutting costs as a precautionary measure is commendable.

It’s undeniable that governments all over are often accused of abuse and misuse when it comes to the use of public monies. This ranges from multi-million-tala protects involving corruption to simple day-to-day expenses, including food, drinks and functions for public officials.

But there is reason to be optimistic in Samoa today looking at some recent developments in the public sector. We are talking about a story titled “Govt. to reduce catering to tea and biscuits” published on the pages of the Samoa Observer on Thursday.

From what we have been told, it appears that the days where the Government would blow out huge sums on catering for work meetings is a thing of the past.

The Chief Executive Officer of the Ministry of Finance, Leasiosiofa'asisina Oscar Malielegaoi, confirmed that as part of budget-connected cost-cutting measures, Government Ministries have been asked to reduce catering to just “tea and biscuits” for all office meetings. He said the message to all the Government Ministries is to avoid unnecessary spending of taxpayers’ money.

“We have records of some years ago, the [catering costs] are very excessive,” Leasiosio said. “It's like Ministries look forward to meetings because they always order large plates of food, [but] that's taxpayers' money wasted."

Over the years, each and every one of us would have had an experience where these meetings, as menial as they are, often become food festivals. There were also instances where the abuse was so rampant alcohol was purchased using some of the budget allocations.

The worst part is that this was not done out of ignorance or the lack of understanding of processes. No this was abuse carried out blatantly with the knowledge that it was inappropriate.

So much so the practice was scrutinised by annual audits carried out by the Government itself. Last year for instance, a monitoring report found that catering expenses incurred by 13 government corporations had blown out by $58,500. That’s just for one year.

Imagine then how much this would have cost during the past ten or even twenty years? We are talking millions of tala, money that could be spent on health, education, housing and to fix those potholes-ridden roads wrecking vehicles on a daily basis.

The irony is that all this was done while public officials kept talking about cost saving measures as if they meant it. They used phrases like transparency, accountability and good governance like they owned it when clearly, looking at some of these expenses, they did everything but.

Which is why we believe the decision announced by Leasiosio is a good example of the Government finally “walking the talk.”

"It is a practice we are pushing towards our Ministries, but not only a push, we have to be seen that we are walking the talk," Leasiosio said. "Meetings and big events should not be treated the same or else operational costs will take up all the money instead of development projects."

We couldn’t agree more. This is why we say the decision taken by the Ministry of Finance on behalf of the Government is commendable. It’s true that we are only talking about food expenses and that might not amount to much in the bigger picture but when the going gets tough, as we are finding it today, every sene counts. And the Government has got to be seen to be taking the lead in being cautions.

The fact is, we already have one of the highest paid public services in the Pacific – compared to our size, population and economy.  On top of salaries, when we sit down to account for the monies that are allocated for perks, benefits, travel, housing, different allowances, vehicles and much more, we will find that this is perhaps one of the most expensive governments to run. It is high time the Government walks the talk when it comes to cost-cutting measures.

Maybe they can start looking at the expenses for public vehicles and the unnecessary travel as the next step. What do you think? 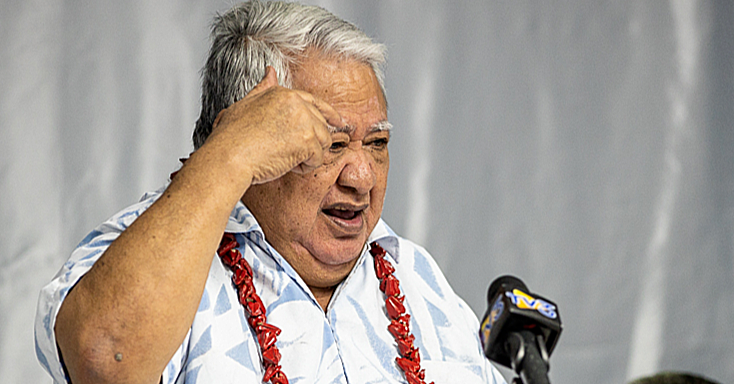