This year’s Girls in ICT Website Coding Competition has been officially launched.

The Minister of Communications and Information Technology (M.C.I.T.), Afamasaga Rico Tupai, opened the competition at the Pacific E-Learning Foundation Center in Vaitele on Monday.

He acknowledged the presence of participating schools as well as the Government’s plans to promote information and communications technology (I.C.T.) as a career option to Samoan girls.

“I would like to acknowledge your presence today, thank you for the initiative. The Government plan at the moment is to take you to the next level,” he said. “We are working towards a paperless government or a digitized economy due to advanced technology and fast communications.” 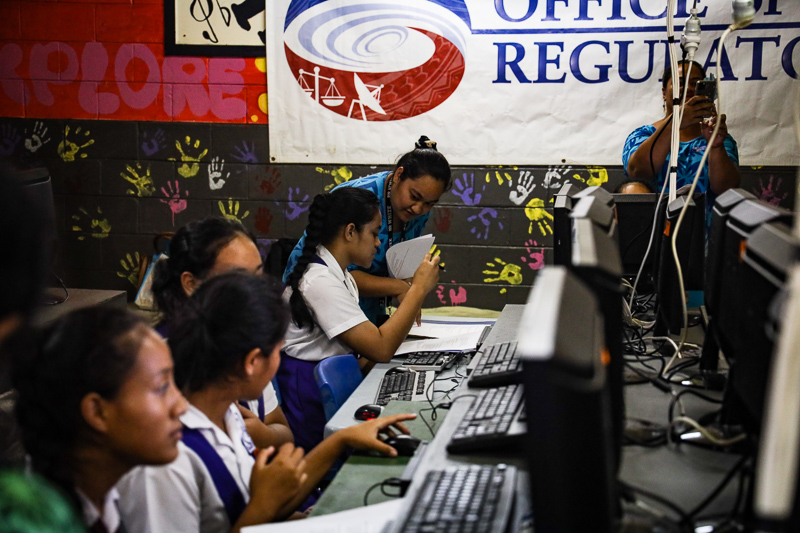 With the Government moving towards “digitizing the country”, Afamasaga said they are keen to empower young women to consider I.C.T. as a profession and improve their knowledge of the subject.

A total of 25 students are taking part in the competition with 17 of them representing St Mary’s College, Faatuatua College and Maluafou College.

Invitations to participate were only sent to private and non-government schools by the Office of the Regulator (O.O.R.), with overseas competitors unable to take part due to the spread of the coronavirus threat.

The competition will be opened to secondary schools including college male students in the next round. It will be run over a four week period with three weeks of training and introduction programs. The final week will be run with the assistance of the New Zealand-based Pacific Corporation.

According to the proponents of the competition, it is hoped that an environment that empowers and encourages girls and young women to embrace I.C.T. studies and careers will be created, regardless of male dominance in the sector.

And the starting point will be upcoming rolling out of the mobile coding program in district schools in Upolu and Savai’i.

"Digicel and BlueSky will be working on the provision of buses or vehicles for distributing Digital programs in every school in Samoa and this Mobile Coding program will help increase the interest in the field for our young generation" he said.

The mobile coding program will be rolled out nationwide after the competition.