Samoa
The body of the deceased woman covered with a white cloth lying on the ground. (Photo: Francis Faalili)

A man and a woman are dead and a gas station was set alight at Malifa on Saturday afternoon, with the Police saying the tragedy happened as a result of domestic violence.

An eyewitness, who was at the scene of the incident but refused to identify himself, told Samoa Observer that a man went to the gas station to confront his wife and got into an argument with her.

He said the unidentified man allegedly started the fire and walked into the gas station and stabbed the wife.

"After he started the fire he then proceeded to hurt his wife with a sharp object, I cannot confirm if it was a knife. We were inside our office and we saw this lady on the ground, while he held her head up and cut her throat," the eyewitness said.

The eyewitness, who works at the Ligaliga Funeral Service, said they ran outside of their office when they saw the man attack his wife and also called the Fire and Emergency Services Authority (F.E.S.A.).

"We ran outside and she was covered with blood we called the F.E.S.A. and called for an ambulance if they have responded earlier the poor lady would still be alive.

The burning of the gas station occured at around 12pm (local time) with the FESA and the Police soon arriving on the scene.

When the Samoa Observer got to the scene, a body covered with white cloth could be seen lying on the ground in front of the Ligaliga Funeral Service premises. 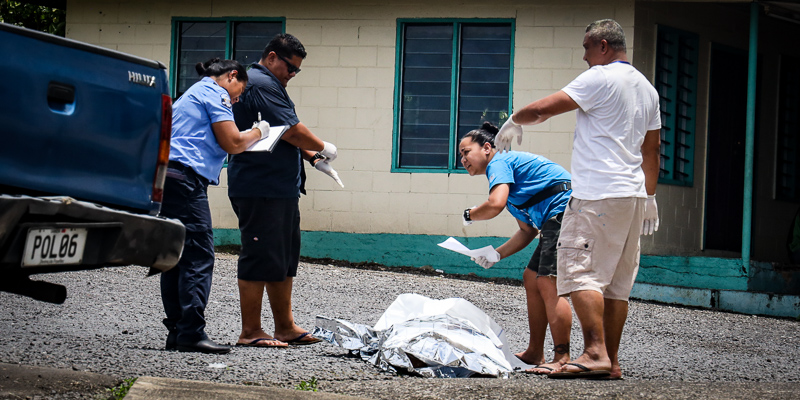 The eyewitness said they saw the unidentified man running off after he slashed his wife's throat.

Police Commissioner Fuiavaili'ili Egon Keil, who was also at the scene by the time this newspaper arrived, told Samoa Observer that it is a domestic violence case and the suspect behind the killing of the woman is also dead.

He said the suspect burnt the gas station and killed his wife before taking his own life.

"It is very unfortunate because the gas station was burned down because of the couple's issues, and we have the suspect but he already killed himself," he said. "Our investigations have confirmed that he started the fire and that the suspect and victim are both dead, however, we will carry on investigation as the case is of domestic violence."

The deceased woman is in her 20s and has been identified as Fa'aselega Vailoaloa Tuna from Iva, Faasaleleaga Savaii and Sala'ilua, according to a family member of the gas station owner.

She was married to the man who killed her and she does not have any children.

The owner of the gas station is a senior member of the Church of Jesus Christ of Latter-day Saints (L.D.S.), LDS stake President Lake Ah Chong, and his wife Bella Devoe.

The shocked couple were at the crime scene on Saturday with Mr Ah Chong, when asked to comment, saying "it's very sad".

Asked to confirm if the deceased woman stayed with his family at Lotopa, he hesitated before saying: "I just don't want to talk about it, I don't even want to think about it."

It is understood the deceased woman was one of two employees – both female – and she worked for about three years before her death.

Mr Ah Chong said he was impressed with the prompt response by the F.E.S.A. officials.

"The best part about this was the first respondents, they were very quick. I didn't even know there was a fire on my way here, I only saw the smoke when I got closer," he said.

The gas station's other female worker was at work when the tragedy occured.

F.E.S.A. Deputy Commissioner, Tanuvasa Petone Mauga, told Samoa Observer that the deceased man's body was found in the Anglican Church compound, next to the gas station.

He said fortunately the fire did not spread to the next building where liquefied cooking gas cylinders were stored.

The relatives of the deceased woman showed up at the scene, some time after the incident, crying.

Tanuvasa appealed to the public again to "do the right thing first instead of trying to put it online", in reference to a number of Facebook posts that were made on the incident.

"As I said, we are trying to collect as much information as we can, but it seems the fire started from the back where the office is at," he said.

Videos of the incident have gone viral on social media and were mainly taken by members of the public, who were driving past the gas station, when the crime occured after 12pm on Saturday. The footage showed the lifeless body of the young woman in front of Ligaliga Funeral Service premises while the gas station was on fire.

The F.E.S.A. Deputy Commissioner said if the fire had not been contained earlier, it would have spread to the Ligaliga Funeral Service premises, given the wind direction and the age of the building.