Young Pacific climate activists should use the courts to further their campaigns to achieve climate justice, legal experts have counselled them.

A room full of youth activists on Friday during the Convention on the Rights of the Child session in Samoa on Friday were briefed on the power to pursue change through the judicial branch.

A dozen youth activists from across Samoa, American Samoa and the Solomon Islands gathered to hear examples of young people taking on their Governments or private entities in court.

Supreme Court Judge Robyn Layton, who has expertise in working with children in court, said because children are more affected by climate change - both its present and looming impacts - they are entitled to make the case that their rights have been violated.

In the first instance, she said writing to Governments or using social media can also be a way to advocate on environmental issues.

“But then if there is no response to those things, the next step is we want to take this to the courts, because we have the right to live, the right to economic resilience, the right to protecting ourselves and future children,” she said.

“So we go to the courts and we say we want to remedy this.”

One of the earliest examples of children taking their Governments to court is a 30-year-old case in the Philippines, known as Oposa vs Factoran.

It resulted in a landmark decision that recognised Intergenerational Responsibility on the environment, that environmental damage was harmful not only to them, but to children in the future.

In 1993, 30 children filed a claim against the Ministry of Environment, who had approved more timber licenses than there was available timber in the country.

The children claimed this violated their rights to a healthy environment; the Supreme Court agreed. That case has been used as legal precedent worldover and continues to influence environmental law.

Justice Layton said for children concerned about their future, a legal suit is often a way to take control over something that can otherwise appear too immense to manage.

“I think the children that are here, particularly the youth that are very well versed, they can see something they can do for themselves, for their families and for their future, and that is a very important thing for them to have,” she said.

“It’s something they can get their teeth into.”

A local lawyer, Fiona Ey, whose daughter, Aniva Clarke, has been a climate activist throughout her primary school years, believes Samoan children can take a stand at home too. 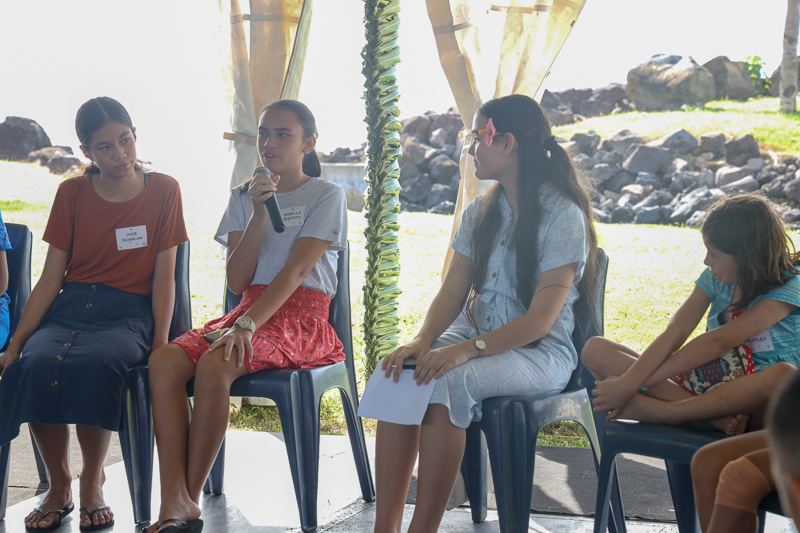 “Our environment is impact by actions of people all around the world, at a big picture level with the impacts of greenhouse gasses, carbon emissions, and actions round the whole world impacting the global environment and particularly small island countries affected by sea level rise, and sea temperature rise,” she said.

“Because Samoa is a party to the Convention on the Rights of the Child and other international human rights treaties there are certainly protections under law for those rights and there are legal grounds for children to be actively trying to enforce protection of those rights, when their environment and their future are being harmed.”

But even locally, children could be making the case that more action needs to be taken to ensure their future exists like it did for the parents.

Nine-year-old Ava Wheatley is a leader of Eco-Toa, the climate change group at Vaiala Beach School.

She told the Samoa Observer that there is still too much plastic in Samoa turning up in the waterways and public parks:

“Chip packets, they are all made of plastic. There are heaps of them in shops!”

“When the Government says let’s do a plastic ban, they don’t really care. We have to give meaning to it and tell them actually what is happening.”

On Friday afternoon, the young activists and other children met with the Committee on the Rights of the Child, who were in Samoa for the Extraordinary Session this week.

Ms. Ey said having that opportunity helped some of the children understand the power they have to demand change.

“Being able to have that access to the highest levels of the United Nations was an amazing opportunity,” she said.

“The input from our young people were extraordinary, I had to fight back tears.”

Last year, the committee received a petition from 16 teenagers from all over the world who claim large polluting countries, who have been opposed to climate action under international agreements, are violating their right to live in a safe environment.

“Those people (the committee) are already thinking about these issues, so having our youth voice their issues directly to them was an amazing opportunity and they really were wonderful.

“They were informed, they were eloquent, and they had presented these issues with such an honestly and simplicity that the committee couldn’t help but be moved.”

One delegate told the room that adults in their life don’t appear to care about their climate change concerns, she added.

“That was a very powerful message and there comes a point where young people do need to use these mechanisms like courts to get the message out there and start making people care.”

Around the world, specially designed environment courts are popping up with the express purpose of dealing with the growing volume of cases like these.

New Zealand’s Environment Court Chief Judge Laurence Newhook came to Samoa to meet the youth activists, and told them he is witnessing a move away from a more austere form of the law to one more forward looking.

“I see the potential for access to environmental justice through the way we are working and hopefully there are improvements coming in legislation.”

The Friday session on climate justice and children was organised by the Asian Development Bank and the Office of the Commission on Human Rights of the United Nations.