The Government travel health advisory issued on Wednesday evening stipulated that the AirBus a320 or Boeing 737-800 are the only aircrafts permitted to fly to and from Samoa.

The advisory did not state the reasons behind the Government's decision to specify the aircraft type but the requirement comes after the Government had reduced flights for all airlines.

Only five flights are permitted for both Samoa Airways and Air New Zealand per week between Samoa and New Zealand.

American Samoa and Samoa flights will be limited to four flights for both Talofa Airways and Samoa Airways per day.

“Airlines are advised to make appropriate changes for flights into Samoa,” the advisory reads.

This means the Air New Zealand flight NZ254 intended for Samoa at 2:05 p.m. is uncertain as it is scheduled to be on aircraft Boeing 777-200, which is now not permitted into the country as per the Government-issued travel advisory.

Out of the last six Air NZ flights from Auckland to Apia, the 787-900 was used three times with the capacity of approximately 300 seats.

From these figures it’s safe to say that Air NZ will lose roughly 500 seats plus freight capacity a week compared to Samoa Airways’ zero loss in seats.

Initially, the Samoa Government issued a special travel advisory saying the Air New Zealand flights were cut in half from six to three flights per week, now there are five flights per week.

Samoa Airways normally operates five flights per week, so there is no reduction in the Samoa Airways flights between Auckland and Apia.

Contacted for a comment, the Air New Zealand spokesperson, Anna Cross told the Samoa Observer that they are "working through these [changes] at the moment and what they mean for Air New Zealand services." 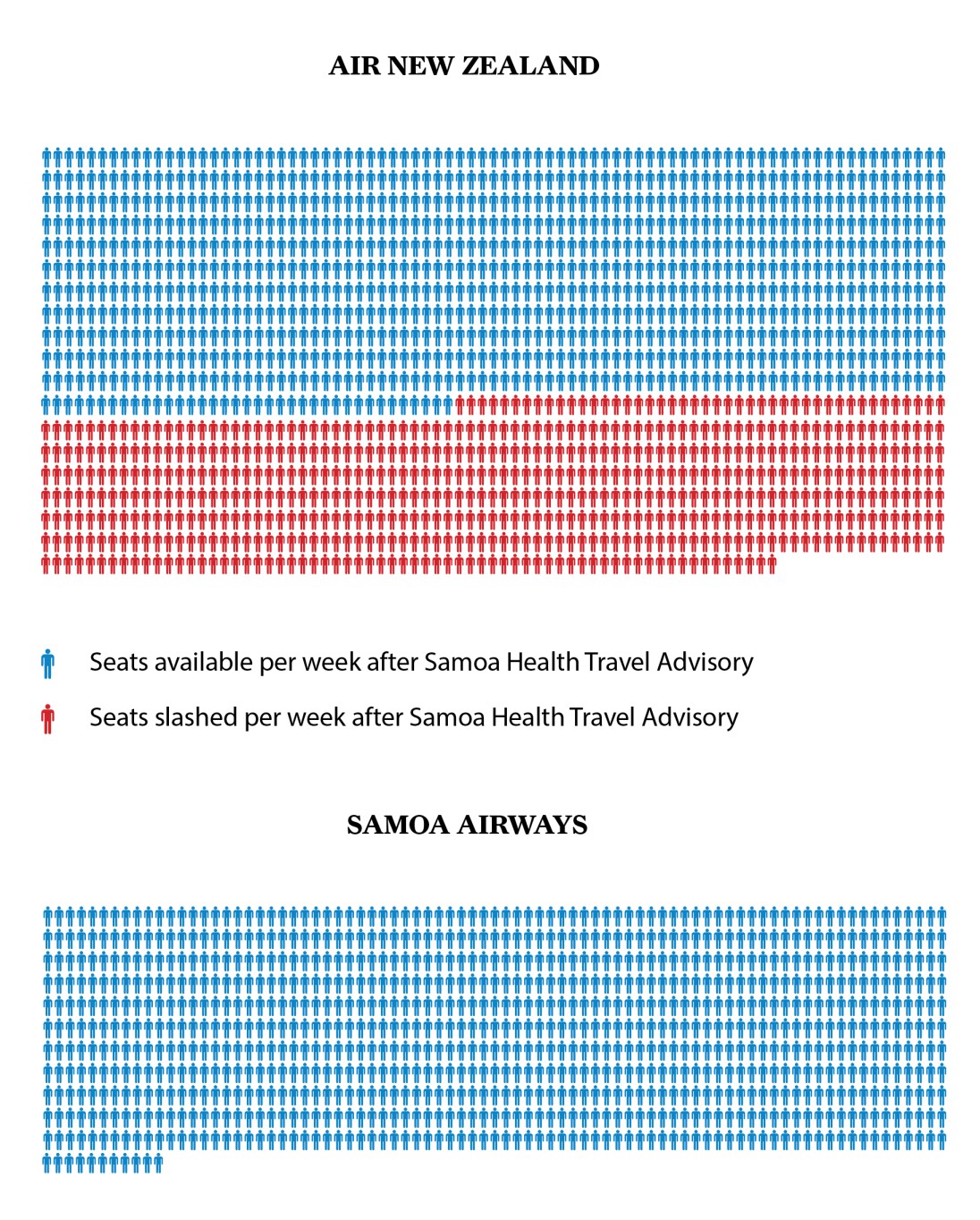 But for businesses around Samoa, some are already experiencing the change in travel advisory requirements impacting their business operations.

Former Polynesian Airline General Manager and businessman, Papalii Grant Percival told the Samoa Observer that poor planning might have been a factor of the travel advisories.

"We need to determine the demand, has it diminished to that extent? Because what they've done is they've already cut the services three to three and now they've increased it to five-five," he said.

"So I don't think there's any planning on this. What is the intention of Government?

"We do not know what their intention is but the rationale to me is to ensure that the equal amount of seats are available for the traveling public."

Papalii foresees that the slash in the frequency of flights increases economic harm and continues to keep the tourism industry at a disadvantage.

"If the Government restricts the number of seats coming in, people can't come in. It will kill tourism, [and] it will make sure that it is on the ground," he said.

"Because you cannot do that, you cannot say to the tourists overseas that they have to fly on a different carrier. Loyalty programmes are set up for one reason only, to create loyalty.

"[...] I can tell you right now that if the[re] were full bookings for Air New Zealand for the larger plane, they're going to have real trouble accommodating this latest demand because it is quite a big drop."

Papali'i admitted that he had shut down production in his business as his equipment broke down and it needed a part which needs to be air freighted into Samoa. But because of the new travel advisory, he will not be able to get it in because it cannot be freighted using smaller aircraft.

Meanwhile, Fiji Airways is scrambling to readjust flights and re-book stranded travelers on the next available service to Samoa.

Maluseu Doris Tulifau is one of many passengers currently stuck in Fiji after their Fiji Airways flight on Wednesday was cancelled and rescheduled to Monday.

Maluseu said the changes in travel advisories is costing them extra for medical examination reports, which has already seen her foot $200 intended for their arrival on Wednesday.

An extra $200 will now be charged on the stranded travelers as their already-issued medical clearance report would be invalid by the time they travel next Monday.

"I just wonder about people who can't afford to do this," said Maluseu.

"It costs $200 something to get medical clearance. How do they think everyone can afford it?" she asked.

Despite the difficulties encountered, Maluseu commended Fiji Airways for their great services while they are in Fiji.

Initial changes to incoming flight schedules to Samoa were made a day after New Zealand confirmed their first coronavirus case.