Past due loans at the Development Bank of Samoa more than doubled to reach $13.2 million in the 2018-19 Financial Year as the beleaguered state-owned Bank struggles for financial viability.

The new figures, which cover the gross number of loans more than 30 days overdue, are contained within an unpublished Development Bank of Samoa (D.B.S.) annual tabled before Parliament.

The bank has also undergone a major surge in the number of “non-accrual” loans on its balance sheet, or loans about which the bank has reasonable doubts that the principal or interest will ever be recovered.

The report also expressed concern over interference by Cabinet to prevent the bank from foreclosing on hotels that had not paid their bills last year.

“The intervention to postpone sale of hotels has placed the D.B.S. in a very challenging position,” the report reads.

“The sustainability has become an issue that should be accorded urgent attention.”

In May, the Cabinet stopped the D.B.S. from taking legal action and seizing the assets of at least eight tourism properties.

The report paints a candid picture of a bank aware of “material uncertainties” that could affect its ability to survive as a business.

“Uncertainty represents 21 per cent of the loan portfolio that are not generating the expected repayments to cover long term liabilities,” the report concludes. 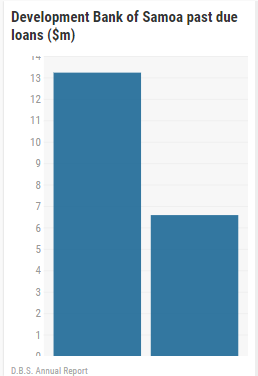 The report’s tabling before Parliament comes months after a review by the Asian Development Bank found that the D.B.S. on its current trajectory “cannot operate sustainably".

Emails to the Bank’s C.E.O., Susana Laulu, were not answered as of press time.

The report indicates the D.B.S. operation is heavily reliant on cash flow and the health of the tourism sector:

“The lending operation is primarily funded from external debt. The risk exposure is concentrated in [the] tourism sector holding 66 per cent of the portfolio.

“The loan repayment is irregular or none received from large [non-performing loan] accounts. This has greatly affected the adequacy of cash flow to sustain operation and meet debt obligations.

At the time Minister of Tourism, Sala Fata Pinati, spoke to the Samoa Observer about the industry’s predicament.

The Minister wouldn’t identify which hotels he was referring to.

He said the consequences (of these hotels being closed) far outweigh the amount of the loans.

“We are not saying the hoteliers’ loans will be written off,” the Minister added.

“No they will pay their loans for the time being, and make up [for] the missing payments. The Cabinet is more concerned [about] the ripple effect.”

But the Chairman of the D.B.S. board, Leasiosiofaasisina Oscar Malielegaoi, noted the Bank’s total loan collection for the Financial Year was $20.37 million compared to its budget of $17.5 million.

“[The previous Financial Year’s collection] was $18.5 million. The increase is due to settlement and sale of assets for loan accounts foreclosure for recovery,” he said in a foreword to the report.

“The budget value approved was $6.3 million resulting in an increase of 40 percent.

“Of the total loan approval 54 percent represents agriculture and fishing, 45 percent to industry other business and services and the balance to inclusive development.”

“The D.B.S. financial performance has been significantly affected by ongoing measures to manage loan balance accumulation and decisions that delayed recovery proceedings.”

The Minister of Finance, Sili Epa Tuioti pledged to review the state-owned bank's strategy and to encourage large corporations to seek financing from large corporate banks rather than the D.B.S.

Sili said a collaboration between D.B.S., the A.D.B., International Finance Corporation (I.F.C.) and his Ministry has started to look at different models to improve the performance of D.B.S. as Samoa needs a development bank.

The Bank's mission is “to promote the expansion of the economy of Samoa for the economic and social advancement of the people of Samoa.”