Farmers and fishers to benefit from S.A.F.P.R.O.M. project. (Photo: Vaitogi A. Matafeo)

Local farmers and fishers will benefit from a US$23.55 million project to increase productivity of and access to markets of Samoan agricultural and fisheries products that will be launched this week.

The announcement was made by the Minister of Agriculture and Fisheries (M.A.F.), Lopaoo Natanielu Mua in a press conference on Tuesday. 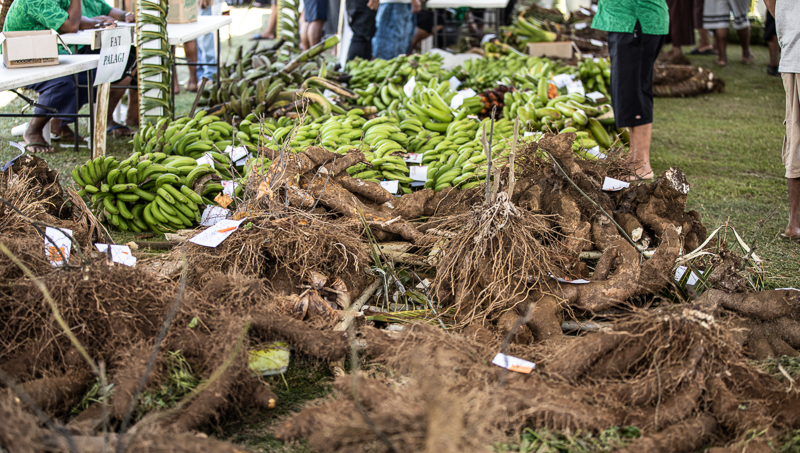 “The Samoa Agriculture and Fisheries Productivity and Marketing (S.A.F.P.R.O.M.) Project will be launched on the 5th of March, 2020 at the Apita o Pisaga Hall in Savaii,” he said.

Lopaoo said that the total project cost is US $23.55million.

The project will be implemented over five years by the M.A.F. with assistance from the Samoa Business Hub and the Samoa Development Bank on the Matching Grant Program, and from the Ministry of Finance on the Contingency Emergency Response Component.

“The project will be co-funded by the World Bank [US$19.95m] and the International Fund for Agriculture Development (I.F.A.D.) [US$3.6m].

“One of the eligibility requirements is that an applicant must have a plantation which will be assessed by our ministry and we will not be fooled by a plantation that was just put together in a short period of time.

“In terms of assistance the applicant pays half the amount of the total cost of the project while the other half is paid through the project.”

He added that the S.A.F.P.R.O.M. project continues the work of the Samoa Agriculture Competitiveness Enhancement Project (S.A.C.E.P.).

“S.A.C.E.P. did not include fisheries but thanks to S.A.F.P.R.O.M. the fisheries side will also get funding assistance.

“Part of the project will construct a building to better prepare goods for exports overseas in Savaii.

“Another benefit which was requested under the project was fixing five roads for some villages in Savaii because of the inaccessibility to some of their farms.”

A representative from World Bank, Thanh Son Vo said that S.A.F.P.R.O.M. is continuing on the strong foundations that S.A.C.E.P. has developed.

“We hope that S.A.F.P.R.O.M. will continue to contribute to the betterment of the livelihood of farmers and fishers in Samoa.

A representative from I.F.A.D., Tawfiq El-Zabri, Country Programme Manager for Asia and Pacific said that the S.A.F.P.R.O.M. project is their first investment project in Samoa since the 90s and Samoa was a founding member of I.F.A.D.

The project consists of four main components: component one looks at Strengthening National Institutions and its main aim is to create an enabling environment for increased productivity and access to markets for targeted farming and fishing households and private sector along the targeted value-chains (inputs suppliers, agro-processors, etc.). It will address institutional capacity gaps both within M.A.F. and national producers’ organizations and stakeholders.

The second component focuses on strengthening the performance of selected value-chains specifically to (i) increasing on-farm productivity in fruits and vegetables, tree-crop and livestock farming households who wish to upgrade to semi-commercial status and promoting sustainable fisheries options for fishing households and organizations, and (ii) strengthening linkages between those farming/fishing households and other value-chain actors, including input suppliers, agro-processors and traders.

The third component will focus on the establishment of the Agriculture Sector Coordination Division within M.A.F. to coordinate not only the S.A.F.P.R.O.M. project but all development projects for the sector.   Component four is the Contingency Emergency Response that will allow the Government to reallocate resources to meet priority sector needs in case of a natural disaster.

During the launch, M.A.F. will be utilizing the opportunity for wider consultations with farmers and fishers regarding the project and its processes.

The S.A.C.E.P. project was mandated to support fruit and vegetable growers and livestock producers to improve their productivity and take greater advantage of market opportunities.