The ceremony took place at the Head of State’s residence at Vailele. 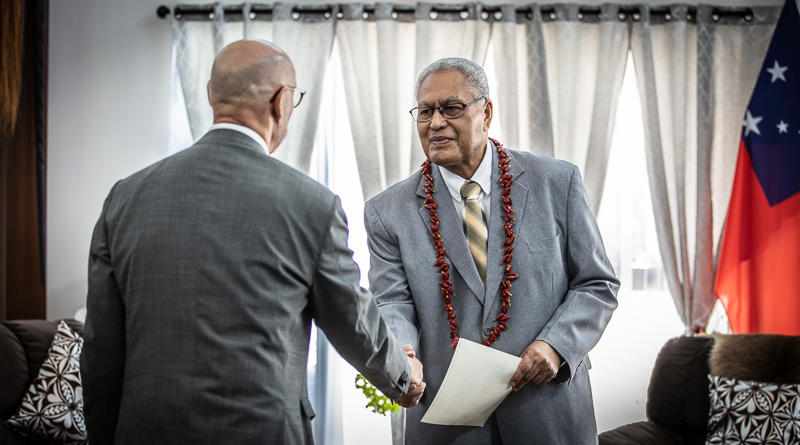 Mr. Winzap said that both Samoa and Switzerland are small nations, attached to their independence.

“Even though separated by geography, Samoa and Switzerland have much in common,” he said.

He said Samoa and Switzerland have a commitment to democracy and traditions, the endeavor to render our small nations useful in the search for peace, and the respect for human rights.

“Both our nations are, in different way, blessed by natural beauty. The preservation of nature is therefore among our common priorities. Small nations cannot rely on their limited power alone.”

The Switzerland Ambassador added that a strong international system of cooperation, based on the rule of law is essential to their well-being.

“Switzerland is therefore assisting Samoa in establishing a Permanent Mission in Geneva.

“This Swiss city hosts the European seat of the United Nations as well as the World Trade Organisation which your country has joined a few years ago.

“Together with Consul General Sylvia Salanoa, a Swiss national living in Apia, we will continue to realise projects that are of direct benefit to your people.”

A number of Swiss citizens have made Samoa their permanent home, according to the Ambassador.

His Highness Tuimalealiifano extended his sincere thanks to Mr. Winzap for presenting the Letter of Recall for his predecessor.

He also conveyed his warmest wishes and greetings to President Simonetta Sommaruga and the Honorable Members of the Swiss Federal Council.

“We pursue multilateral and shared common interests on international relations at the United Nations, including our continuous stewardship towards the protection of human rights, freedom and upholding the values and principles of democracy.

“Samoa recognizes the goodwill assistance of your government through regional projects on Climate Risk and Early Warning Systems for capacity building of technical officials and infrastructural support in combating the impacts of climate change.”

He added that Samoa and the rest of the Pacific are experiencing extreme climates that pose great danger to livelihoods, and the need for community awareness and preparedness before and during disaster remain an urgent priority.

“Geneva has been a great host to multiple government officials and ministerial visits from Samoa.

“It was a pivotal hub in our eventful journey of negotiations towards our accession into the World Trade Organization on May 2012 and still is an important city in fulfilling Samoa’s responsibilities in global trade.

“I welcome with appreciation the support and reception of the Swiss Government on our preparatory work with the establishment of our resident Mission in Geneva. This is a major step in strengthening our bilateral relation and a doorway of opportunities for both our people.”

Tuimalealiifano also commended the presence of the Swiss Ambassador which is a special occasion for both countries.

“It is a milestone in your tenure as Swiss Ambassador to Samoa and for the many Swiss nationals that have made and called Samoa their home.

“I am certain in your discussions with your fellow compatriots, you will bring back fond memories of the beautiful Swiss landscape and nature you have alluded to and the taste of renowned Swiss confectionery.

“I wish you well in undertaking your solemn roles to strengthen our friendly relations and I hope you will have an enjoyable time with your wife while in Samoa.”

Mr. Winzap was born in Falera, canton of Grison, Switzerland in 1957. He attended Concordia University, Montreal in Canada and graduated with a degree in Political Science.

In December 2018 the Swiss Federal Council appointed Mr. Winzap as the Ambassador of Switzerland to New Zealand accredited to other Pacific Islands including the Independent State of Samoa.