Samoa out of L.A. Sevens quarterfinals after two losses.

The two losses mean Samoa will miss out on the Cup quarterfinals for the fourth Series leg in a row, regardless of their result against Scotland in their final Pool C match at 5:35 pm Samoan time.

The 19-17 loss to U.S.A. was a replay of last year’s Las Vegas Sevens Cup final, and was a fittingly tight encounter with Samoa opening the scoring. 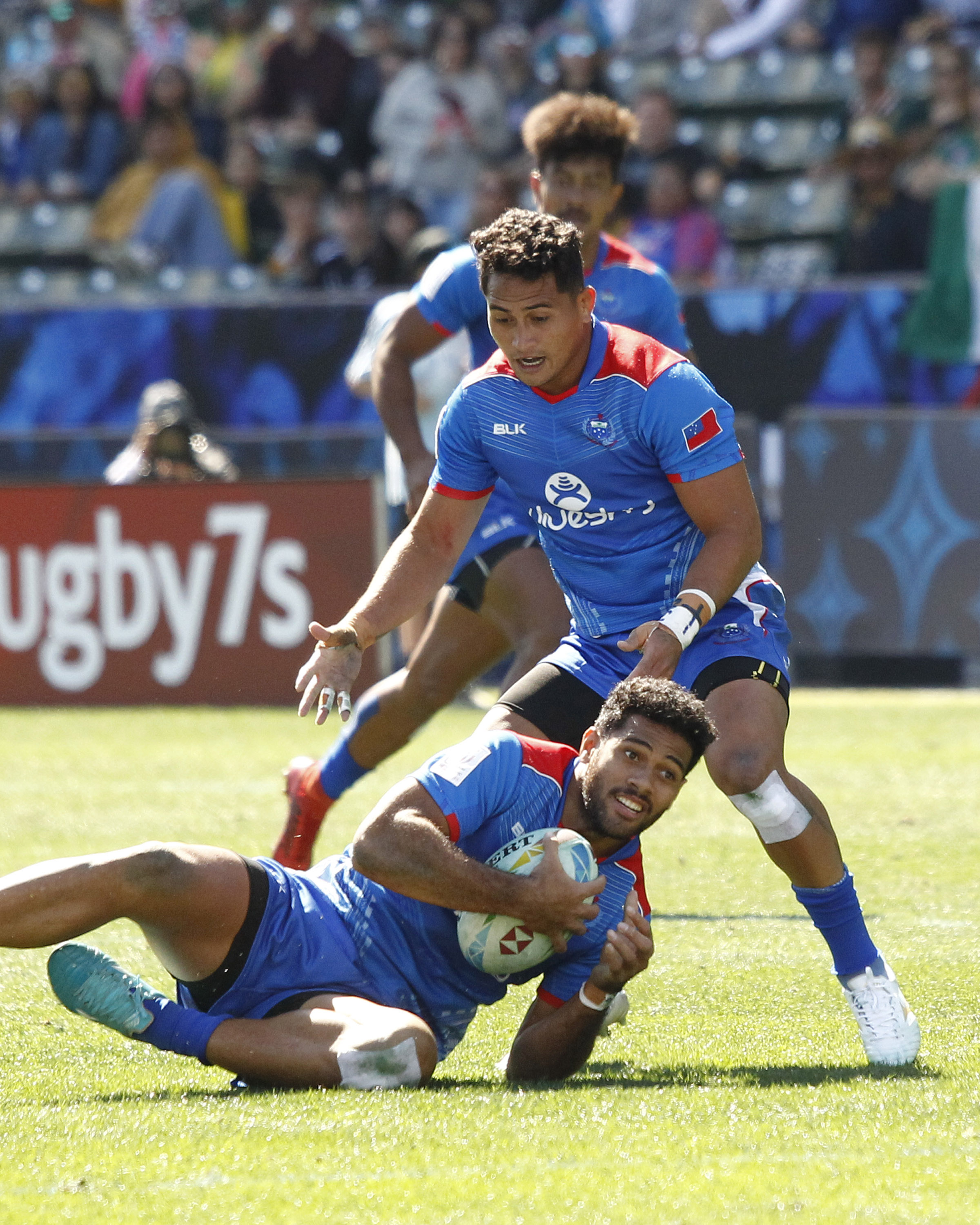 Back-to-back penalties put the Manu on the attack early, then Elisapeta Alofipo drew a couple of defenders and offloaded to Tomasi Alosio for the skipper to get the first try of the game.

The U.S.A.’s discipline continued to plague them as they were pinged for the tackler not rolling away soon after, and Samoa had a lineout short of halfway.

There was a bit of luck for Samoa when their wonky throw wasn’t picked up by the referee, and Joe Perez took advantage with a clean runaway try to make it 12-0 in the fifth minute.

The home side responded immediately though, as Martin Iosefo made a big break from kickoff and Steve Tomasin went in to score from the next phase.

U.S.A. marched straight up the field again when Perry Baker recovered their kickoff, and Danny Barrett found Ben Pinkelman with a beautiful offload to tie the game at 12 heading into halftime. 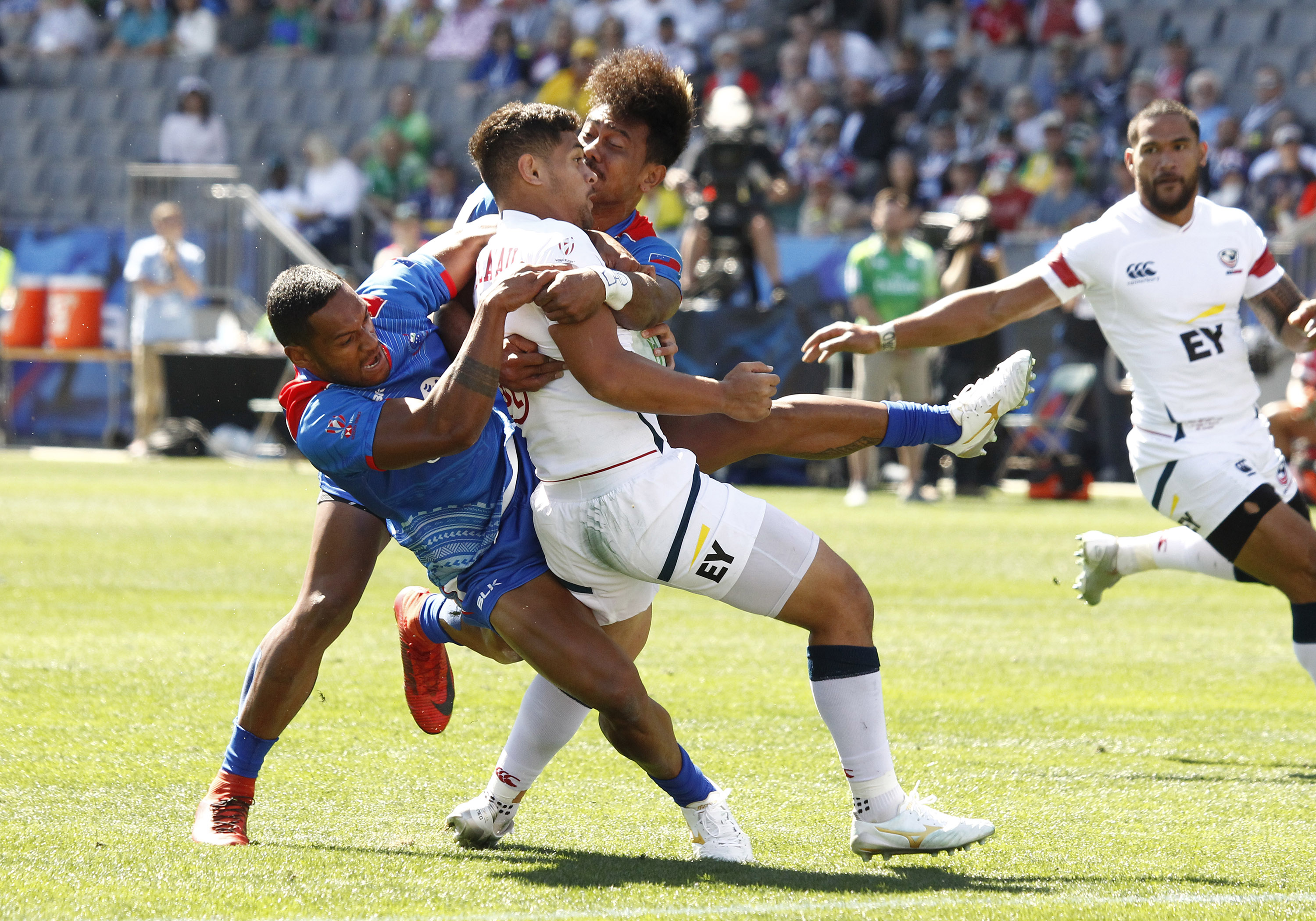 Whether by design or otherwise, Samoa put multiple grubber kicks in behind the U.S.A. line in the second half, to mixed success.

The tactic came off early when an Elisapeta Alofipo kick and chase got the Manu 7s into the 22, and he was able to score a try on the next phase with the U.S.A. defence scrambling.

Joe Perez tried his own kick in behind when Samoa got the ball back, but couldn’t recover and was made to pay. 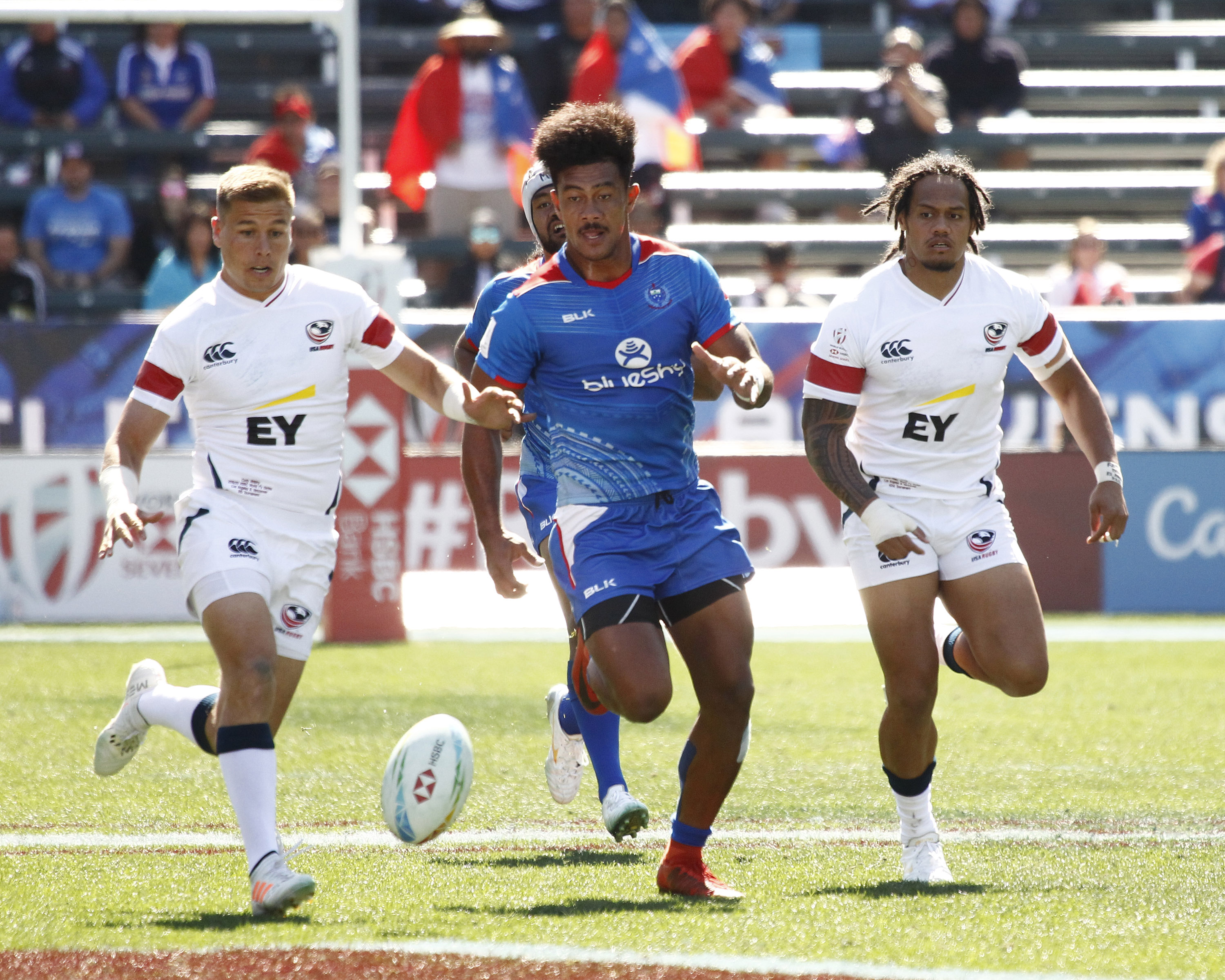 The U.S.A. countered quickly through the rapid Carlin Isles, who scored his 200th World Series try at the other end to give the hosts their first lead of the game in the 11th minute.

Laaloi Leilua put in a grubber kick for Samoa, and got the ball back to take the Manu over halfway.

But he knocked on in trying to do it again a couple of phases later, and the U.S.A. were able to keep possession and wind down the final couple minutes of the match. 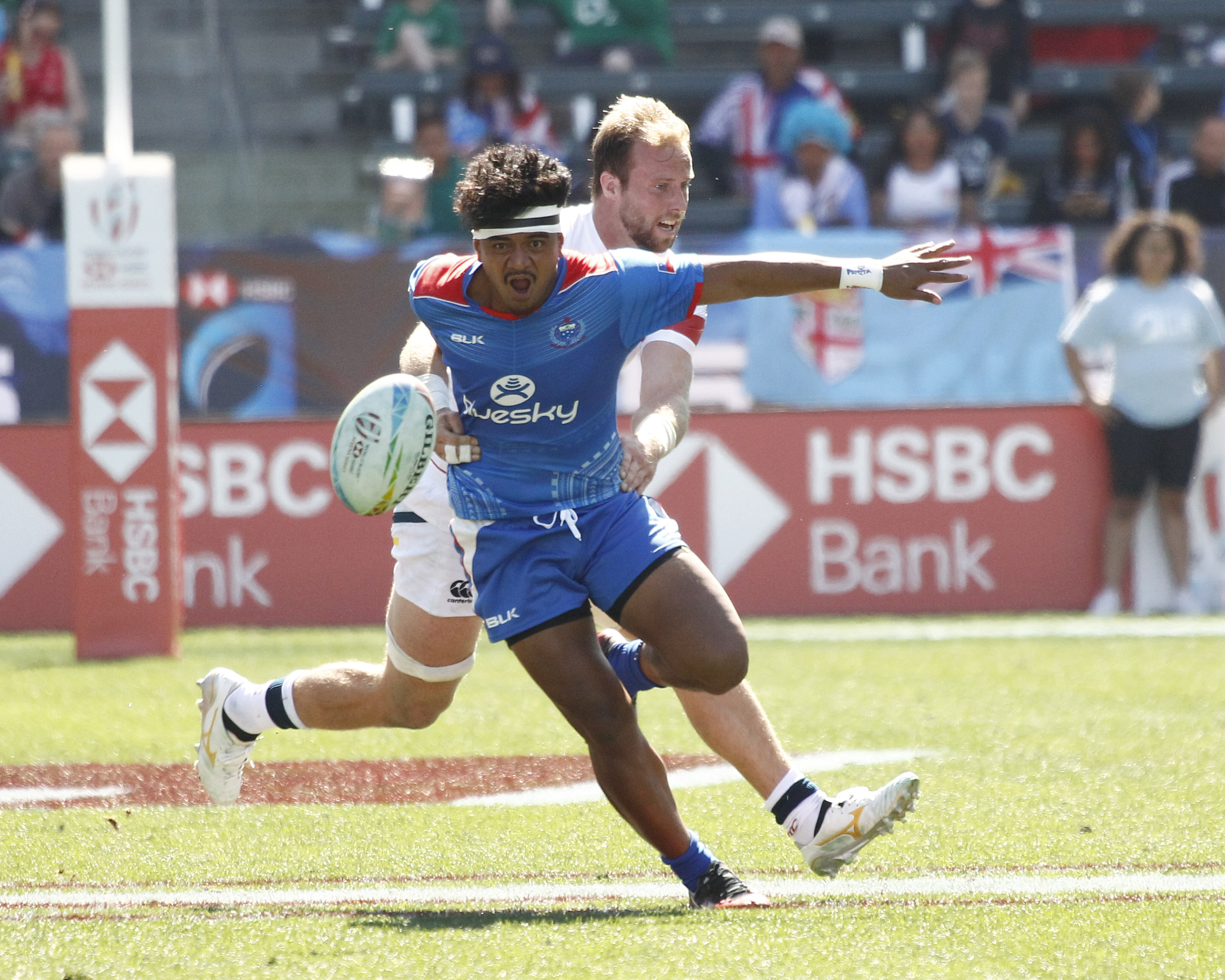 In Samoa's second match, Australia were able to monopolise possession in a 31-5 win.

The Wallabies recovered their own kickoff and kept the ball well, working their way up into the 22.

Lachie Anderson drove to the tryline through three defenders, but Melani Matavao was able to knock the ball loose for Samoa to concede a five-metre attacking scrum.

Lachie Miller then stepped around some poor defence from Losi Filipo and Joe Perez to score an easy try in the second minute.

Australia recovered the kickoff again, and Elisapeta Alofipo did well to force Trae Williams out of play before he could get to the tryline.

But Williams was in soon after to double Australia's lead.

Alofipo replied with his own try just before halftime to keep Samoa in it at 14-5, but the game would slip away from his side after the break. 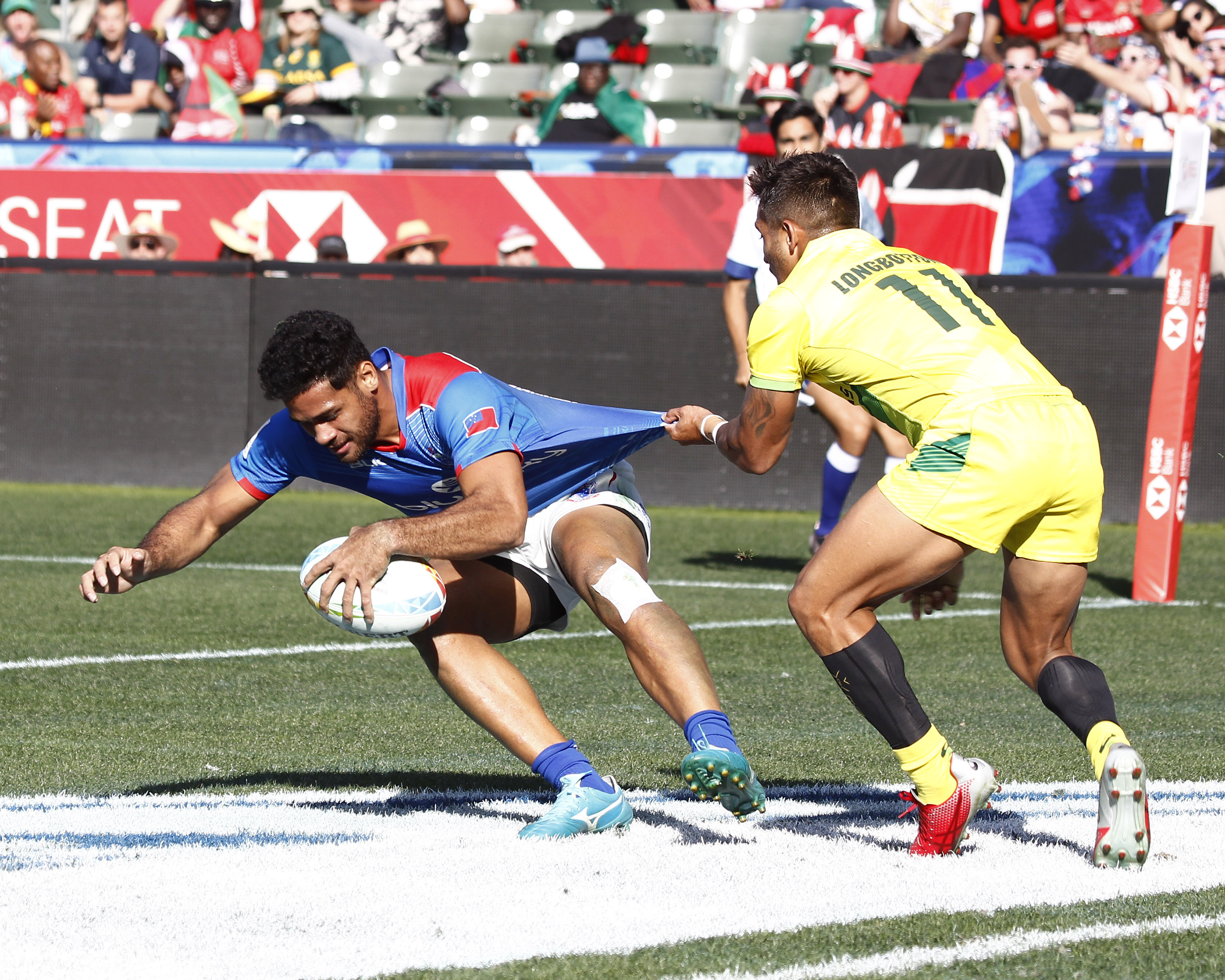 Australia went through plenty of phases as the advanced into the 22 with side-to-side passing.

Lachie Miller again created some space with his stepping, before they went wide to Rodney Davies to extend the lead to 16 in the ninth minute of play. 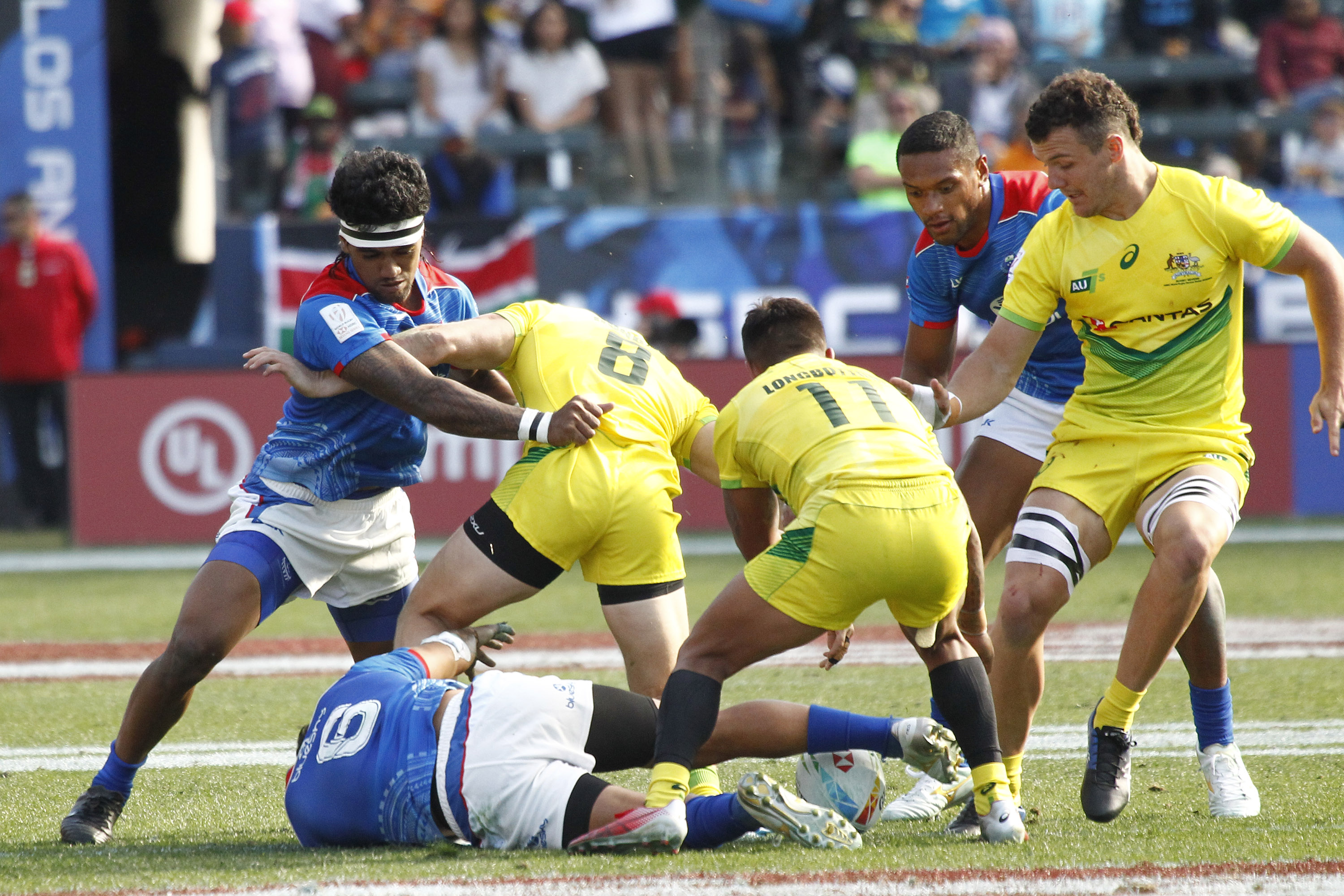 A Losi Filipo knock on near the defensive 22-metre line denied Samoa the chance at some rare possession, and Australia made them pay with a try in the corner to Henry Hutchison.

And with time up on the clock Stuart Dunbar scored to complete the rout.