The trial of two men accused over the death of Jeremiah Malaki Tauiliili started in the Supreme Court on Monday morning.

Herman Westerlund and Suapaina Savai’inaea are facing charges of reckless intent in committing the murder of Malaki Tauilili in December 2018 at the Edge Marina venue at Matautu.

Presided over by Justice Mata Keli Tuatagaloa, the men have entered a not guilty plea to the charges. They are also facing an alternative charge of manslaughter.

The prosecution is expected to call more than 30 witnesses during the trial.

In opening the prosecution’s case, Silupe briefly touched on the charges against the men. 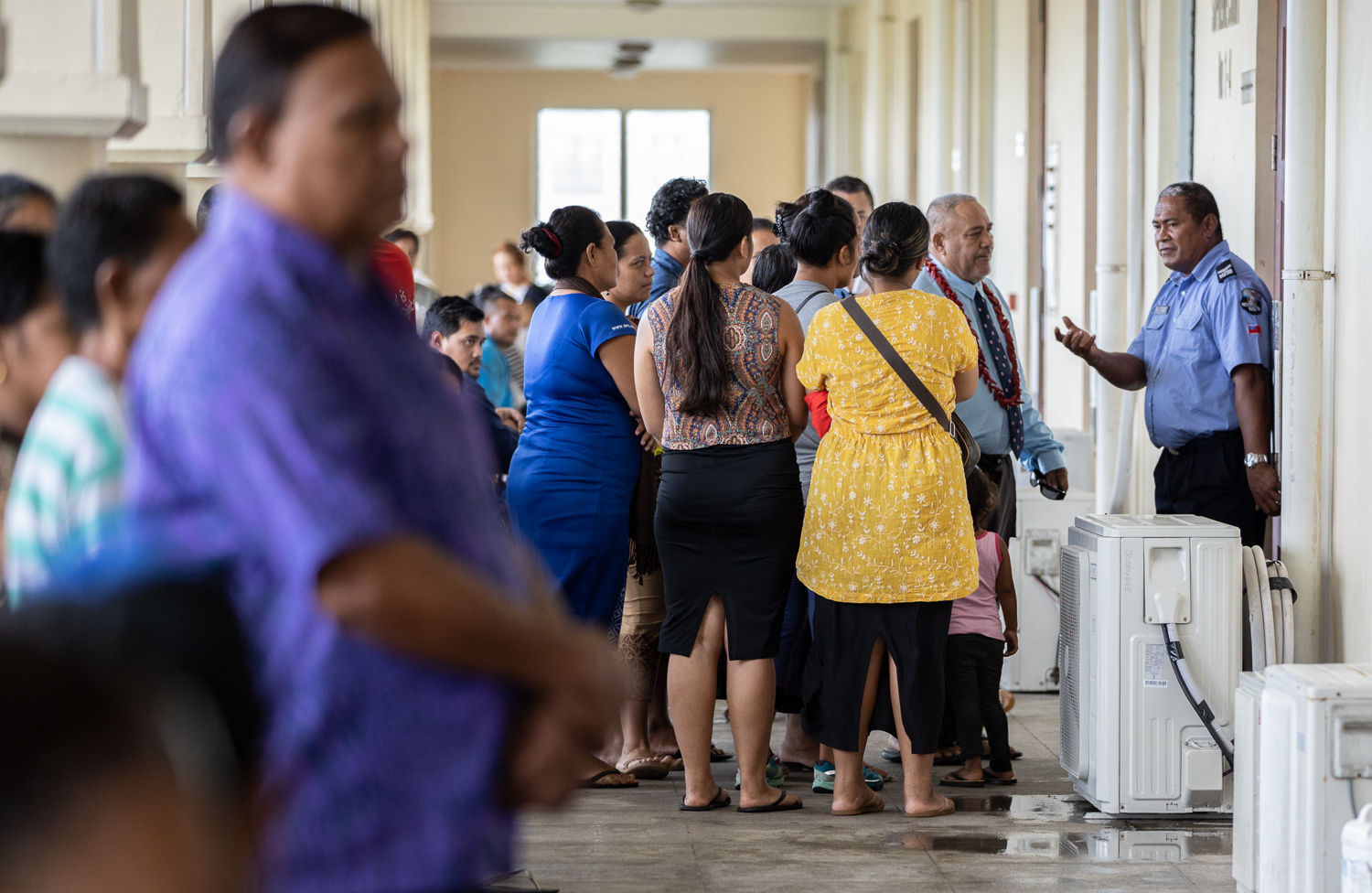 “On the evening of 30th November to the early morning 1st December 2018 both defendants had consecutively assaulted the deceased, Malaki Jeremiah Tauiliili,” she said.

“The defendants’ individual [assaults] were in very close proximity to each other, in time and in nature while the deceased was vulnerable.

“Evidence will show that the deceased never woke up or regained consciousness after the assault at the Marina and passed away on 5 December 2018 at Motootua hospital.”

Silupe said it is the prosecution’s case that each defendant’s alleged assault resulted in the "reckless intent to commit murder.”

She added that, should the Judge find that there was no reckless intent amounting to murder, the prosecution submits that the substantial impact of both assaults caused the death of the deceased, consequently committing alternative offences of manslaughter.

One of the first witnesses called on Monday was Puleiata Samuelu, who arrived at the Marina sometime around 11.30pm with a group of friends. He went to the Marina Glass Lounge with several other friends and four ladies whom he did not know their names.

The 28-year-old of Lotopa recalled Westerlund and others trying to pull back Malaki. 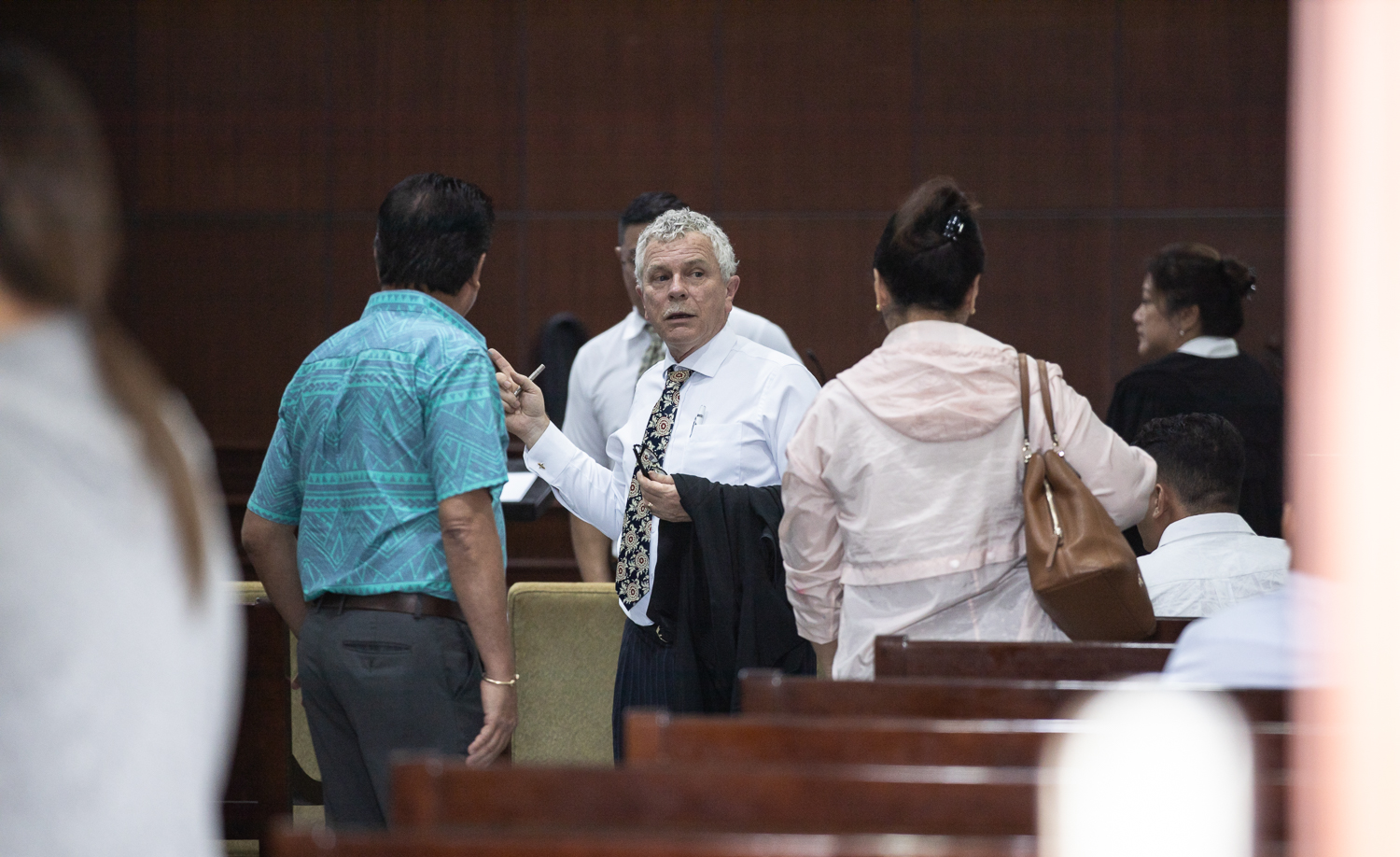 They were said to have been standing on the opposite side of the commotion inside the lounge.

“I saw Herman punching Malaki and they fell down,” said Samuelu.  “Malaki fell down first and people could hear the sound of his head hitting the floor and Herman fell beside him.

“Malaki was unconscious and Herman got up and sat on Malaki’s chest and threw more than one punch.”

The witness said while the deceased was lying on the floor without moving, other boys whom he could not identify, pulled Westerlund outside.

According to the witness, while the deceased was still on the floor, a man who stood by the bar walked up and kicked Malaki on the head. He demonstrated how Savai’inaea kicked the head of the deceased, who remained still.

Asked what happened while the accused kicked the deceased on the head, Samuelu said that he remained unconscious.

The witness testified that Savai’inaea then walked out and a person by the name of Paratiso placed the deceased on his side and tried to open his mouth.

“When he did that, I could hear Malaki snoring,” he said. “Then I knew that he was still alive. His eyes were still closed.”

It wasn’t long after that the ambulance arrived and took Malaki to the hospital. 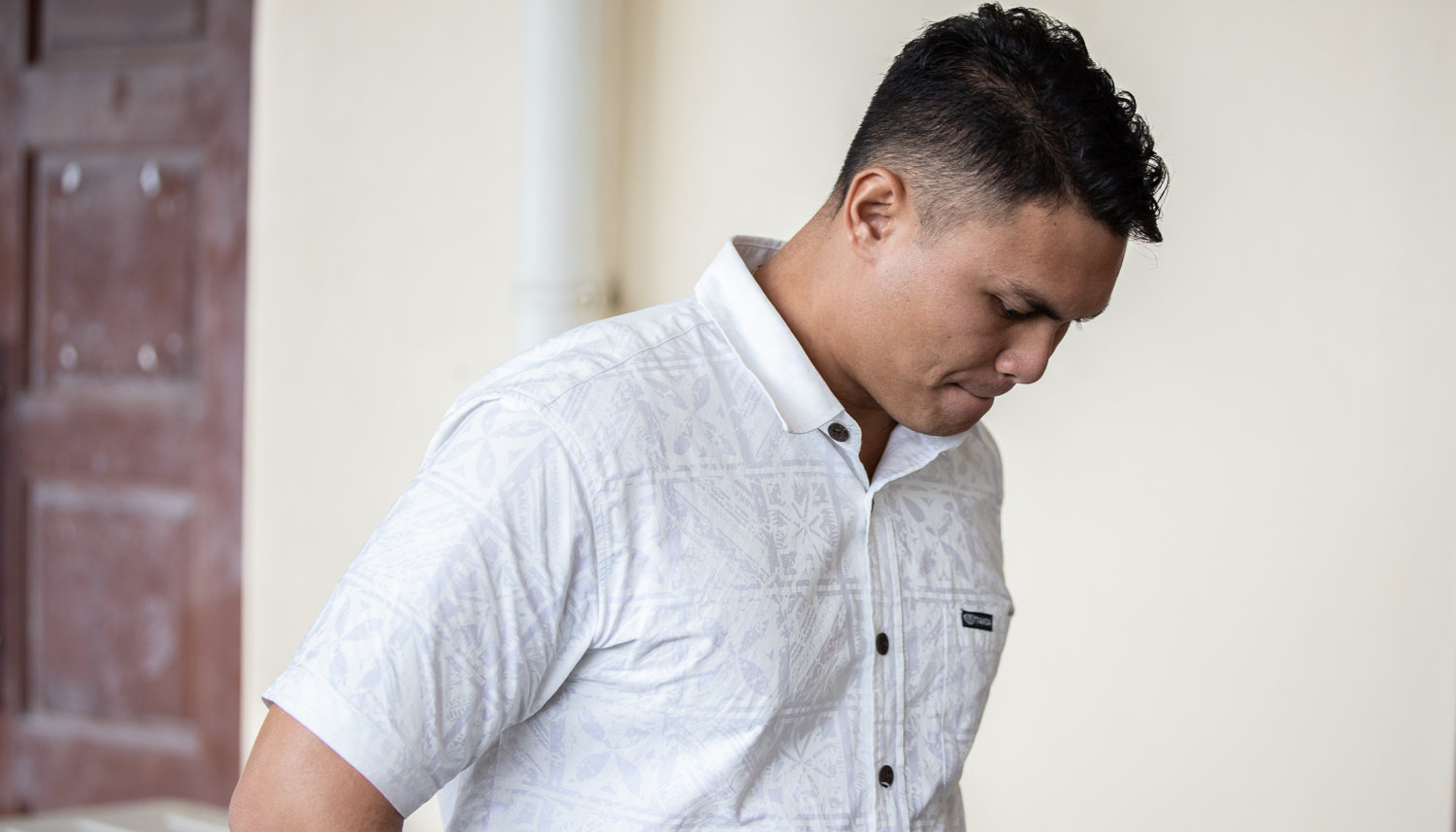 Samuelu was then shown a video of what happened earlier on the night of the incident.

During cross examination, Queens Counsel Perkins asked the witness if he had seen Rob Ash on the night in question. The lawyer put it to Samuelu that an earlier incident involving Malaki and Ash was the first sign of trouble and that Westerlund was trying to pull the deceased to the opposite direction.

“It was clear that Malaki was shouting at someone else and Herman had his hands wrapped around his neck,” asked the defense lawyer.

In response, Samuelu said he was not aware of whom the deceased was shouting at but it was clear he was angry and he wanted to fight.

The lawyer then put it to the witness that: “Herman was trying to calm down Malaki but it wasn’t working. Malaki was determined to get to the other person then Malaki pushed away Herman and caused Herman to turn his head to the right [side].”

At this point, Mr. Perkins asked the witness if it’s fair to say that the deceased was making it difficult for Westerlund when he just would not calm down. He concurred.

The defence lawyer queried Samuelu if it's possible that it was the deceased’s bottom that hit the floor first before his head. He also suggested to the witness that Westerlund threw only one punch.

But the witness maintained that the deceased fell on his back with his head hitting the floor.

“I saw Herman punching Malaki and they fell on the ground,” Samuelu told the Court.

“Herman then got up on Malaki’s chest and punched him again more than once. I don’t know how many more punches but it was more than one punch.”

The defence lawyer then reminded the witness of an affidavit he signed in 2018, a week after the incident, where he gave a different version of events.

According to the lawyer, in the affidavit, the witness told “the Police that Herman fell [on his side] and sat up and punched Malaki again.

“After that a guy pulled Herman away and you didn’t see him after that again.” 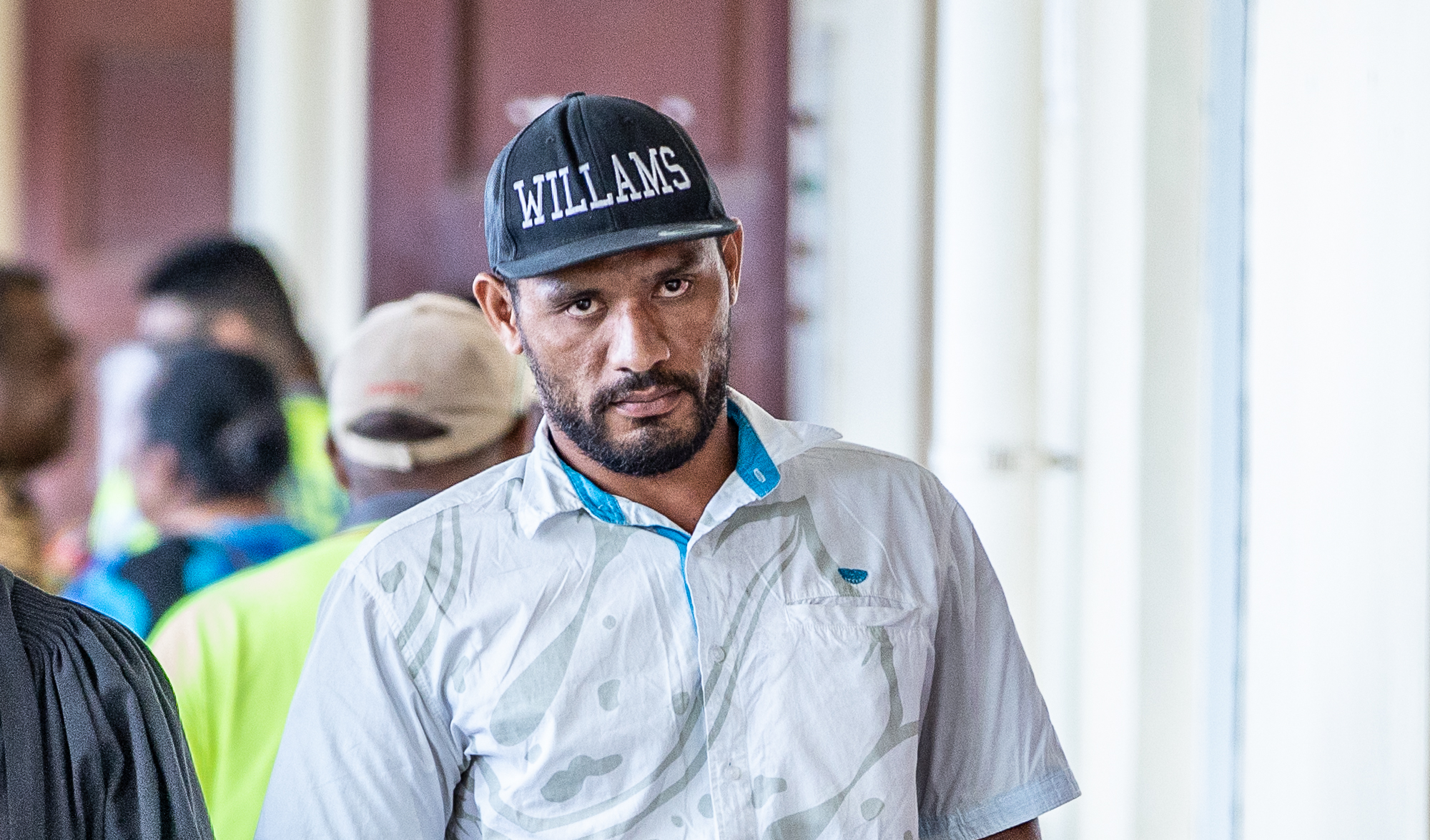 But the witness objected to his affidavit.

He told the lawyer that the Police might have made a mistake and mistyped his statement. He insisted that Westerlund threw more than one punch after he got up from the floor.

The lawyer for Savai’inaea, Leiataualesa, also cross-examined the witness. The counsel asked the witness how many drinks he had on the night at his friend's party and what kind of drinks they were.

The witness said he could not remember but he said he drank alcohol. Leitaualesa put it to the witness that he could not see the person that he claimed kicked the deceased because there were people standing in front of him.

Samuelu said he was able to see the man that came from the bar and kicked the deceased.

Asked which four female friends accompanied him to the Marina on the night in question, the witness said he did not know.

The lawyer then questioned the witness’ selective memory of the incident and the identities of people in attendance.

Leiataualesa asked the witness if it was not true that one of the girls they went out with had been dating his friend.

At this point, the witness said he had thought the lawyer was asking him if he knew the four ladies’ names before the night of the incident.

The lawyer told the Court that questions put to the witness were clear: if he knew the ladies he had referred to, not whether he knew them before or after the incident.

The third witness to give evidence was Vandahlia Chong Wong.

The 27-year-old from Vaitele-fou was one of the four girls that Samuelu had attended the Glass lounge with on the night of the incident.

She remembered that she and a group of friends arrived at the bar sometime after 11.30pm and they were there until midnight.

Ms. Chong Wong said she recalled some people were arguing and she then moved away towards where the television was. She didn't know who was arguing.

“I saw Malaki and Herman walking towards the exit door,” said the witness.  “All I know is Herman was trying to stop Malaki, to calm him down. Herman was leading him [Malaki] to go outside and out of nowhere Herman punched Malaki on his jaw.”

Ms. Chong Wong added the men then fell on the floor.  She explained Malaki landed on his back while Herman fell on his knees.

“Herman then punched Malaki again,” she said. “Malaki wasn’t moving and somebody walked from the bar and kicked Malaki on the head.  His head moved [from the kick] but his body was not responding.”

The first witness in the trial was Police Officer, Toa Tafunai.

The Officer's evidence was in relation to photos he took of the Marina and a plan of the area.

The hearing is continuing.