The win confirms their place in the World Rugby U20 Trophy, to be played in Spain in September. 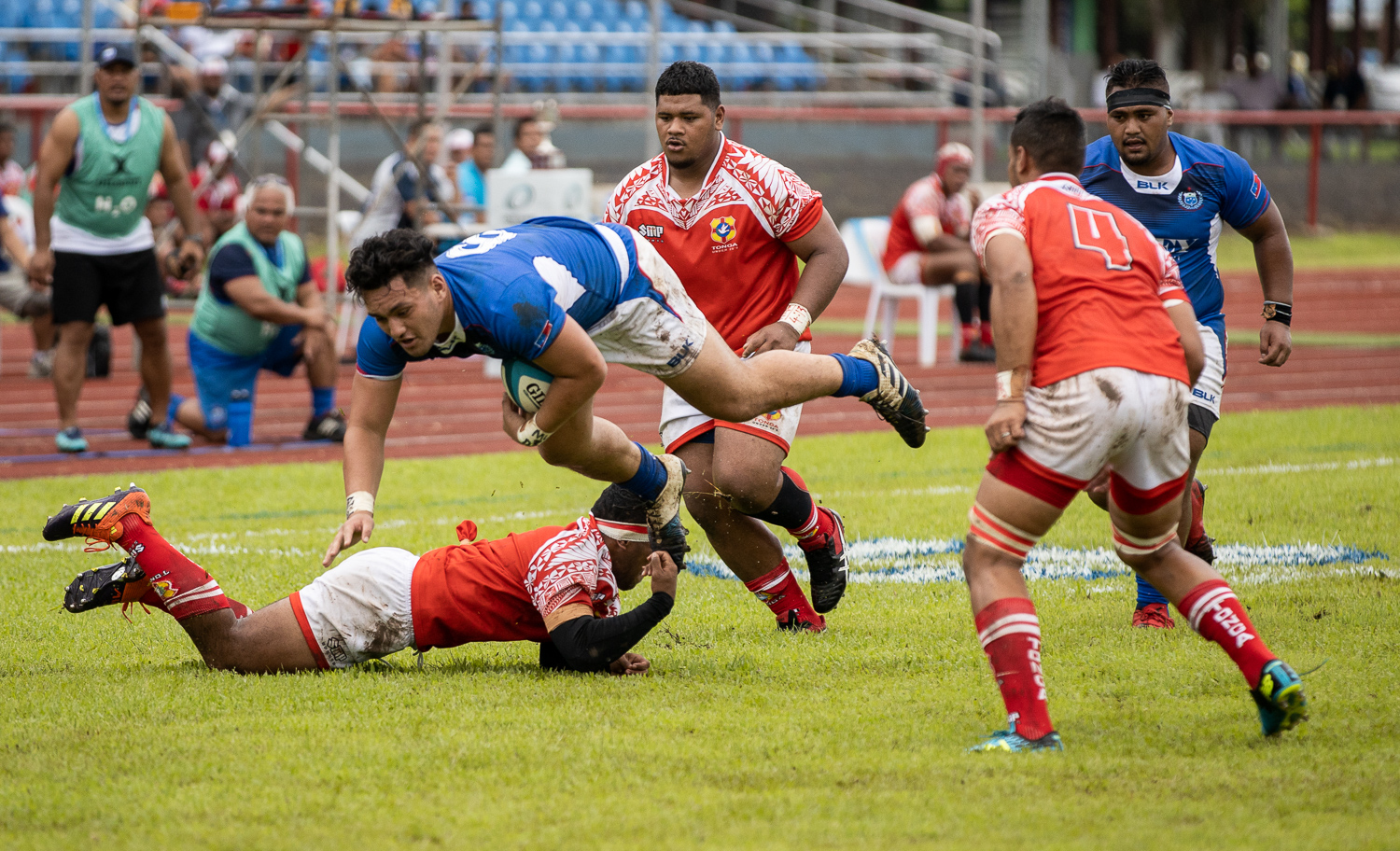 While there was no rain around the kickoff time of 4 pm, the Apia Park pitch looked a little worse for wear thanks to the heavy rain brought on by tropical depressions over the last couple of weeks.

Samoa started the match brightly, with first five Louis Bartley-Saena booting an early penalty over after Tonga were caught offside around the 22 metre line.

The Baby Manu had been expecting their island brothers to bring a typically big and strong forward pack, but it was Samoa that dominated at scrum-time early and throughout the match. 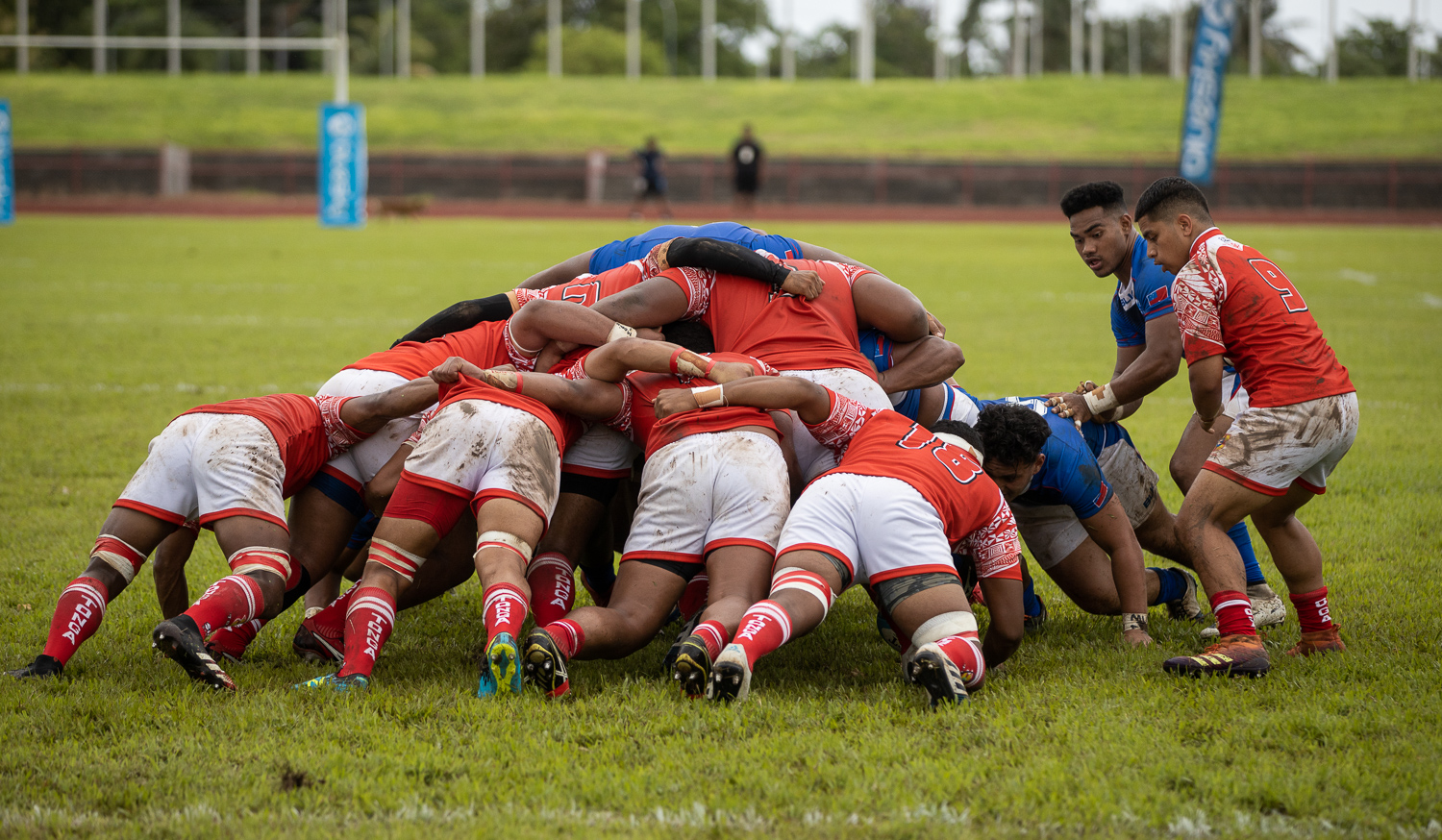 Tevita Asi missed a chance for Tonga to draw level from a penalty, and Samoa soon made them pay by extending the lead.

As the expected rain began to set in, the Baby Manu built some phases nicely, then put the ball through the hands for winger Owen Niue to score the game's first try in the 13th minute. 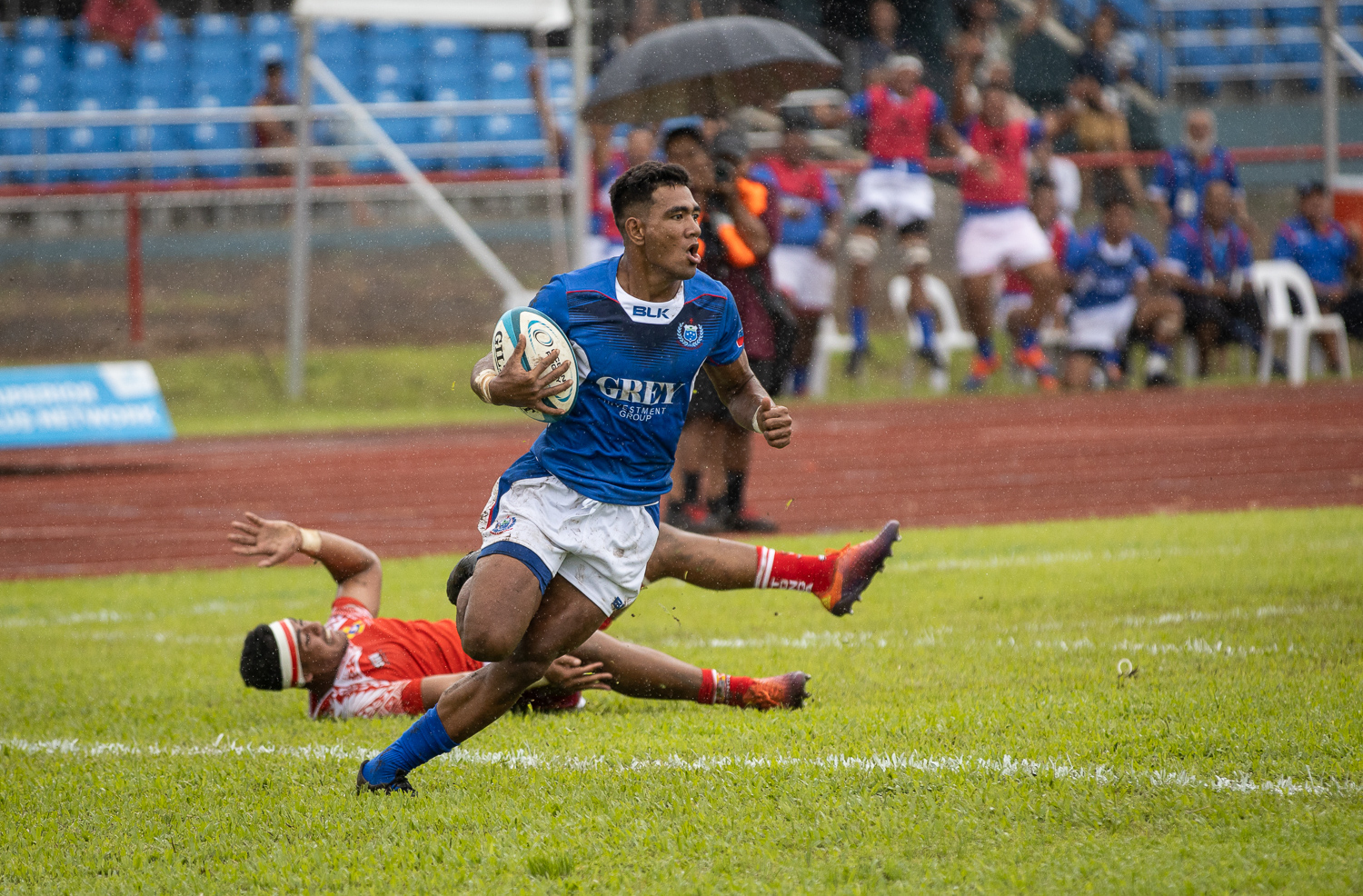 A yellow card to Tongan captain 'Ofa Manukeu made it hard for the visitors, and not long after his return Samoa scored again.

Having won a tighthead at the previous scrum, Samoa's next set-piece resulted in a pushover try for halfback Steve Onosa'i, making it 17-0 with 26 minutes played. 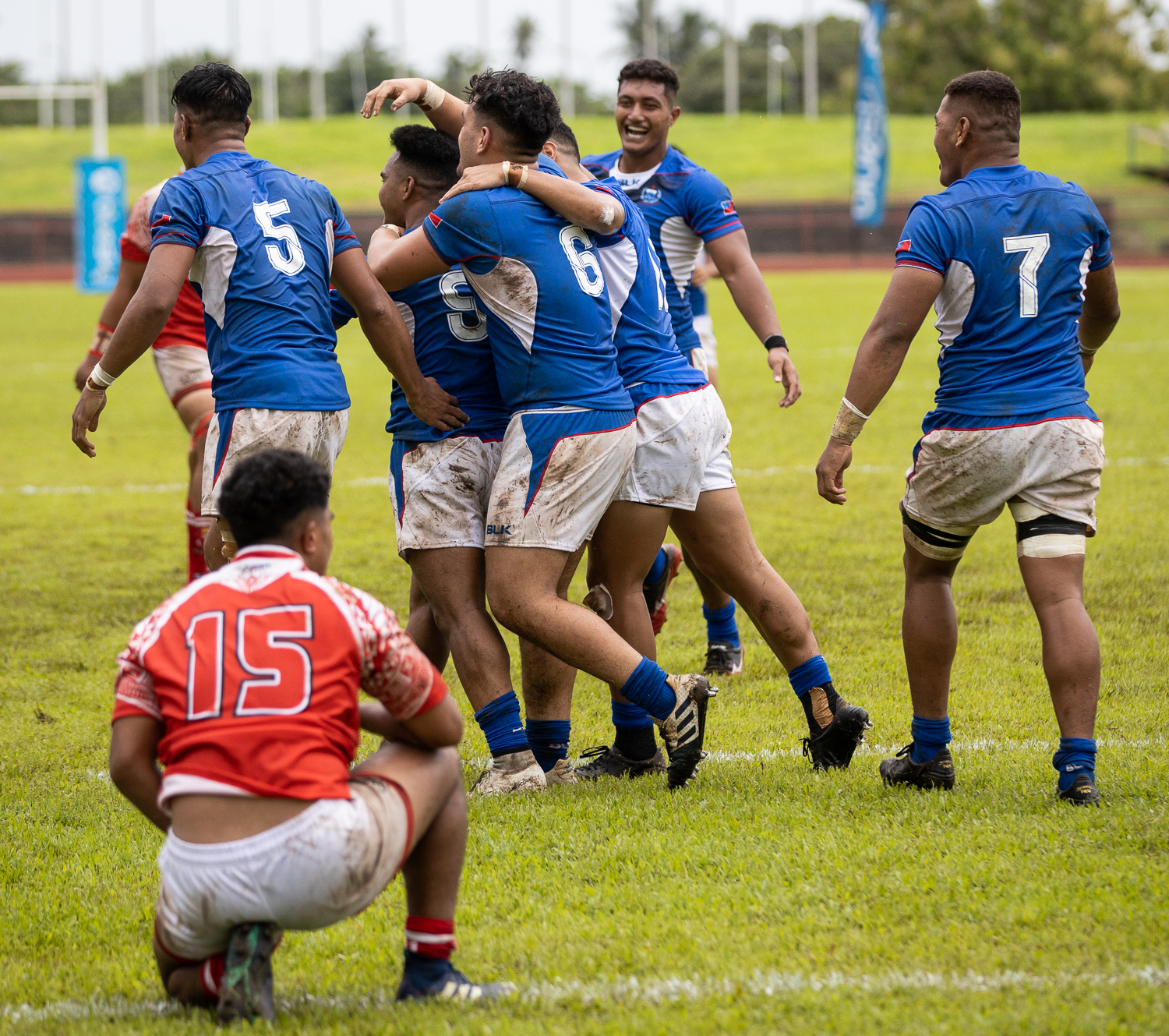 He doubled his tally less than five minutes later, seizing on the loose ball and soccering it ahead a couple of times to score from 70 metres out. 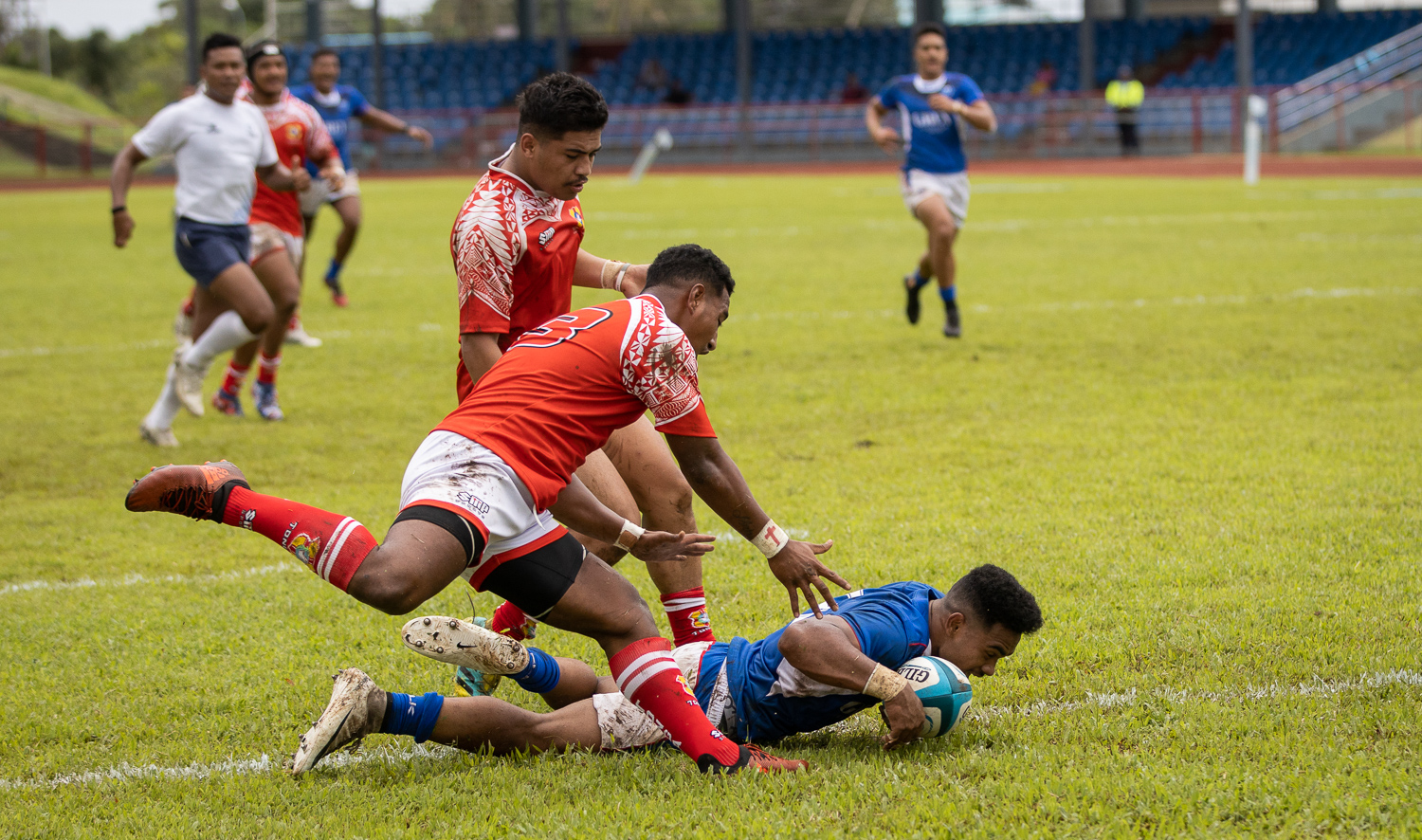 In the final 10 minutes of the half, Tonga mounted their most effective attacks but turned the ball over within five metres of the tryline three times. 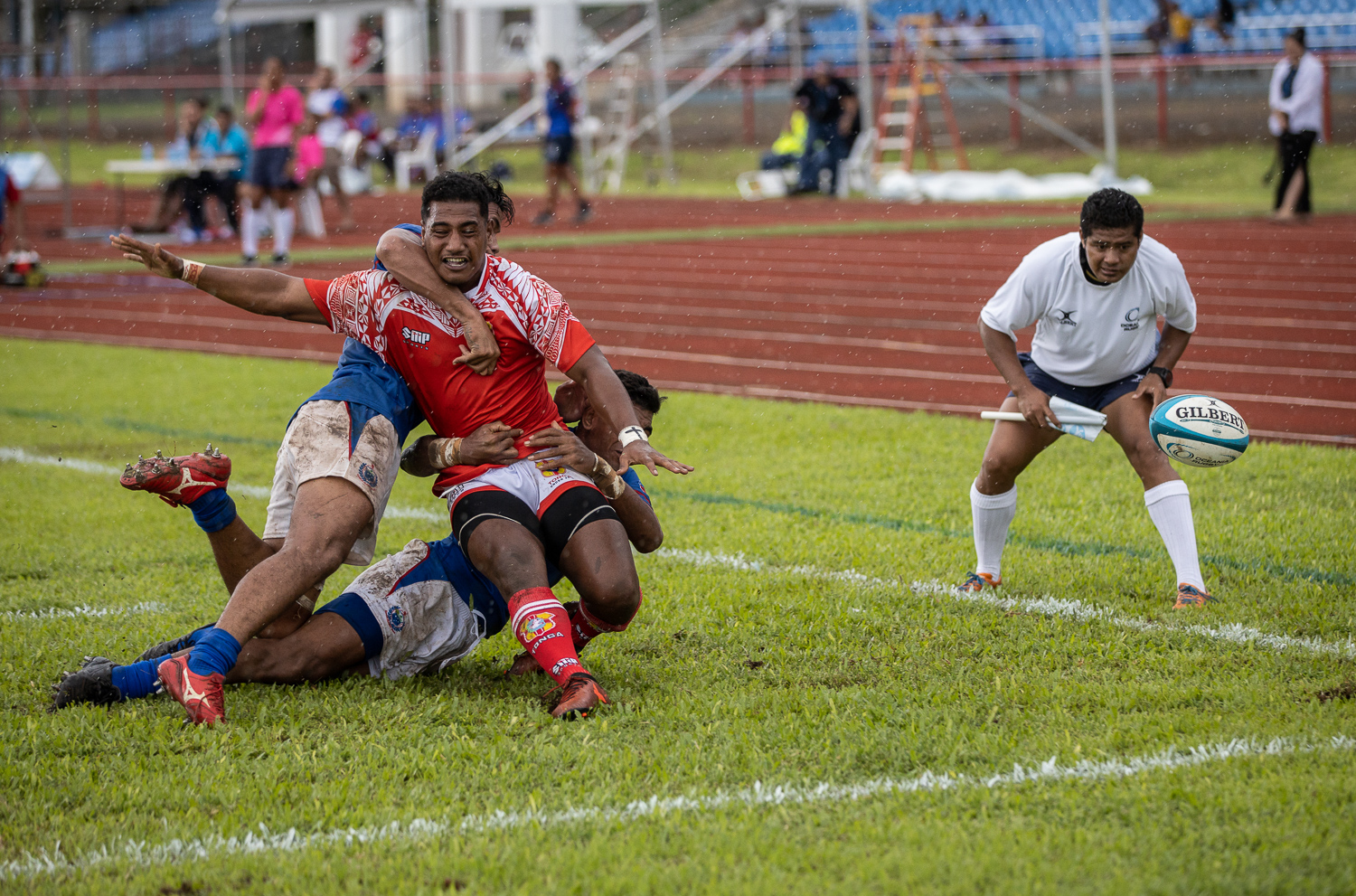 Samoa continued to do a lot of defending after the break, but rebounded to score the try that all-but sealed their win.

Centre Taunuu Niulevaea did well to recover a high kick, and the backs pushed the ball wide for Indiha Sao Tui-Huta to come into the line from fullback and score the Baby Manu's fourth try. 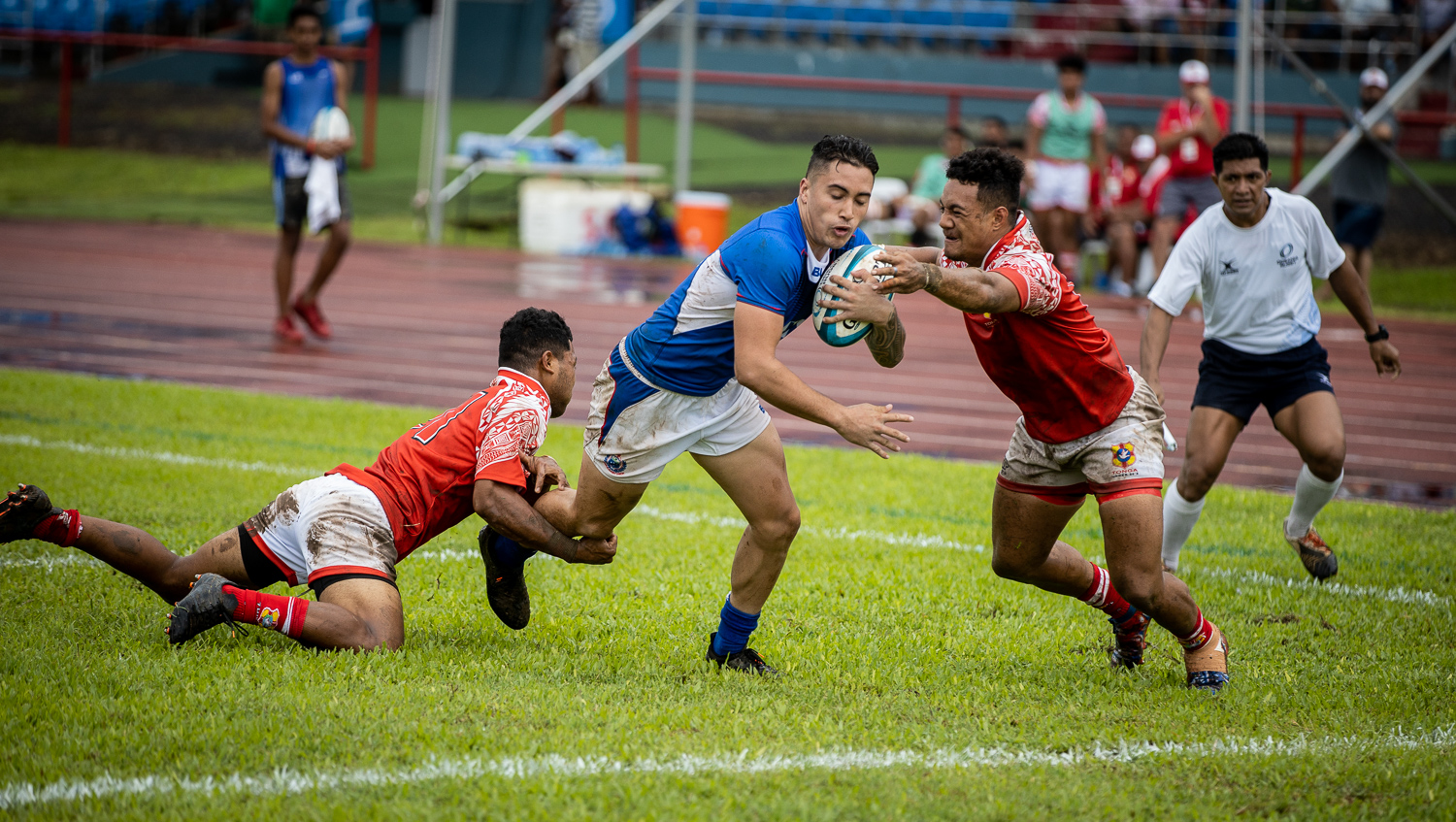 His five-pointer was the only one to go unconverted by Louis Bartley-Saena, who enjoyed an almost perfect day with the boot as part of an accomplished performance in the 10 jersey. 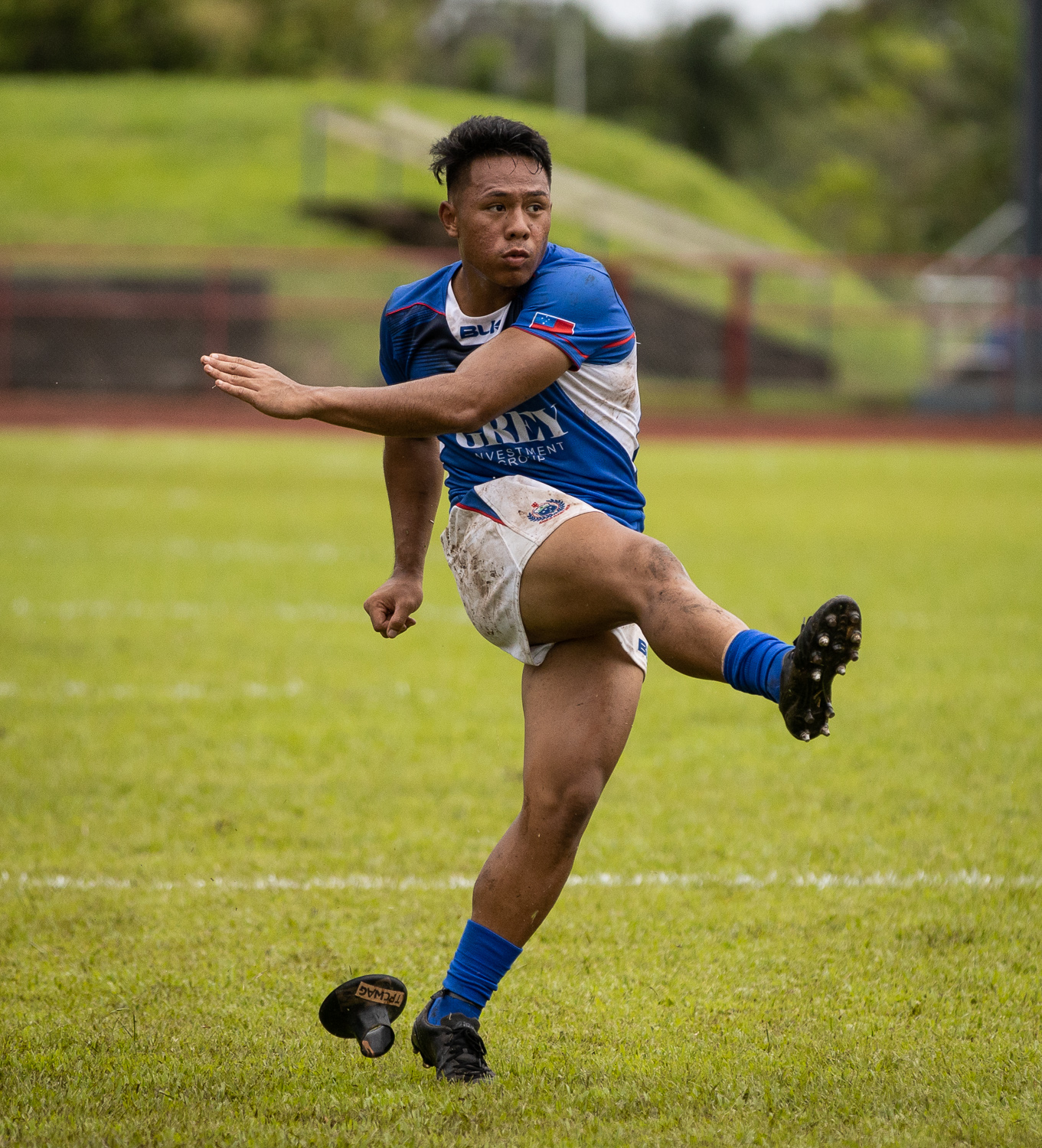 The try came somewhat against the run of play though, as Tonga continued to hammer away into the 22.

Owen Niue picked up a yellow card around the hour mark, and the visitors again came close to scoring before losing the ball.

Samoa had to see out five minutes with 13 players when flanker Ailepata Lemalu was sinbinned, but the defence held and cleared the ball to halfway. 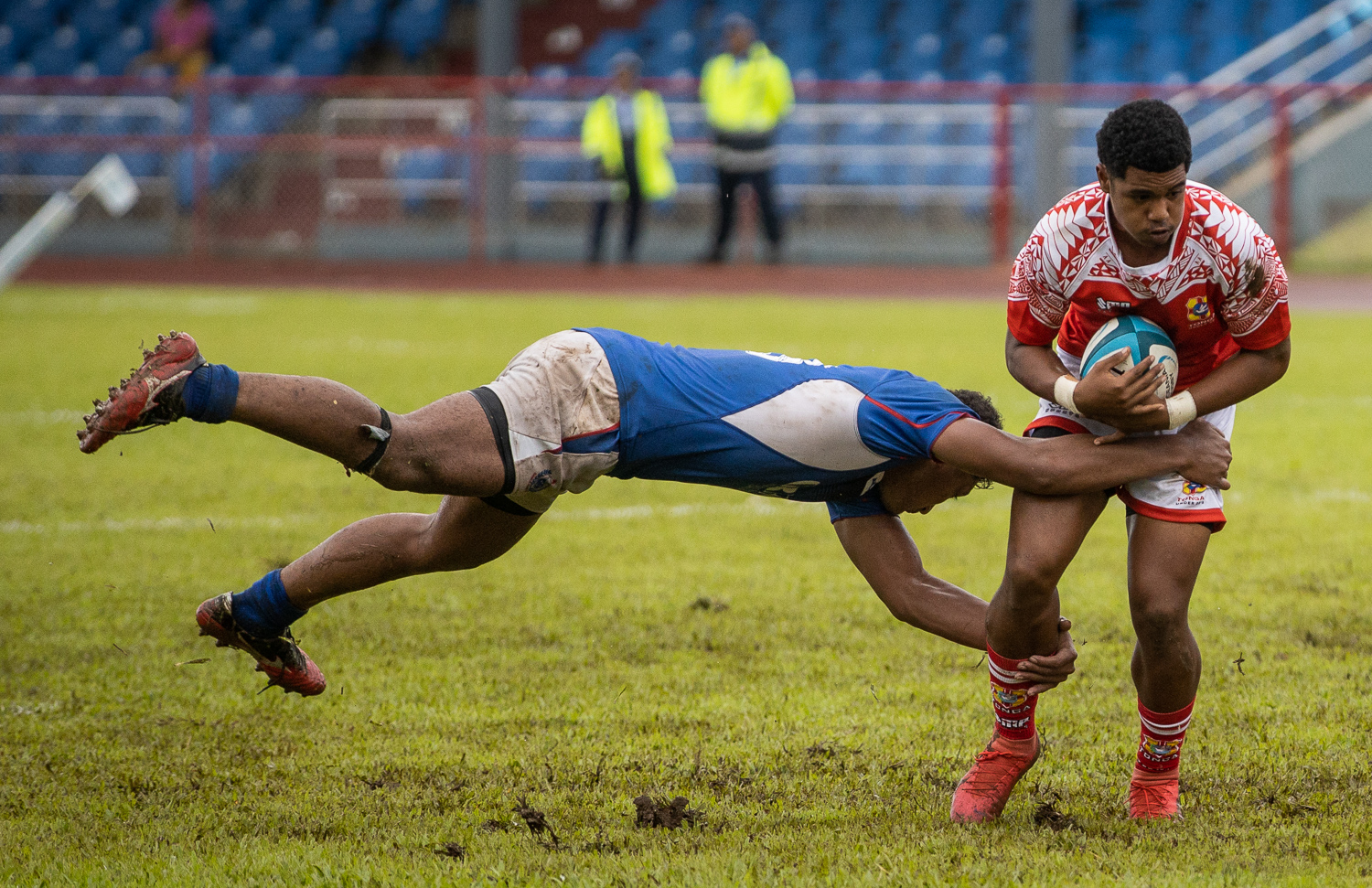 Steve Onosa'i kicked in behind, and his good chase helped force a knock on and a five-metre scrum. 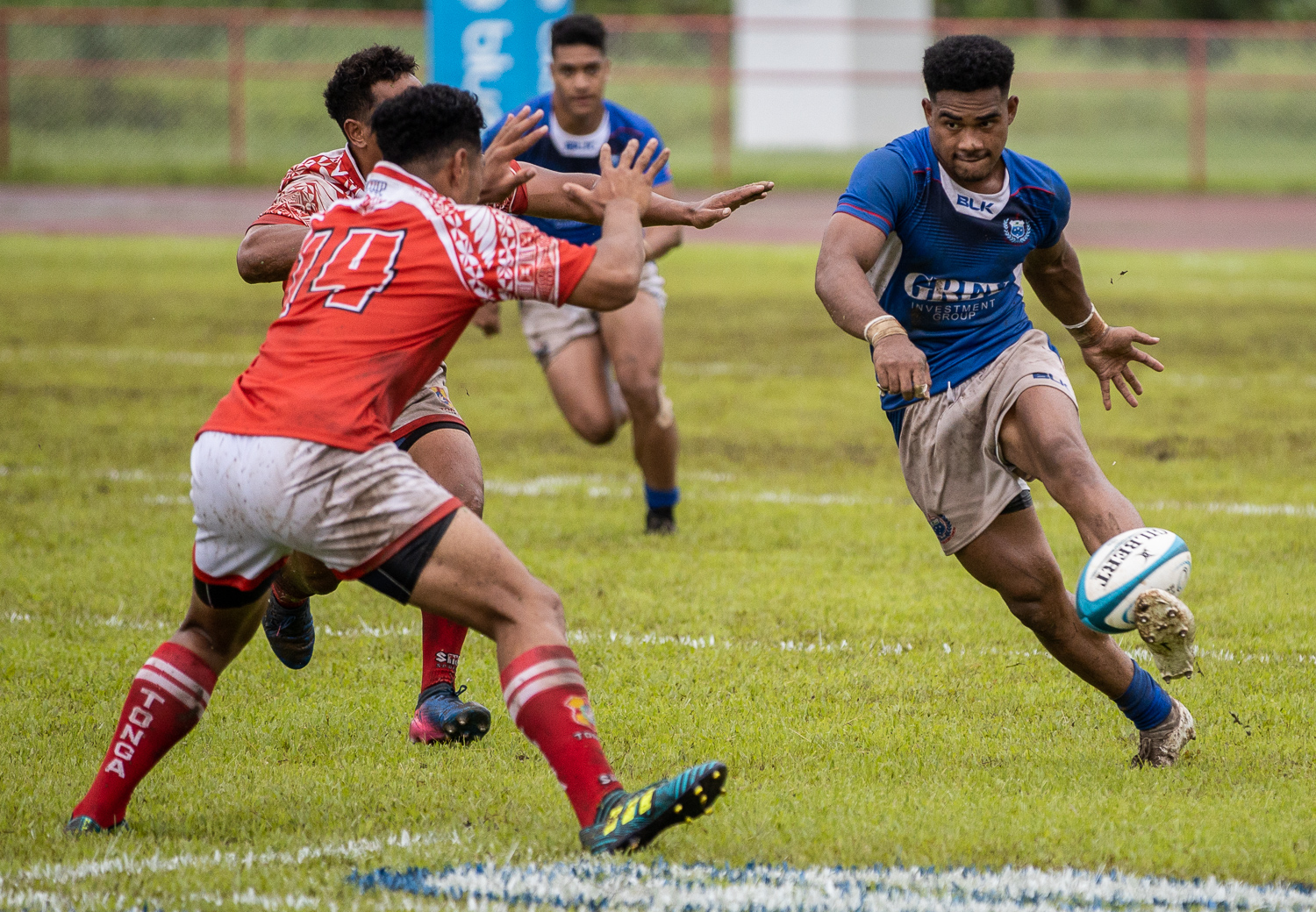 His captain East Timor Viliamu scored off the back of it, and although Samoa had Zephaniah Onesemo yellow carded for a no-arms tackle, they were able to hold their opponents to nil.

Viliamu said he was just as happy with his side's defence in the second half as their attack in the first. 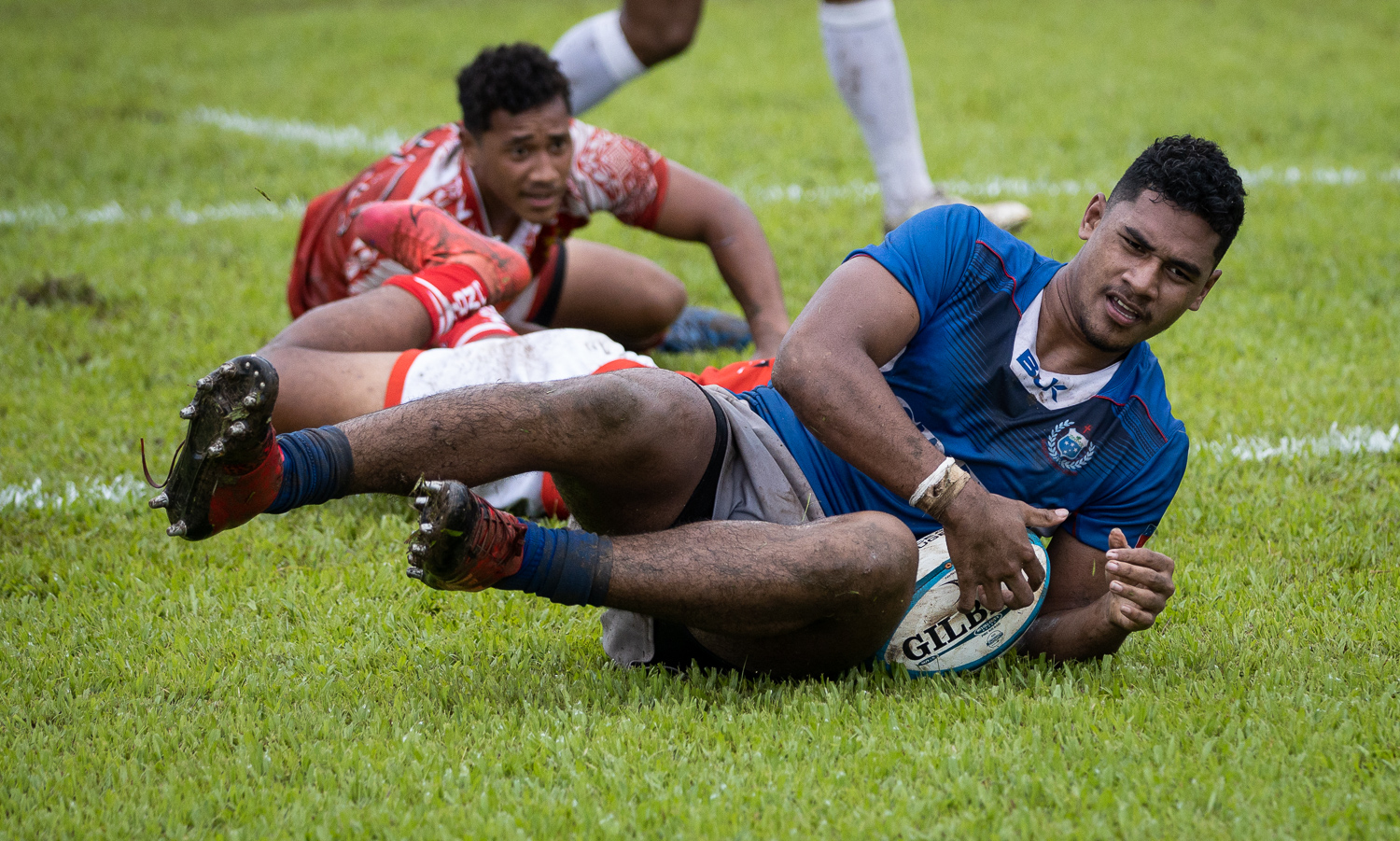 “[The boys] were good on the defensive side of things, and we managed to do our set pieces so well," he said.

“We put a lot of work and effort into our defence."

The team have been training together since late 2019, and Viliamu said he was more than proud of his team.

“I think we deserved the win, we worked so hard for it, for a long time."

They are now looking forward to their World U20 Trophy campaign in September, with a few of the players set to be involved in Samoa A's World Rugby Pacific Challenge campaign next month. 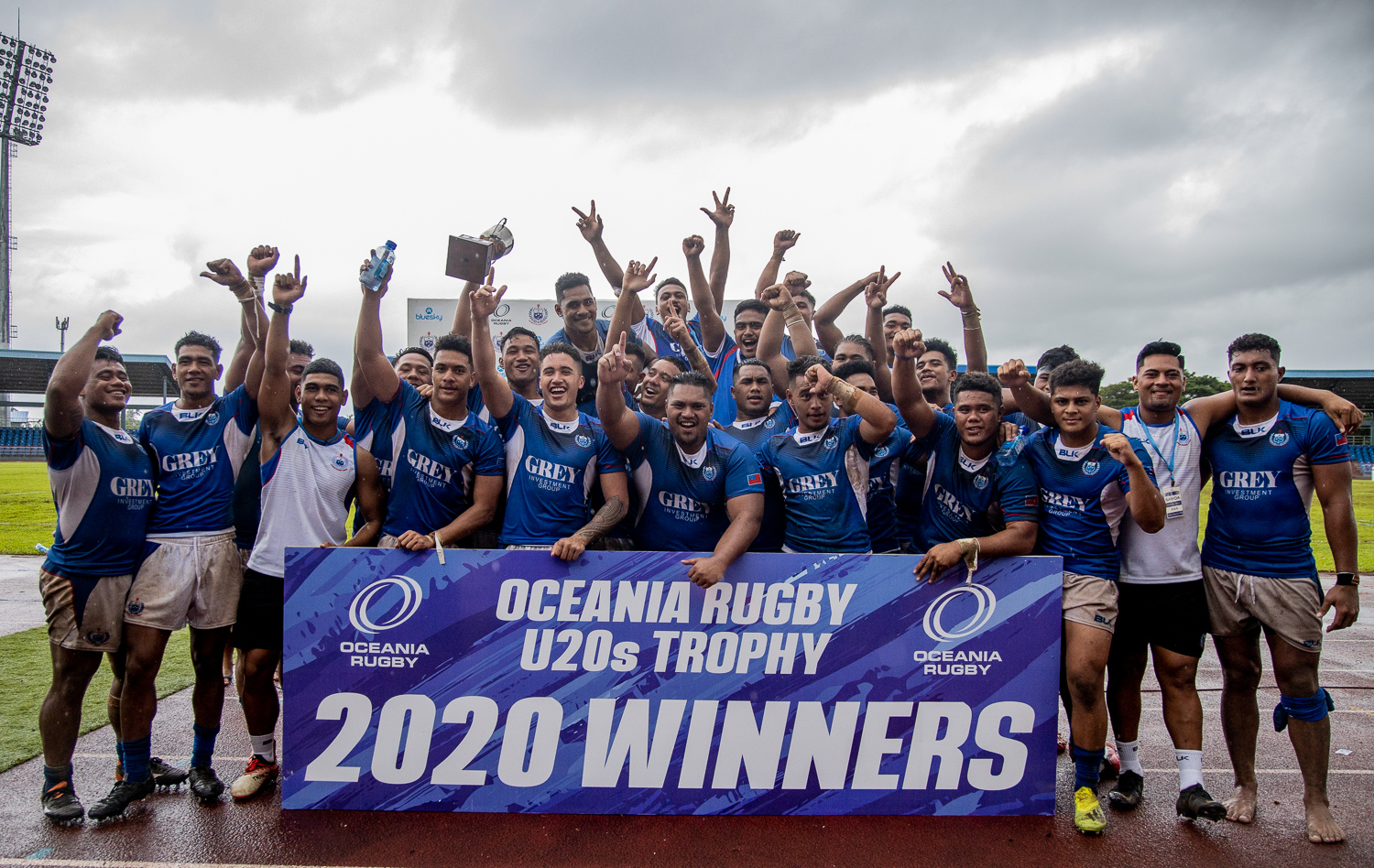