Cabinet has endorsed a move by the Government to close the Apia-Nadi flight route, as it moves to promote the use of Samoa Airways for passengers travelling between Samoa and Fiji.

The decision is revealed in a confidential Cabinet paper, FK(20)6 obtained by the Weekend Observer.

Dated 12th February 2020, the document signed by the Secretary to Cabinet, Agafili Shem Leo, is addressed to all Heads of Government Ministries and Corporations.

“During its meeting FK (20)6 of Wednesday 12th February 2020, Cabinet discussed PK(20)164 and endorsed the policies for flights to Fiji as follows,” a translation of the document reads.

“ii: All travel intended for Fiji will be routed to Auckland using Samoa Airways and return via Auckland on the way back to Samoa

“iii: For travel from Hawaii, they will come through Pagopago and then to Apia.”

The document does not give any reason as to why the Government has decided to close the Apia-Nadi route.

But it reveals that the Minister of Samoa Airways, Lautafi Fio Purcell, has been tasked by Cabinet to discuss the new arrangement with the management of Fiji Airways.

Attempts to get a comment from Minister Lautafi were unsuccessful. The Weekend Observer understands however that he has been in Fiji.

But the Ministry of Finance Chief Executive Officer, Leasiosiofa'asisina Oscar Malielegaoi, said the Government would do anything possible to support its national carrier when interviewed at his office on Friday.

Leasiosio spoke in his capacity as a member of the Committee appointed by the Cabinet to oversee the finances of the Samoa Airways.

“As expected a new airline will always struggle; we’re still in that infancy stage since opening up in late 2017. We are doing everything possible to support our national airline and it is in our best interest to support our airline. And the government will provide that support,” said Leasiosio.

He said at the moment passengers flying to Asia you travel through Fiji and there is an alternative that you can fly via Auckland and then to Asia.

“If we don’t force ourselves to make that change then it’s just talk, and we’re not fully supporting our airline.

“The move to suspend [flights] or forcing all government officials to use the Auckland Samoa airways sector it’s all in support of the national airline,” he said.

Asked on the impact of the tourism industry as a whole, in terms of shutting down another route, Leasiosio said it would be of net benefit to the sector.

“In a way it’s all part and parcel of that package to support our airline. And tourists at this age and stage people use online booking, after you go online the system will direct you to other alternative [routes]."

He said that a delegation is currently in Fiji meeting with their counterparts at Fiji Airways about the matter.

Attempts were made to seek a comment from Fiji and Samoa Airways on Friday. They were not returned by press time. 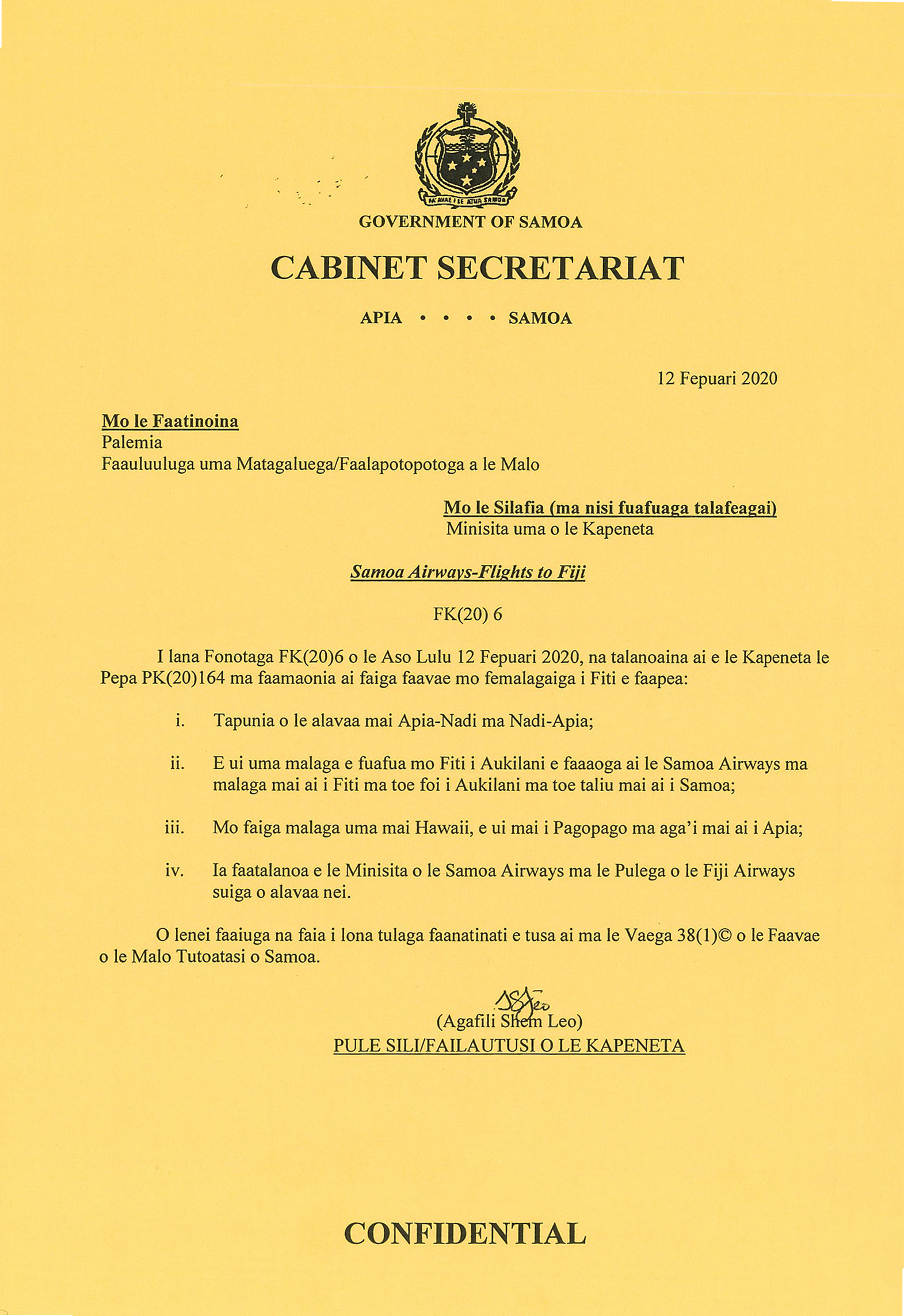 The following is a translation of the Cabinet paper:

During its meeting FK (20)6 of Wednesday 12 February 2020, Cabinet discussed PK(20)164 and endorsed the policies for flights to Fiji as follows:

ii: All travel intended for Fiji will be routed to Auckland using Samoa Airways and return via Auckland on the way back to Samoa

iii: For travel from Hawaii, they will come through Pagopago and then to Apia.

iv: For the Minister of Samoa Airways to negotiate the change of routes with the management of Fiji Airway

This decision has been made in an urgent manner in accordance to Section 38(1) of the Constitution of the Independent State of Samoa.