A.Y.I. Fiji have set the benchmark for the Vailima International Sevens tournament after defeating Moata’a 43-0 in their first match.

The locals entered the tournament in strong form having won the Apia Rugby Union 7s recently, but were outclassed by the vastly experienced Fijians.

Manu Laqai shrugged off a couple of tacklers to score in the corner and get AYI off the mark early.

Rusiate Matai grabbed a double before halftime to extend the lead to 17.

Moata’a got over the 22 to start the second period, but lost the ball.

Samisoni Viriviri scored a long ranger for A.Y.I., before they poured on further tries to Glen Cakautini (2) and Isake Komailevuka.

Earlier, Matniuel Lauli’i Lions defeated S.S.A.B. Moamoa 19-17 to take a share of the lead in Pool 1 after the first round of matches.

Moamoa opened the scoring through Garry Tupuola, but a nice break from Manu 7s squad member Paul Eti Slater, who kicked across to Bright Tapeneko who tied the scores. 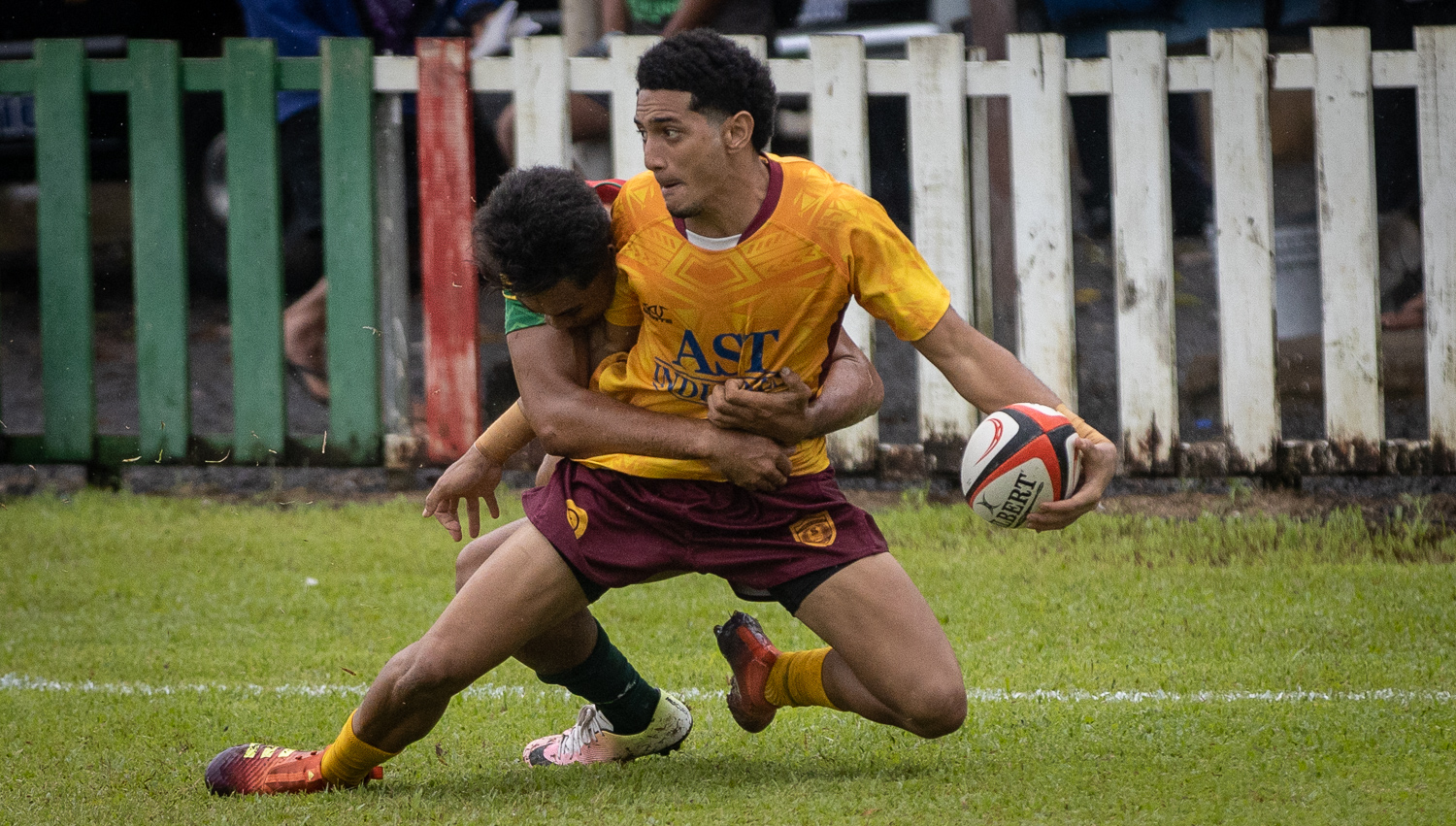 Niueli Molesi gave Lauli’i the lead on halftime, with the referees missing a knock on in the buildup.

United Brothers Satalo held on for a tight 10-5 win over Linwood in the second match in Pool 2, where the competition will be fierce to progress to the Cup quarterfinals.

Lupesiliva came from behind for an impressive 14-12 win over Vailele to take a share of the lead in Pool 3.

They trailed by 12 until Naturo Salatielu scored on halftime to keep them in the match.

He grabbed his second try after the break to get the team from Savai’i their win.

Fellow Savai’ians Tama Uli Salelologa ensured a place in the Cup quarterfinals on Saturday, getting their second win over Lauli’i Lions 12-0.

The first half especially was a real slog, with neither side able to keep hold of the ball too long.

Tama Uli were knocking on the door in the second until Des Sepulona finally broke the deadlock with a try.

They continued to fight, with Manu Samoa 7s winger Pesamino Iakopo eventually scoring on fulltime to seal the win.

In a possible preview of the Cup final tomorrow, Aleipata got up 17-14 over Linwood to sit top of Pool 1 through two matches.

They took advantage soon after, moving up to the 22 and getting the ball to Manusina wing Apaau Mailau to open the scores.

She stepped nicely to score her second try soon after, putting the defending champions from Canterbury on the back foot. 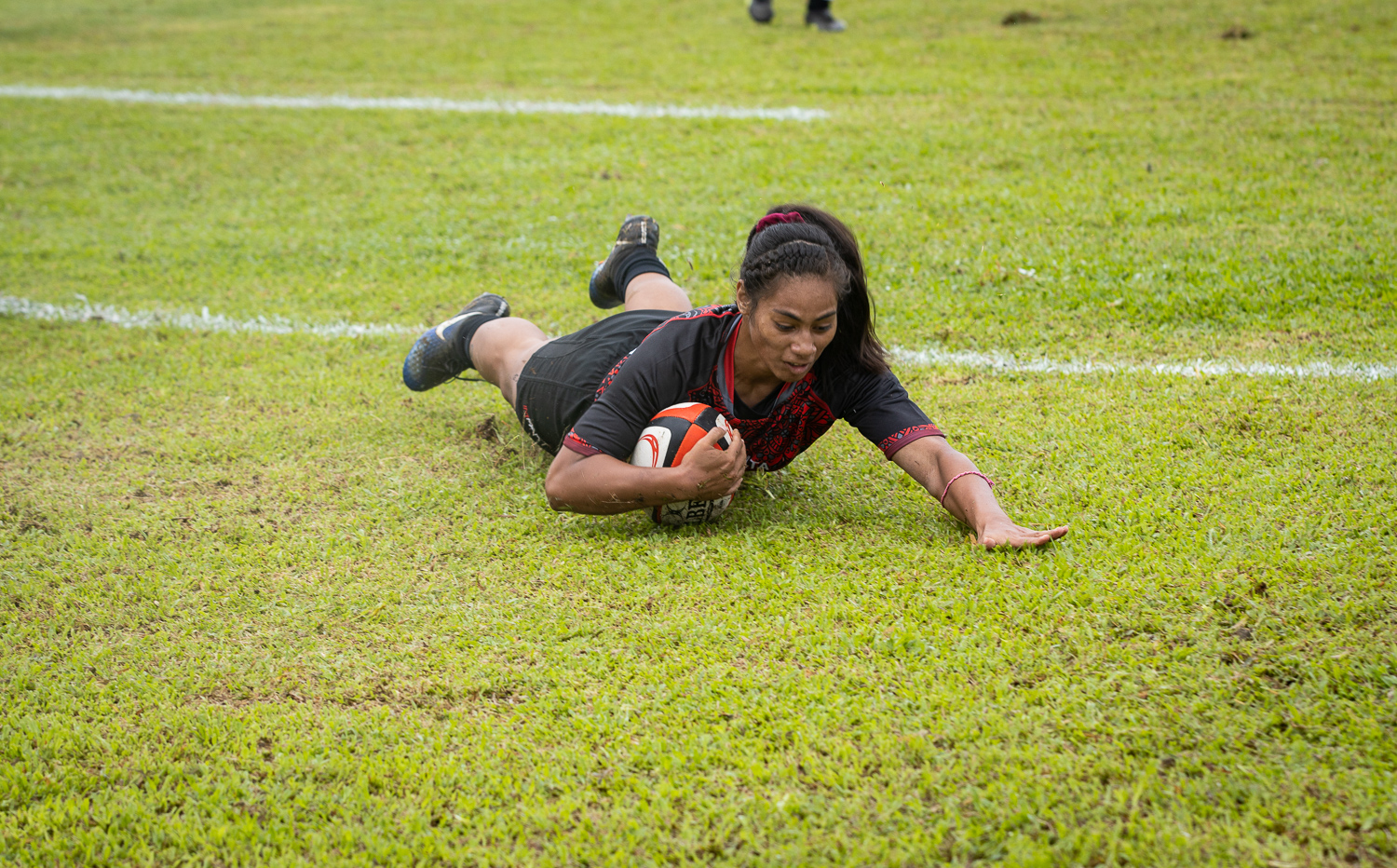 But Manusina number eight Nina Foaese turned the tide for the visitors, bursting through the line to get Linwood on the board.

And with the last play of the half they took the lead, going 95 metres to score a runaway try through Kaitlin Bates and make it 14-10.

Apaau Mailau completed her hattrick immediately after the break, going in from kickoff to piut her side back in the lead.

Both teams defended well in the second half, with Mailau coming closest to scoring with the second to last play of the game.

But neither team could add to their tallies, and Aleipata’s win assures them a spot in tomorrow’s Cup semifinals.

Apia Maroons booked their semifinal place as well with a 45-0 win over the A’ana Blues.

Lomi Mulipola scored a quickfire double to get the Maroons in front, before they added further tries to Elisapeta Leti and Faalua Lefulefu to lead 26-0 on halftime.

They scored a further three tries after the break to run out big winners, and should go three for three with a win over Lepea in their final match on Day One.

With the first round of games almost completed, the cream is already rising to the top on Day One of the Vailima Marist International Sevens.

The top seeds in both the men’s and women’s divisions all lead their pools after winning their opening matches at the ACP Marist Stadium in Lotopa.

It was always going to be tough for the women from Savai’i, going up against the team from Canterbury, New Zealand, who boasted seven recent Manusina representatives on their roster.

Elesi Leiataua got the very first try of the tournament a couple of minutes in, going 80 metres to score after Demi Salton won a turnover.

Manusina forward Easter Savelio was in soon after, as Teine ole Aava opted to kick away what little possession they had.

Linwood led 19-0 at halftime thanks to a third try to Kaitlin Bates.

Savelio got in for her second try immediately after halftime, and their were further scores for Bates and Alafou Fatu.

The Marist Angels then made history by being the first women’s team to represent the host club in a Marist tournament.

They were undone by more experienced opposition though, with Apia Maroons winning 31-0 to take charge in Pool 2.

Manusina Elisapeta Leti won an early penalty for holding on, and her national teammate Saelua Seleti opened the scoring for the Maroons with a scything run.

Apia continued to dominate territory, and scored their second try just before halftime through Alofa Sopoaga.

Seleti got another try a minute after the break, and then set up another for Leti brilliantly, a pinpoint kickoff allowing her teammate to collect the ball without breaking stride and score untouched.

Mileta Tino Sua scored on fulltime to complete the rout.

In the second game of Pool 2, Aana Blues defeated Lepea 10-5.

Aleipata were too much for Taga, winning 38-0 and showing they will be the team likeliest to challenge Linwood in Pool 1.

Manusina winger Apaau Mailau got a double for them in the first half, with another try to  Melania Tiligo coming in between.

Fellow international Linda Fiafia scored on halftime to make it 17-0.

They added a further three tries in the second half to continue a dominant display.

Ott Constructors Tama Uli Salelologa got their campaign off to a solid start with a professional-looking 31-5 win over Talavalu from American Samoa.

The team from Pago are a national representative side, but it was Tama Uli that looked like a World Rugby Sevens Series outfit with their ball retention and side-to-side play.

Manu Samoa 7s winger Kelvin Masoe scored twice in the first half to make it 12-0 at the break.

Tipa Sapeti then got on the board for the team from Savai’i a couple of minutes after the break, but Talavalu went straight up the other end to get their first try.

But Salelologa proved too good, with Des Sepulona and Meleniuma dotting down in the final minute of play.

Apia and Marist Saints fought out a tough battle, with the Maroons coming out on top 14-5.

The hosts were first to score through Sale Kalepi, and last year’s bronze medallists Apia looked to be on the backfoot when Sile Alivale William picked up a yellow card for a scrap off the ball.

But they bounced back after halftime, scoring through Epati Levasa and Ionatana Tino to take the win, and the lead oin Pool 2.

Tepatasi earned their top seed status in Pool 3 for their run to the Cup semifinals last year, and backed that up with a 12-5 win over S.C.O.P.A.

Iafeta Purcell starred for Tepatasi with his speed down the sidelines, and got the try that made it 5-0 at halftime.

S.C.O.P.A. broke into the 22, but couldn’t convert on some good possession before losing the ball

Purcell made another break down the wing, kicking infield for Joe Telea to score the try that extended the lead.

Melvin Perenise got S.C.O.P.A on the board with a late try, but it was mere consolation for them.

Pool 4 top seeds B.B.E. Vaiala fielded a star-studded lineup in their opening game against HJ Keil Vaimoso, and it showed as they ran out 33-0 winners.

Blackie got staright inot the 22 from kickoff, with former Manu Sevens rep Murphy Paulo opening the scoring in short order.

David Junior Tavita got Blackie’s second, getting to the loose ball first to make it 14-0 early.

Former 7s and Samoa A rep Johnny Samuelu got on the board soon after to make it 19-0, which was the halftime scoreline.

Tavita got his second try not long after the, as Vaiala continued to dominate through the likes of Manu Samoa players Melani Matavao and Patrick Fa’apale.

Matavao got the final try of the game to complete the rout.