To kick off his tour alongside his partner, Vainalepa Livington Efu, the pair joined Maluafou College students for a rousing concert on Tuesday morning, which included inviting a Year 9 student up on stage to perform the rap from his debut single Alo i ou Faiva.”

Their performance had all the students cheering and briefly dropping their exercise books.

Teachers, lined up at the back of the hall, had their phones out filming young Kisione Sione deliver on stage.

Lesa said it looked like the student was going to be too shy to get up and rap, until his friends encouraged him.

“He was shy but his friends said yo, [and pointed at Kisione]. I was like, yo, loyal friends, that’s the one!"

New Zealand born Lesa said since his debut into the pop world in August, he has been thrust into a position of fame amongst Samoa's youth he never expected.

“Unless you’re from Hollywood, it’s something you have to try really hard to get used to,” he said.

“It’s humbling, you take a step back and breathe to take it in. It’s overwhelming and a beautiful thing to see.”

He said he tries to make sure the messages in his songs are important to youth and that they come across clearly. It’s a work in progress, he admits, and it doesn’t happen every time.

“When you’re in front of the kids is that as long as your message is clear and you know what you’re trying to say and you’re articulating well, that’s the main thing," he said.

But the fame has not gone to their heads, nor affected their role in the household. 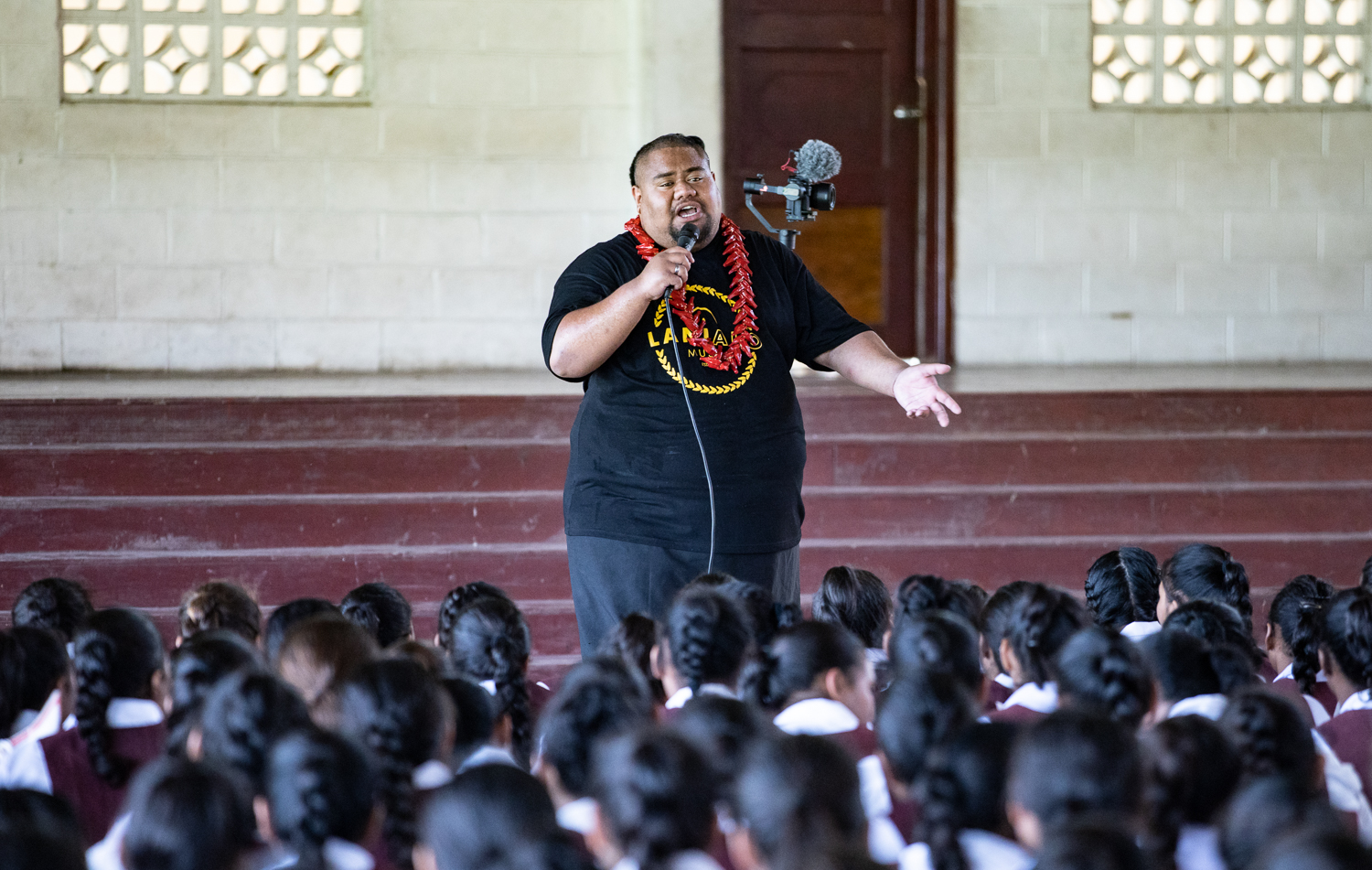 Addressing the school after the performance, Maluafou College Principal Lasi Tavae admitted when the pair were asked to perform (only a day in advance) she was reticent to allow a disruption to the beginning of the school year.

“But you know, I was wrong, and you have done an amazing job today,” she said to great cheers from the students.

“You have made a fresh start for the teachers and students.”

No such concert would be complete without a selfie session and photo opportunity behind the school hall, with students and teachers alike lining up to be photographed with Lesa and Vainalepa.

Among the reasons for the school tour, Lesa said he wanted to do something for kids who may have lost friends or family to the measles epidemic, an event that affected each and every Samoan.

“We like to provide a bit of encouragement and support to the kids through the music as a way of giving them a bit of a boost at the start of the year, and being in the post-measles epidemic phase.

“It’s our chance to spread a bit of love, and a do some uplifting, especially after the response to Alo I ou Faiva in August, the response was really overwhelming.”

The two are especially excited to perform in their home villages, Saanapu for Lesa and Aai-o-Niue in town for Vainalepa, as well as his old stomping grounds at Samoa College and Nofoalii Primary School.

The tour will culminate in the I Love Samoa concert on February 15 at Gym 1 in Faleata with a group of artists coming together to perform in the nation’s honour, and on Friday Lesa and Vainalepa will perform for a small crowd at the Manamea Art Studio in Vaigaga.

When the performances are all said and done, Lesa and Vainalepa will return to New Zealand and work on writing more music and finishing their first E.P. or album.