The couple married after 19 years together in surprise wedding (Photo: Coconet TV)

One half of Samoan Kiwi R&B sensation Adeaze, Nainz, married his long-term partner during a surprise wedding in front of family and friends last weekend.

Nainz, the stage name for artist, Feagaigafou Tupa'i, and new bride Rebecca disguised their New Zealand nuptials as a concert being held by Tone6, a musical group for which Tupa'i is a mentor, Coconet TV reported.

Surprised guests were reportedly told through to the garden area and past decorations in the venue's front-of-house, which they were told were decorations for a separate birthday party.

Continuing the ruse, Tone6 greeted guests and then performed a couple of songs.

But the surprise was unveiled by the couple's youngest son, Josiah, who announced they had been asked to assemble to witness the wedding of his parents.

The announcement was met with cheers, laughter and tears as families and friends were overwhelmed with surprise.

Mr. Tupa'i and his wife have been together for 19 years and have four children together. Marriage has always had always been part of the couple's plans but continued to be postponed.

But three weeks ago Mr. Tupa'i suggested to his now-wife that they seize the moment and seal the deal.

Mrs. Tupa'i told news outlet Coconet TV that the ceremony's focal point was honouring God; the blessings he had provided the family; and recognising their family and children.

The couple said keeping their plans secret proved difficult but they did not want to burden their family and friends with preparations.

"We decided to do it this way because we didn't want our family or friends spending any money on us, coming here with gifts or as is the Pacific Island way our families would have wanted to put in to help support" said Mrs. Tupa'i .

"This is our way of saying thank you to all our dearest family and friends that have helped mould him and I as a couple over the past 19 years.

"Every single person who is coming today is like an ingredient in our lives and we're the product of that and this is our way of saying thank you to them and honouring them for what they've done for us personally." 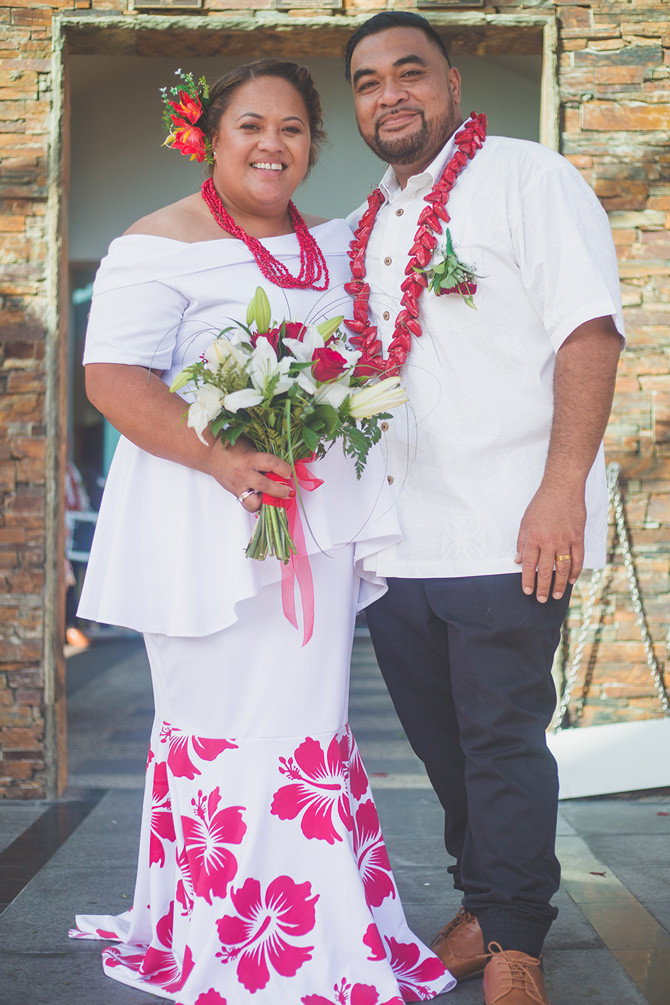 The couple's children were involved in the planning process; they felt that the wedding was as much for the kids as it was for them after 19 years together.

Mr. and Mrs. Tupa'i's children and nieces made up their wedding party.

Their eldest son, Viliami, was best man while the couple's eldest daughter, Praise, was maid of honour.  Their younger children, Josiah and Sina, served as groosman and flower girl respectively.

Rebecca said the secret to staying together for 19 years was simply being able to work through the hard times; hitting rock bottom and not looking to quit; and being able to forgive and move on.

Adeaze are a New Zealand R&B/soul duo comprising of Samoan brothers Nainz and Viiz Tupa'i. Their debut album, Always and for Real, was released in 2004 and topped the album chart in New Zealand.