With less than a week left before school begins, parents seeking proof-of-vaccination forms required to enroll children in schools are being turned away as authorities blame shortages and inconsistent record-keeping.

Savai'i's Tuasivi and Safotu District Hospitals have run out of vaccination cards. An attempt by a reporter from the Samoa Observer to obtain a vaccination card from the hospitals was unsuccessful on Friday because staff were unable to produce cards.

New supplies are not expected to reach Savai'i until at least the first day of the new school year, Monday the 27th of January, hospital staff told parents on Friday.

Meanwhile, at other hospitals families are reporting that they have been asked to recall the exact date and locations for their children's immunisations as a pre-requisite for receiving proof-of-vaccination.

People across Samoa, including those on the big island, who were vaccinated at home by a mobile clinic during last year's mass vaccination campaign, or at an emergency clinic, are facing a separate set of logistical difficulties for obtaining the cards.

All people vaccinated during last year's outreach programme have been instructed to obtain their proof-of-vaccine cards from Tupua Tamasese Meaole (T.T.M.) Hospital where mass vaccination records are kept.

Procedures for verifying children's vaccinations appear to differ between hospitals.

The Samoa Observer was told by Tuasivi Hospital staff that people do not need to recall details of their children's immunisations if they were vaccinated there, as all the records are available.

But other parents have reported watching nurses ask parents when their child was vaccinated and then noting down the date on official records without verifying them against the hospital's own.

At Safotu Hospital, the Samoa Observer witnessed nurses have asked people to recall the dates and times of their children's vaccinations to save them from manually searching through files for evidence of their vaccination dates. Parents have also complained that some vaccination records are missing.

On Friday at the Tupua Tamasese Meaole Hospital in Moto’otua parents around Upolu were lining up to receive proof-of-vaccination cards for hours.

One father from Leulumoega, Tavita Levi, was sitting on a chair after growing weary standing in line.

“We came early in the morning with the hopes to get vaccination cards for two of my children: one who is attending Leififi College and the other who is in primary school,” he said.

The 42-year-old father-of-three said a wider variety of locations should be made available for parents to pick up the cards because there were  so many students but only one place to obtain the records.

“Upolu has so many children with how many schools?," he said.

"It would be a good idea to have so many locations so we can come and attain the cards.

“The scariest scenario is school starting on Monday while there are still parents not getting access to the cards for their children to attend school.

"The priority is my children's education and because school starts next week; we had to wait in line and get these cards." 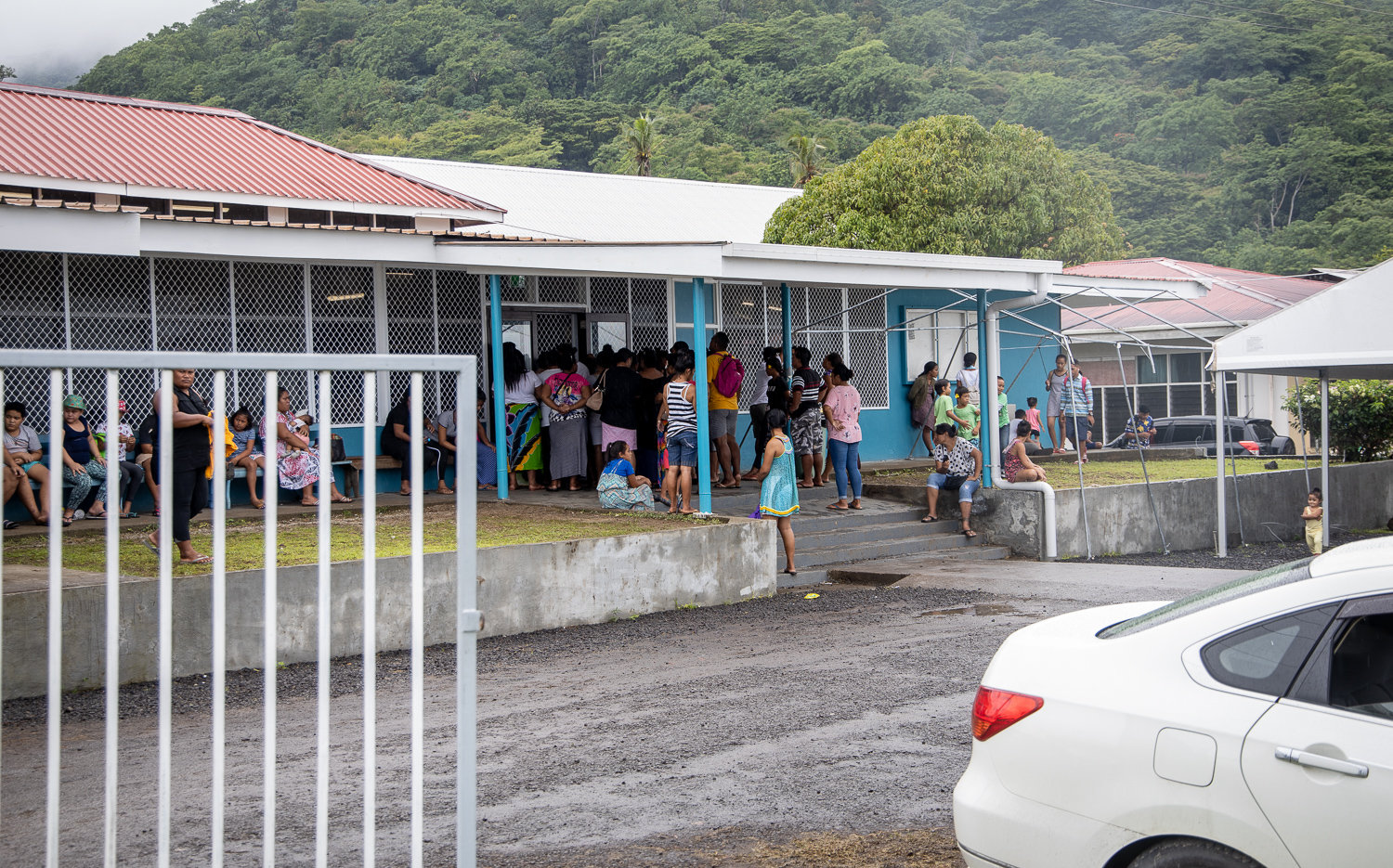 At Tupua Tamasese Meaole Hospital in Moto’otua, a Pesega College student who declined to be named was vaccinated there was asked to provide proof of their immunisation.

With nothing to offer them, they were turned away.

Leilani Jane Seau, from Vaitele-Uta was told by T.T.M. Hospital staff that anyone vaccinated before November 20, the beginning of the mass campaign, will not be recorded. She spent all day on Thursday waiting for staff to confirm she was vaccinated.

She cannot leave without her vaccination card because she won’t be permitted back in class, Miss. Seau said. She may even get vaccinated again.

During the measles, mumps and rubella (M.M.R.) mass vaccination campaign, launched in November to curb the spread measles, unless parents presented their children’s baby books to nurses, majority of people were not handed any proof their immunisations.

With the exception of some mobile units which recorded families' vaccinations digitally, the majority of people who received vaccinations last year had immunisations noted in writing. Thiose paper records now represent the bulk of proof-of-vaccination records at T.T.M. Hospital.

The Minister of Education, Sports and Culture, Loau Keneti Sio, when asked whether the lack of vaccination cards may lead to some students not being able to attend school noted that the school year's start was more than a week away.

“I will discuss this matter with my Chief Executive Officer [Afamasaga Dr. Karoline Fuata'i] but with anything there must be a way," the Minister said.

On the sidelines of a Ministry of Education, Sports and Culture seminar on Government Grants the Health Ministry's Deputy Director General of Public Health, Tagaloa Dr. Robert Thomsen, restated that this year was proving too soon to realise the aims of the Infants Amendment Bill 2019.

The bill states that a certified copy of a complete, vaccination and immunisation record of a child from birth is a prerequisite for school enrollment. Tagaloa said the immunisation schedule for children doesn’t quite line up with school entry.

“At this stage we cannot really fulfill all the requirements as required by the new act to have every child fully immunised when they enter school,” he told the Samoa Observer.

“It is because of the fact that in order for a child to have all its required immunisation to be updated it takes up to seven months to catch up all the required immunization before you enter school.

“The immunisation is never complete there are vaccines that are given at certain ages and so we are working on trying to catch up with that.”

The Infants Amendment Bill (No. 2) 2019 makes the provision of a comprehensive vaccination record a mandatory requirement for school enrollment. Principals found to have enrolled children without complete vaccination records would face fines of up to $10,000.