Samoa
Tropical Cyclone Tino intensified into a Category 3 cyclone on Saturday, and is causing major havoc for some families in Samoa. (Photo: Aufai Areta Areta)

Tropical Cyclone Tino was still one thousand miles away but it shook Samoa on Saturday as families across the country hunkered down and faced extreme rain, power outages, and devastating winds.

The cyclone was upgraded to a category 3 storm on Saturday as it lashed Fiji with damaging winds peaking at 95 kilometres per hour and continued towards Tonga where it was expected to land overnight.

The Acting Chief Executive Officer of the MET Office, Mulipola Ausetalia Titimaea, said Samoa experienced winds of between 47-50 kilometres per hour on Saturday, a level below the threshold for Tropical Cyclones, which begin at 63 kilometres per hour.

The cyclone is not forecast to reach Samoa, but Saturday's wild weather was a side-effect of the broader weather system feeding its southeasterly journey across the Pacific.

As wind gusts intensified on Saturday afternoon, most of Upolu was struck by power outages in the early afternoon.

Power had been restored to some regions by the late afternoon but the resumption of blustery conditions threatened to affect ongoing work to restore the supply of power.

The Samoa Meteorological Service (S.M.S.) reported the side-effects of the cyclone were behind rough seas across Samoa as the storm began to move closer on its journey to Tonga.

"Swell observations shows heights vary between 2.5 [to] 3 metres early [on Saturday] morning. These swells will continue to impact the Samoa open waters [until] at least Wednesday morning and may reach 4.5 metres [...on] Sunday evening,"an S.M.S. report released on Saturday afternoon read.

Families in low-lying areas across Samoa were most heavily affected by the wild weather which meteorologists had warned could cause flooding and landslides.

"We are very concerned because our home isn't very strong," said 45-year-old Sina Mamea from Afega.

"We are only using one house right now because the strong winds and heavy rain gushed through the open house and tarpaulins cannot even hold it."

Ms. Mamea told the Samoa Observer that she was concerned for her children's safety as the sea comes in and wind rushes through their home.

"At this point we're worried about everything: the rain, the waves and the wind. Everything gets wet during the strong winds and rain, tarpaulins are no help, been trying to find some money to get better ones," she said. 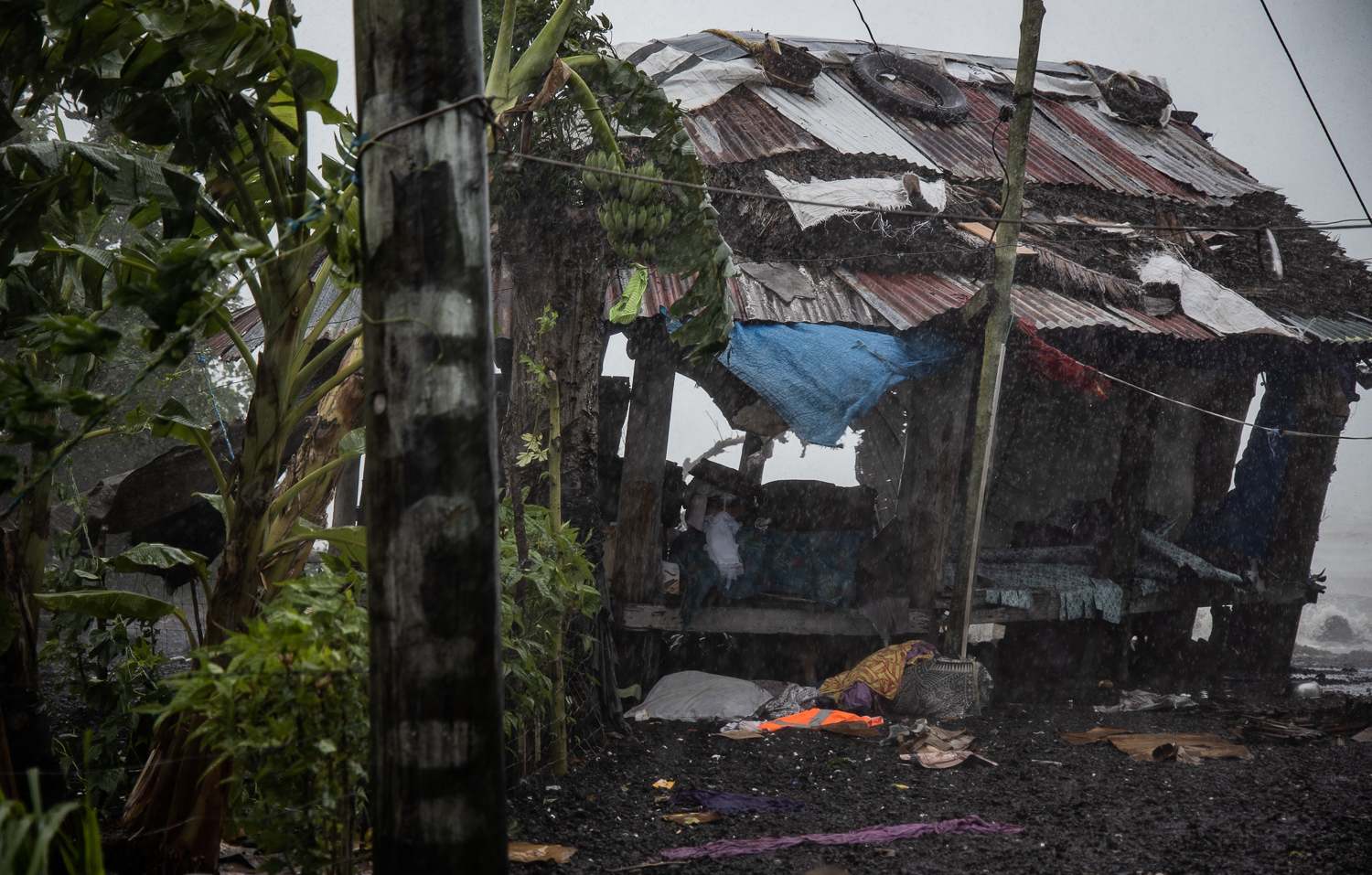 As Ms. Mamea spoke to the Samoa Observer wind gusts and heavy downpour began to intensify.

She and her children were rounded up inside a small family home only lightly insulated from the elements. Some of the family's belongings were blown out of their open fale home.

Cars were forced to pull over as they were rocked by extreme winds and drivers were forced to try to negotiate extremely limited visibility. Witnesses further reported the collapse of billboards at Vaitele.

On Saturday morning, the Samoa Meteorological Office reported that the weather system behind Tropical Cyclone Tino was moving in a southeasterly direction at a speed of 18 knots towards Tonga.

The S.M.S. noted advisory warnings were in force for all of Samoa, for heavy wind gusts, rain, flooding, and small crafts

The windy and wet weather conditions are forecast to persist across the island for the rest of Saturday as the active convergence zone (a meteorological term for clashing weather systems) feeding Tropical Cyclone Tino remains in Samoa's vicinity.

Meanwhile, the Samoa Shipping Corporation informed the public that ships would not be taking to increasingly choppy seas leaving ferry passengers stranded.

A Samoa Airways flight from Auckland, scheduled to arrive at Faleolo International Airport at 2.40pm, was also cancelled while the carrier's other flights were facing delays, a spokesman for the airport said..

The MET office warned the public to look out for heavy downpour and poor visibility, strong and gusty causing lying objects and foggy and slippery roads over mountain passes and ranges.

Warnings were also issued for strong river overflows and potential landslides, water pooling near roadsides and waterways and strong currents and rough and choppy seas.

Much of Upolu was hit by power outages on Saturday as falling trees and heavy rain interfered with power poles and wires.

Outages began to affect the western part of the island in the early afternoon but by Saturday evening they had spread to the east and southeast coast of Upolu. Affected villages spanned from Tiavea down to Poutasi Falealili.

According to an update from the Electricity Power Corporation, electricity had been restored from Tanugamanono to Avele by 4.30pm after successful debris clearance.

Parts of Pesega to Lotopa and Tuanaimato to Vailoa also had electricity restored while restoration work was expected to continue into the evening for remaining affected areas.

Parts of Afega to Nofoalii all the way to Faleolo also had their power reconnected.

The bad weather is projected to continue through at least Tuesday.