Lepea vs Auckland in historic friendly

Auckland Samoa defeated Lepea 27-5 at ACP Stadium, Lotopa on Tuesday evening, in a friendly 15s game between the two women’s rugby sides as a warmup to the Vailima Marist International Sevens Tournament on Friday and Saturday.

Auckland were the better team on the day, although Lepea can take some encouragement from playing well and scoring the best try of the day; a lovely wraparound move between the backs out wide.

“Girls from the other villages are here to help us, experienced girls who have played for Manusina.

“We’ve learnt so much from this game and the weeks building up to this game.”

She said it was maybe twenty years since Lepea last had a women’s rugby team, as the sportswomen in the village tended towards football.

“Maybe they are props in the future for the Manusina, we don’t know.”

The Samoa Rugby Union invited Lepea to play the Auckland side towards the end of last month, and they have been training every day since.

“Everyone’s looking forward to after work, we go to the field,” Laumea-Edward said.

“It was quite a challenge because of the transport, sometimes there was like seven of us, or four of us.”

She thought they competed well against Auckland considering it was their first game.

“As long as we had a try, we missed some but that’s how the game goes.”

Auckland Samoa co-coach Vania Wolfgramm was happy for both teams, and agreed that Lepea competed well.

“There are some very talented girls in there, it’d be really lovely to see them get some opportunities,” she said.

Lepea will get a big opportunity this weekend, with them taking the Marist Invitation place for the International Sevens.

Laumea-Edward said the team are really looking forward to it, and that playing Auckland would be a big help for the weekend.

She said hopefully it and the 15s friendly would be a good platform for women’s rugby in Lepea going forward.

“The village matais and especially the men are supporting us.

“It’s good to have men’s support because if there’s no support from them we’ll never succeed in rugby, a male-dominated environment.”She said sport is for all, not just one gender or group.

“We only just met a few months ago, but you see what we’ve created.” 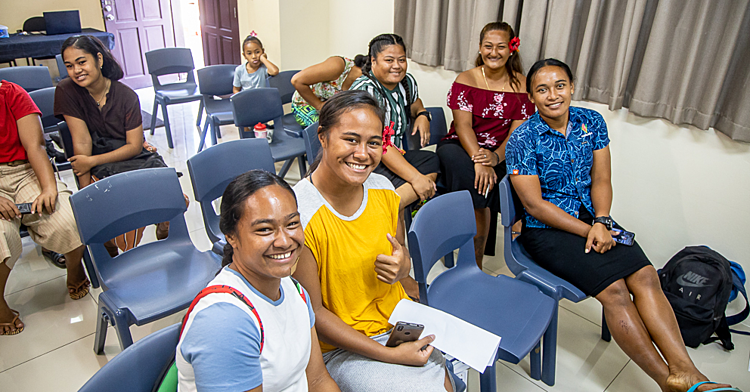