Investigation against A.C.E.O. 'on hold'

A Public Service Commission (P.S.C.) investigation into a suspended Assistant Chief Executive Officer of the Ministry of Agriculture and Fisheries (M.A.F.) has been put on hold, pending the outcome of a criminal hearing.

The suspension of the P.S.C.'s investigation into Lupeomanu Pelenato Fonoti's case was confirmed in a letter from the Commission's Chairman, Aiono Mose Sua.

The letter, sent on Friday, was addressed to complainant, Papali’i Panoa Moala, who first filed a complaint against Lupeomanu with the P.S.C. in August.

The investigation stems from an incident in August last year when Papali'i alleged that an altercation broke out during an M.A.F. boardroom meeting where he was punched.

Lupeomanu strenuously denies the allegations, which are currently before the District Court.

Earlier this week, Papali'i said he was prepared to initiate legal action against the P.S.C. to force them to reveal the status of the investigation and whether disciplinary action had been laid against Lupeomanu.

In response to queries about the delay, Aiono’s letter confirmed that the P.S.C. was proceeding with charges against Lupeomanu.

But he said that because their investigation would cross over with pending court proceedings, it needed to be suspended.

“This decision was made given the matter is before the courts. The advice we received was the Court case was to take place on 13 December, 2019. We understand that this has been delayed and we have been following up on the new date set by the Courts," Aiono wrote in a letter, dated January 10.

“To prove the charges brought under the P.S.C. proceedings would require the same witnesses (i.e. evidence) that will likely be called before the Courts in the criminal trial. It is for this reason that we have determined to let the criminal proceedings take place unimpeded.”

Aiono noted they initiated a preliminary inquiry into the incident on August 16 last year shortly after they were informed about the allegations.

Papali'i simultaneously filed complaints against Lupeomanu with the Police and the P.S.C.

Later that month Lupeomanu was charged with one count of assault and bailed.

The matter is proceeding through the District Court.

“The outcome of the preliminary inquiry resulted in several charges against Lupeomanu and these charges were served on 6 September, 2019. On 13 September, 2019 Lupeomanu through Counsel denied all charges," Aiono's letter read.

"His Counsel also requested that we [withdraw] the charges and let the criminal proceedings take place unimpeded. We declined the request to withdraw charges.”

Aiono also noted that Lupeomanu remained suspended from his position without pay.

Copies of the letter were sent to the Prime Minister, Tuilaepa Dr. Sa'ilele Malielegaoi, the Minister for the M.A.F, Lopaoo Natanielu Mua, and the Ministry's Chief Executive Officer, Tilafono David Hunter. 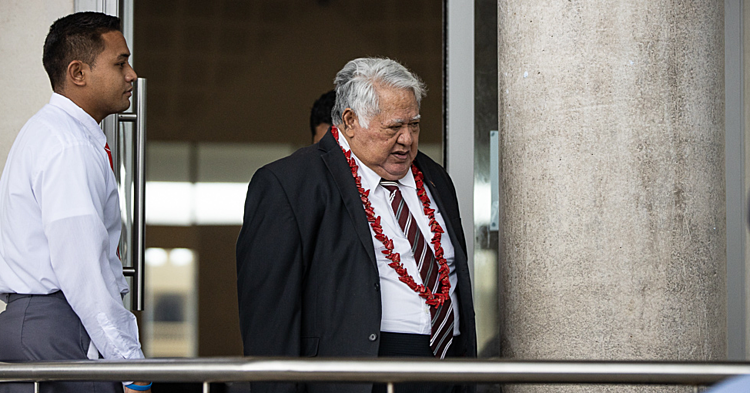